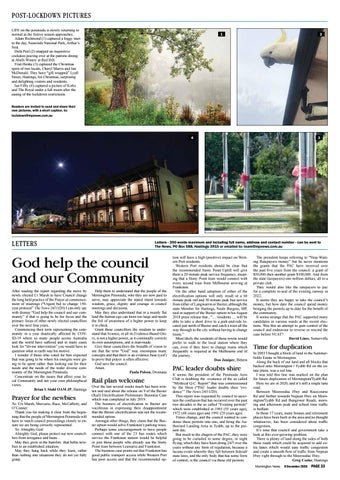 POST-LOCKDOWN PICTURES LIFE on the peninsula is slowly returning to normal as the festive season approaches. Adam Richmond (1) captured a foggy start to the day, Seawinds National Park, Arthur’s Seat. Defa Peel (2) snapped an inquisitive cockatoo peering over at the patrons dining at Abelli Winery at Red Hill. Fran Henke (3) captured the Christmas spirit of two locals, Cheryl Marris and Jan McDonald. They have “gift wrapped” Lyall Street, Hastings, for Christmas, surprising and delighting visitors and residents. Ian Filby (4) captured a picture of Kirks and The Royal under a full moon after the easing of the lockdown restrictions.

Readers are invited to send and share their own pictures, with a short caption, to: lockdown@mpnews.com.au

God help the council and our Community After reading the report regarding the move by newly elected Cr Marsh to have Council change the long held practice of the Prayer at commencement of meetings (“Urgent bid to change 150year protocol” The News 24/11/20) I can only say with dismay “God help the council and our community” if that is going to be his focus and the primary focus of other newly elected councillors over the next four years. Commencing their term representing the community in a year drastically affected by COVID-19 where so many people across Australia and the world have suffered and in many cases look for “divine intervention” you would have to question what in earth was his motive. I wonder if those who voted for him expected that was going to be where his energies were going to be spent rather than looking out for their needs and the needs of the wider diverse community of the Mornington Peninsula. Concentrate on the issues that affect your local Community and not your own philosophical views. Brian L Stahl OAM JP, Hastings

Prayer for the newbies

To: Crs Marsh, Mercurio, Race, McCafferty, and O’Conner: Thank you for making it clear from the beginning that the people of Mornington Peninsula will have to watch council proceedings closely to ensure we are being correctly represented. To: Almighty God: Almighty God, please protect our new councillors from arrogance and haste. May they grow in the humility that befits newbies to an established situation. May they hang back while they learn, rather than rushing into situations they do not yet fully grasp.

Help them to understand that the people of the Mornington Peninsula, who they are now paid to serve, may appreciate the stated intent towards wisdom, grace, dignity and courage in council meetings and decisions. May they also understand that in a mainly flat land the human ego can loom too large and needs the foil of awareness of a higher power to keep it in check. Grant these councillors the wisdom to understand that Science, in all its Evidence-Based Glory, is not a higher power, as it continually corrects its own assumptions, and is man-made. Give these councillors the breadth of vision to see that the term “God” may encompass many concepts and that there is an evidence base (yes!) to prove that prayer is often effective. God save the council. Amen. Paula Polson, Dromana

Over the last several weeks much has been written and said about the release on 9 of the Baxter (Rail) Electrification Preliminary Business Case which was completed in July 2019. The boosters of electrification to Baxter are vociferous in expressing their disappointment that the Baxter electrification was not the recommended option. Amongst other things, they claim that the Baxter option would solve Frankston’s parking woes. Perhaps some encouragement to have people connect with one of the 23 bus routes which service the Frankston station would be helpful or join those people who already use the Stony Point train between Leawarra and Frankston. The business case points out that Frankston has good public transport access while Western Port has poor access and that the recommended op-

tion will have a high (positive) impact on Western Port residents. Western Port residents should be clear that the recommended Stony Point Uplift will give them a 20 minute peak service frequency, meaning that a Stony Point train would connect with every second train from Melbourne arriving at Frankston. On the other hand adoption of either of the electrification options will only result in a 60 minute peak rail and 30 minute peak bus service from either of Langwarrin or Baxter, although the state Member for Hastings, Neale Burgess, MP, said in support of the Baxter option in his August 2018 press release that , “… residents … will be able to take a short drive to a park‑and‑ride located just north of Baxter and catch a train all the way through to the city without having to change trains.” Most likely the residents of those towns would prefer to walk to the local station where they can, even if they have to change trains which frequently is required at the Melbourne end of the journey. Don Juniper, Bittern

It seems the president of the Peninsula Aero Club is doubting the existence of the so called “Mythical Q.C. Report” that was commissioned by the Shire (“PAC leader doubts shire ‘evidence’” The News 24/11/20). This report was requested by council to ascertain the confusion that has occurred over the past two decades re the so called “Existing permits” which were established in 1965 (55 years ago), 1972 (48 years ago) and 1991 (29 years ago). Times change, and the council wanted to condense these permits into one, and bring the Authorised Landing Area in Tyabb, up to the present day. But much to the chagrin of the PAC, they were going to be curtailed to some degree, in night flying, which they have been doing 24/7 over the years without any form of regulation, because a lacuna exists whereby they fall between federal/ state laws, and the only body that has some form of control, is the council via these old permits.

The president keeps referring to “Stop Wasting Ratepayers money” but he never mentions the grants that the PAC have received over the past five years from the council: a grant of $50,000 then another grant $100,000. And from the state (taxpayers) one million dollars, all to a private club. They would also like the ratepayers to pay for a complete re-seal of the existing runway in 2022. It seems they are happy to take the council’s money, but how dare the council spend money bringing the permits up to date for the benefit of the community. It seems strange that the PAC supported many candidates in various wards at the recent elections. Was this an attempt to gain control of the council and endeavour to reverse or rescind the case before VCAT? David Lines, Somerville

In 2003 I bought a block of land in the Summerfields Estate in Mornington. Along the back of our land and all blocks that backed onto Mornington / Tyabb Rd on the estate plans, was a red line. I was told this line was marked on the plan for future duplication of Mornington/Tyabb Rd. Here we are in 2020, and it’s still a single lane road. Between Moorooduc Hwy and Racecourse Rd and further towards Nepean Hwy on Mornington/Tyabb Rd and Bungower Roads, morning and afternoon peak and school time traffic is bedlam. In those 17 years, many houses and retirement places have been built in the area and no thought whatsoever, has been considered about traffic congestion. It’s time that council and government take a look at this ever-growing problem. There is plenty of land along the sides of both these roads which could be acquired to add extra lanes which would ease traffic congestion and create a smooth flow of traffic from Nepean Hwy right through to the Moorooduc Hwy. Greg Cooke, Hastings Mornington News