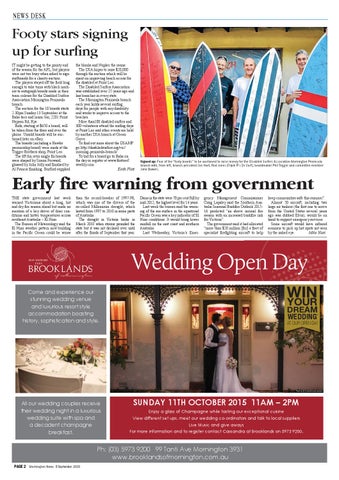 Footy stars signing up for surfing IT might be getting to the pointy end of the season for the AFL, but players were not too busy when asked to sign surfboards for a charity auction. The players stayed off the field long enough to take turns with black markers to autograph boards made in their team colours for the Disabled Surfers Association Mornington Peninsula branch. The auction for the 18 boards starts 2.30pm Sunday 13 September at the Baha taco and music bar, 2201 Point Nepean Rd, Rye. Bids, starting at $650 a board, will be taken from the floor and over the phone. Unsold boards will be auctioned later on eBay. The boards (including a Hawks premiership board) were made at the Trigger Brothers shop, Point Leo. The 6ft 6in retro single fin boards were shaped by Simon Forward, glassed by John Jolly and finished by Al Francis finishing. Burford supplied

the blanks and Nuplex the resins. The DSA hopes to raise $20,000 through the auction which will be spent on improving beach access for the disabled at Point Leo. The Disabled Surfers Association was established over 25 years ago and has branches in every state. The Mornington Peninsula branch each year holds several surfing days for people with any disability and works to improve access to the beaches. More than100 disabled surfers and 300 volunteers attend the surfing days at Point Leo and other events are held by another DSA branch at Ocean Grove. To find out more about the DSAMP go http://disabledsurfers.org/vic/ morning-peninsula-branch/ To bid for a board go to Baha on the day or register at www.firstreef. weebly.com Keith Platt

Early fire warning from government THE state government last week warned Victorians about a long, hot and dry fire season ahead but made no mention of a key driver of drier conditions and hotter temperatures across southeast Australia – El Nino. The Bureau of Meteorology said the El Nino weather pattern now building in the Pacific Ocean could be worse

than the record-breaker of 1997-98, which was one of the drivers of the so-called Millennium drought, which lasted from 1995 to 2010 in some parts of Australia. The drought in Victoria broke in March 2010 when storms pounded the state but it was not declared over until after the floods of September that year.

Dams in the state were 70 per cent full by mid-2012, the highest level for 14 years. Last week the bureau said the warming of the sea surface in the equatorial Pacific Ocean was a key indicator of El Nino conditions. It would bring lower rainfall on the east coast and southern Australia. Last Wednesday, Victoria’s Emer-

gency Management Commissioner Craig Lapsley said the Southern Australia Seasonal Bushfire Outlook 201516 predicted “an above normal fire season with an increased bushfire risk for Victoria”. The government said it had allocated “more than $20 million [for] a fleet of specialist firefighting aircraft to help

keep communities safe this summer”. Almost 50 aircraft, including two large air tankers (the first one to arrive from the United States several years ago was dubbed Elvis), would be on hand to support emergency services. Some aircraft would have infrared scanners to pick up hot spots not seen by the naked eye. Mike Hast

AT OUR OPEN DAY

All our wedding couples receive their wedding night in a luxurious wedding suite with spa and a decadent champagne breakfast.

SUNDAY 11TH OCTOBER 2015 11AM – 2PM Enjoy a glass of Champagne while tasting our exceptional cuisine View different set ups, meet our wedding co-ordinators and talk to local suppliers Live Music and give aways For more information and to register contact Cassandra at Brooklands on 5973 9200.