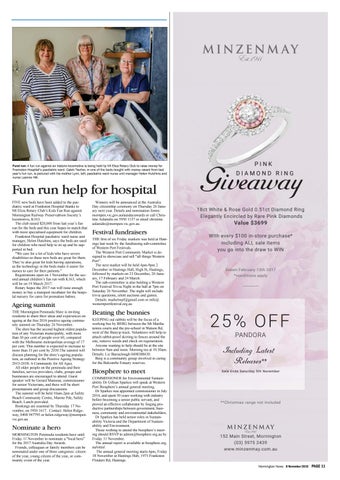 Fund run: A fun run against an historic locomotive is being held by Mt Eliza Rotary Club to raise money for Frankston Hospital’s paediatric ward. Caleb Tischer, in one of the beds bought with money raised from last year’s fun run, is pictured with his mother Lynn, left, paediatric ward nurse unit manager Helen Hutchins and nurse Leanne Hill.

Fun run help for hospital FIVE new beds have been added to the paediatric ward at Frankston Hospital thanks to Mt Eliza Rotary Club’s Kids Fun Run against Mornington Railway Preservat6ion Society’s locomotive, K163. The club raised $20,000 from last year’s fun run for the beds and this year hopes to match that with more specialised equipment for children. Frankston Hospital paediatric ward nurse unit manager, Helen Hutchins, says the beds are used for children who need help to sit up and be supported in bed. “We care for a lot of kids who have severe disabilities so these new beds are great for them. They’re also great for kids having operations, as the technology in the beds make it easier for nurses to care for their patients." Registrations open on 1 November for the second annual children’s fun run with K163, which will be on 19 March 2017. Rotary hopes the 2017 run will raise enough money to buy a transport incubator for the hospital nursery for cares for premature babies.

Ageing summit THE Mornington Peninsula Shire is inviting residents to share their ideas and experiences on ageing at the free 2016 positive ageing community summit on Thursday 24 November. The shire has the second highest oldest population of any Victorian municipality, with more than 30 per cent of people over 60, compared with the Melbourne metropolitan average of 17 per cent. This number is expected to increase to more than 33 per cent by 2030.The summit will discuss planning for the shire’s ageing population, as outlined in the Positive Ageing Strategy 2013-2018: A Community for All Ages. All older people on the peninsula and their families, service providers, clubs, groups and businesses are encouraged to attend. Guest speaker will be Gerard Mansour, commissioner for senior Victorians, and there will be short presentations and group discussions. The summit will be held 10am-2pm at Safety Beach Community Centre, Marine Pde, Safety Beach. Lunch provided. Bookings are essential by Thursday 17 November, on 5950 1617. Contact: Helen Ridgeway, 0408 947795 or helen.ridgeway@mornpen. vic.gov.au

Winners will be announced at the Australia Day citizenship ceremony on Thursday 26 January next year. Details and nomination forms: mornpen.vic.gov.au/ausdayawards or call Christine Aslanidis on 5950 1137 or email christine. aslanidis@mornpen.vic.gov.au.

Festival fundraisers THE first of six Friday markets was held at Hastings last week by the fundraising sub-committee of Western Port Festivals. The Western Port Community Market is designed to showcase and sell “all things Western Port”. The next market will be held 4pm-9pm 2 December in Hastings Hall, High St, Hastings, followed by markets on 23 December, 20 January, 17 February and 24 March. The sub-committee is also holding a Western Port Festival Trivia Night in the hall at 7pm on Saturday 26 November. The night will include trivia questions, silent auctions and games. Details: marketwpf@gmail.com or info@ westernportfestival.org.au

Beating the bunnies KEEPING out rabbits will be the focus of a working bee by BERG between the Mt Martha tennis courts and the pre-school in Watson Rd, west of the Bunyip track. Volunteers will help to attach rabbit-proof skirting to fences around the site, remove weeds and check on regeneration. Anyone wanting to help should be at the site between 9am and noon. Morning tea at 10.30am. Details: Liz Barraclough 0408388430. Berg is a community group involved in caring for the Balcombe Estuary reserves.