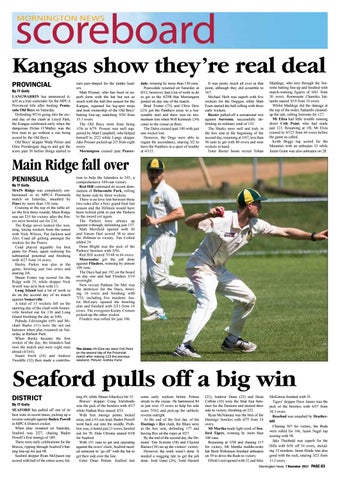 By IT Gully LANGWARRIN has announced itself as a true contender for the MPCA Provincial title after beating Peninsula Old Boys on Saturday. Defending 9/216 going into the second day of the clash at Lloyd Park, the Kangas celebrated early when the dangerous Dylan O’Malley was the first man to go without a run being scored by the Old Boys. Old Boys’ skipper Wade Pelzer and Glen Prendergast dug-in and got the score past 50 before things started to

turn pair-shaped for the ladder leaders. Matt Prosser, who has been in superb form with the bat but not so much with the ball this season for the Kangas, regained his leg-spin mojo and took ownership of the Old Boys’ batting line-up, snatching 5/36 from 15.1 overs. The Old Boys went from being 1/56 to 6/79. Prosser was well supported by Matt Campbell, who helped himself to 2/22 while Langy skipper Jake Prosser picked-up 2/3 from eight overs. Mornington cruised past Pearce-

dale, winning by more than 130 runs. Pearcedale resumed on Saturday at 0/12, however, had a lot of work to do to get to the 4/298 that Mornington posted on day one of the match. Brad Trotter (73) and Chris Dew (25) got the Panthers away to a reasonable start and there was no momentum lost when Will Kennedy (34) came to the crease at three. The Dales cruised past 100 with just one wicket lost. However, the Dogs were able to regain the ascendancy, snaring 3/2 to have the Panthers in a sport of trouble at 4/115.

It was pretty much all over at that point, although they did scramble to 167. Michael Heib was superb with five wickets for the Doggies while Matt Foon started the ball rolling with three early wickets. Baxter pulled-off a sensational win against Sorrento, successfully defending its ordinary total of 133. The Sharks were well and truly in the box seat at the beginning of the second day, resuming at 1/47, less than 90 runs to get with 80 overs and nine wickets in hand. Enter Baxter boom recruit Yohan

Maddege, who tore through the Sorrento batting line-up and finished with match-winning figures of 6/61 from 30 overs. Roommate Chamika Sattambi snared 3/19 from 10 overs. Whilst Maddege did the damage at the top of the order, Sattambi cleanedup the tale, rolling Sorrento for 127. Mt Eliza had little trouble running down Crib Point, who had made just 123. Resuming at 1/8, Mt Eliza cruised to 4/125 from 66 overs before the game as called. Keith Beggs top scored for the Mounties with an unbeaten 33 while Justin Grant was also unbeaten on 28.

By IT Gully MAIN Ridge was completely embarrassed in its MPCA Peninsula match on Saturday, smashed by Pines by more than 150 runs. Cruising at the top of the table after the first three rounds, Main Ridge was set 235 for victory after the Piners were bowled out for 234. The Ridge never looked like winning, losing wickets from the outset with Nick Wilcox, Pat Jackson and Alex Coad all getting amongst the wickets for the Piners. Coad played arguably his best game for Pines, again realising his substantial potential and finishing with 4/27 from 14 overs. Harley Parker was also in the game, bowling just two overs and snaring 2/6. Shaun Foster top scored for the Ridge with 33, while skipper Nick Jewell was next best with 13. Long Island had a lot of work to do on the second day of its match against Somerville. A total of 13 wickets fell on the opening day of the clash with Somerville bowled out for 136 and Long Island finishing the day at 3/46. Pubudu Edirisinghe (69) and Michael Burke (51) were the not out batsmen when play resumed on Saturday at Ballam Park. When Burke became the first wicket of the day, the Islanders had won the match and were eight runs ahead (4/144). Stuart Swift (24) and Andrew Tweddle (32) then made a contribu-

tion to help the Islanders to 245, a comprehensive 109-run victory. Red Hill continued its recent domination of Delacombe Park, rolling the home side by three wickets. There is no love lost between these two sides after a fiery grand final last season and the Hillmen would have been tickled pink to put the Parkers to the sword yet again. The Parkers were always up against it though, defending just 137. Matt Merifield opened with 40 and Simon Dart scored 38 to steer the Hillmen to victory. Tim Collett added 24. Dean Blight was the pick of the Parkers’ bowlers with 3/56. Red Hill scored 7/148 in 64 overs. Moorooduc got the job done against Flinders, winning by almost 100 runs. The Ducs had put 192 on the board on day one and had Flinders 1/14 overnight. New recruit Pathum De Mel was the destroyer for the Ducs, bowling 16 overs and finishing with 7/35, including five maidens. Justin McLeary opened the bowling also and finished with 2/31 from 14 overs. The evergreen Kenny Cremen picked-up the other wicket. Flinders was rolled for just 106.

The chase: Mt Eliza ran down Crib Point on the second day of the Provincial match after making 123 the previous weekend. Picture: Andrew Hurst

By IT Gully SEAFORD has pulled off one of its best wins in recent times, picking up a reverse outright against Baden Powell in MPCA District cricket. When play resumed on Saturday, Seaford was 2/27, chasing Baden Powell’s first innings of 189. There were early celebrations for the Braves, ripping through Seaford’s batting line-up for just 98. Seaford skipper Ryan McQueen top scored with half of the entire score, hit-

ting 49, while Shaun Allardyce hit 15. Braves’ skipper Craig Entwhistle was the pick of the bowlers with 4/17 while Nathan Rice snared 3/33. With first innings points locked away and a 91-run lead, Baden Powell went back out into the middle. Problem was, it lasted just 21 overs, bowled out for 70. Dale Christie snared 6/18 for Seaford. With 151 runs to get and operating against the overs’ clock, Seaford needed someone to ‘go off’ with the bat to get their side over the line. Enter Dean Polson. Seaford lost

some early wickets before Polson strode to the crease. He hammered 84 in just over 15 overs to help his side score 7/162 and pick-up the unlikely reverse outright. At the end of the first day of the Hastings v Rye clash, the Blues were in the box seat, defending 177 and having Rye on the ropes at 3/27. By the end of the second day, the Demons’ Tim Symons (58) and Clayton Barnes (34) set up the visitors’ victory. However, the work wasn’t done. It needed a wagging tale to get the job done. Josh Gana (26), Todd Harnett

(21), Andrew Dunn (25) and Dean Collins (10) were the final four batsmen for the Demons and steered their side to victory, finishing on 222. Ryan McNamara was the best of the Hastings’ bowlers with 4/75 from 24 overs. Mt Martha made light work of Seaford Tigers, winning by more than 100 runs. Resuming at 1/38 and chasing 117 for victory, Mt Martha middle-order bat Brett Wilkinson finished unbeaten on 59 to drive the Reds to victory. Elliott Lord opened with 32 and Max

McKenzie finished with 35. Tigers’ skipper Dave James was the pick of the bowlers with 4/37 from 18.3 overs. Rosebud was smashed by Heatherhill. Chasing 307 for victory, the Buds were rolled for 166, Jason Nagel top scoring with 58. Jake Theobald was superb for the Hills with 6/56 off 34 overs, including 12 maidens. Jason Hinde was also good with the rock, snaring 3/25 from 11.3 overs.