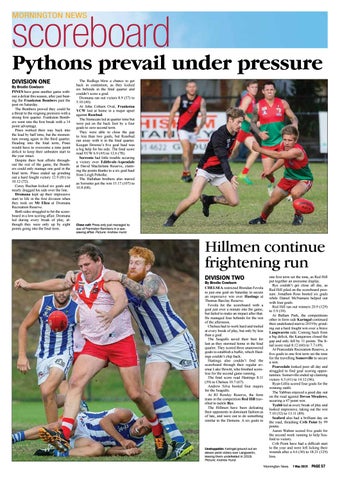 Pythons prevail under pressure DIVISION ONE

By Brodie Cowburn PINES have gone another game without a defeat this season, after just beating the Frankston Bombers past the post on Saturday. The Bombers proved they could be a threat to the reigning premiers with a strong first quarter. Frankston Bombers went into the first break with a 14 point advantage. Pines worked their way back into the lead by half time, but the momentum swung again in the third quarter. Heading into the final term, Pines would have to overcome a nine point deficit to keep their unbeaten start to the year intact. Despite their best efforts throughout the rest of the game, the Bombers could only manage one goal in the final term. Pines ended up grinding out a hard fought victory 12.9 (81) to 10.12 (72). Corey Buchan kicked six goals and nearly dragged his side over the line. Dromana kept up their impressive start to life in the first division when they took on Mt Eliza at Dromana Recreation Reserve. Both sides struggled to hit the scoreboard in a low scoring affair. Dromana led during every break of play, although they were only up by eight points going into the final term.

The Redlegs blew a chance to get back in contention, as they kicked six behinds in the final quarter and couldn’t score a goal. Dromana ran out victors 8.9 (57) to 5.10 (40). At John Coburn Oval, Frankston YCW lost at home in a major upset against Rosebud. The Stonecats led at quarter time but were put on the back foot by a four goals to zero second term. They were able to close the gap to less than two goals, but Rosebud ran away with it in the final quarter. Keegan Downie’s five goal haul was a big help for his side. The final score read YCW 6.9 (45) to 12.6 (78). Sorrento had little trouble securing a victory over Edithvale-Aspendale at David Macfarlane Reserve, claiming the points thanks to a six goal haul from Leigh Poholke. The Hallahan brothers also starred as Sorrento got the win 15.17 (107) to 10.8 (68).

By Brodie Cowburn CHELSEA restricted Brendan Fevola to just one goal on Saturday to secure an impressive win over Hastings at Thomas Barclay Reserve. Fevola hit the scoreboard with a goal just over a minute into the game, but failed to make an impact after that. He managed four behinds for the rest of the afternoon. Chelsea had to work hard and trailed at every break of play, but only by less than a goal. The Seagulls saved their best for last as they stormed home in the final quarter. They scored three unanswered goals to establish a buffer, which Hastings couldn’t chip back. Hastings also couldn’t find the scoreboard through their regular avenue Luke Hewitt, who finished scoreless for the second game running. The final score read Hastings 8.11 (59) to Chelsea 10.7 (67). Andrew Silva booted four majors for the Seagulls. At RJ Rowley Reserve, the form team in the competition Red Hill travelled to tackle Rye. The Hillmen have been defeating their opponents in dominant fashion as of late, and were out to do something similar to the Demons. A six goals to

one first term set the tone, as Red Hill put together an awesome display. Rye couldn’t get close all day, as Red Hill piled on the scoreboard pressure. Jonathon Ross booted six goals while Daniel McNamara helped out with four goals. Red Hill ran out winners 20.9 (129) to 5.9 (39). At Ballam Park, the competitions other in form side Karingal continued their undefeated start to 2019 by grinding out a hard fought win over a brave Langwarrin side. Coming back from a big deficit, the Kangaroos closed the gap and only fell by 11 points. The final score read 8.12 (60) to 7.7 (49). At Pearcedale Recreation Reserve, a five goals to one first term set the tone for the travelling Somerville to secure a win. Pearcedale looked poor all day and struggled to find goal scoring opportunities. Somerville ended up claiming victory 6.5 (41) to 14.12 (96). Ryan Gillis scored four goals for the winning outfit. The Yabbies enjoyed a good day out on the road against Devon Meadows, securing a 47 point win. Tyabb led at every break of play and looked impressive, taking out the win 7.10 (52) to 13.11 (89). Seaford also had a brilliant day on the road, thrashing Crib Point by 99 points. Aaron Walton scored five goals for the second week running to help Seaford to victory. Crib Point have had a difficult start to the year and were left licking their wounds after a 4.6 (30) to 18.21 (129) loss. Mornington News