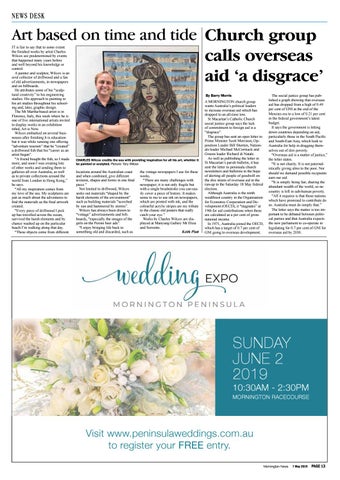 Art based on time and tide Church group

IT is fair to say that to some extent the finished works by artist Charles Wilcox are predetermined by events that happened many years before and well beyond his knowledge or control. A painter and sculptor, Wilcox is an avid collector of driftwood and a fan of old advertisements, in newspapers and on billboards. He attributes some of his “sculptural creativity” to his engineering studies. His approach to painting to his art studies throughout his schooling and, later, graphic design. The Mt Martha-based artist is in Florence, Italy, this week where he is one of five international artists invited to display works in an exhibition titled, Art is Now. Wilcox embarked on several businesses after finishing h is education but it was while running one offering “adventure tourism” that he “created” a driftwood fish that his “career as an artist began”. “A friend bought the fish, so I made more, and soon I was creating lots of other works and sending them to galleries all over Australia, as well as to private collections around the world from London to Hong Kong,” he says. “All my inspiration comes from my love of the sea. My sculptures are just as much about the adventures to find the materials as the final artwork created. “Every piece of driftwood I pick up has travelled across the ocean, survived the harsh elements and by chance washed up on the particular beach I’m walking along that day. “These objects come from different

CHARLES Wilcox credits the sea with providing inspiration for all his art, whehter it be painted or sculpted. Picture: Tory Wilcox

locations around the Australian coast and when combined, give different textures, shapes and forms in one final piece.” Not limited to driftwood, Wilcox seeks out materials “shaped by the harsh elements of the environment” such as building materials “scorched by sun and hammered by storms”. Wilcox has always been drawn to “vintage” advertisements and billboards, “especially the images of the girls on the Peroni beer ads”. “I enjoy bringing life back to something old and discarded, such as

the vintage newspapers I use for these works. “There are many challenges with newspaper; it is not only fragile but with a single brushstroke you can easily cover a piece of history. It makes sense to me to use ink on newspapers, which are printed with ink, and the colourful acrylic stripes are my tribute to the classic old posters that really catch your eye.” Works by Charles Wilcox are displayed at Manyung Gallery Mt Eliza and Sorrento. Keith Platt

A MORNINGTON church group wants Australia’s political leaders to increase overseas aid which has dropped to an all-time low. St Macartan’s Catholic Church social justice group says the lack of commitment to foreign aid is a “disgrace”. The group has sent an open letter to Prime Minister Scott Morrison, Opposition Leader Bill Shorten, Nationals leader Michael McCormack and Greens leader Richard di Natale. As well as publishing the letter in St Macartan’s parish bulletin, it has sent the letter to peninsula church newsletters and bulletins in the hope of alerting all people of goodwill on the dire straits of overseas aid in the run-up to the Saturday 18 May federal election. Although Australia is the ninth wealthiest country in the Organisation for Economic Cooperation and Development (OECD), it “stagnates” at 19th for aid contributions when these are calculated as a per cent of gross national income. In 1971, Australia joined the OECD, which has a target of 0.7 per cent of GNI going to overseas development.

The social justice group has published a graph showing that overseas aid has dropped from a high of 0.49 per cent of GNI at the end of the Menzies era to a low of 0.21 per cent in the federal government’s latest budget. It says the government is letting down countries depending on aid, particularly those in the South Pacific and South-East Asia, which look to Australia for help in dragging themselves out of dire poverty. “Overseas aid is a matter of justice,” the letter states. “It is not charity. It is not paternalistically giving alms to the poor. Nor should we demand possible recipients earn our aid. “It is simply being fair, sharing the abundant wealth of the world, so no country is left in sub-human poverty. “All it requires is that those nations which have promised to contribute do so. Australia must do simply that.” The letter says the matter is too important to be debated between political parties and that Australia expects the new parliament to co-operate in legislating for 0.7 per cent of GNI for overseas aid by 2030.