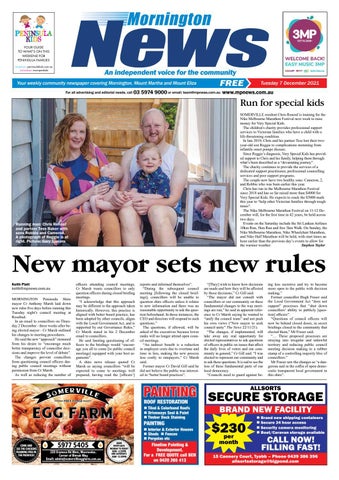 Mornington YOUR GUIDE TO WHAT’S ON THIS WEEKEND FOR PENINSULA FAMILIES FACEBOOK:

Run for special kids SOMERVILLE resident Chris Renouf is training for the Nike Melbourne Marathon Festival next week to raise money for Very Special Kids. The children&#39;s charity provides professional support services to Victorian families who have a child with a life-threatening condition. In late 2019, Chris and his partner Tess lost their twoyear-old son Reggie to complications stemming from infantile onset pompe disease. Since Reggie’s diagnosis, Very Special Kids has provided support to Chris and his family, helping them through what’s been described as a “devastating journey”. The charity continues to provide the services of a dedicated support practitioner, professional counselling services and peer support programs. The couple now have two healthy sons: Cameron, 2, and Robbie who was born earlier this year. Chris has run in the Melbourne Marathon Festival since 2018 and has so far raised more than $4000 for Very Special Kids. He expects to crack the $5000 mark this year to “help other Victorian families through tough times”. The Nike Melbourne Marathon Festival on 11-12 December will, for the first time in 42 years, be held across two days. Events on the Saturday include the Sri Lankan Airlines 10km Run, 5km Run and free 3km Walk. On Sunday, the Nike Melbourne Marathon, Nike Wheelchair Marathon, and Nike Half Marathon will be held, with start times an hour earlier than the previous day’s events to allow for the warmer weather. Stephen Taylor

Running man: Chris Renouf and partner Tess Baker with sons Robbie and Cameron. A photograph of Reggie is at right. Picture: Gary Sissons

New mayor sets new rules Keith Platt keith@mpnews.com.au MORNINGTON Peninsula Shire mayor Cr Anthony Marsh laid down new rules five days before running this Tuesday night’s council meeting at Rosebud. In an email to councillors on Thursday 2 December - three weeks after being elected mayor - Cr Marsh outlined his changes to meeting procedures. He said the new “approach” stemmed from his desire to “encourage much better transparency of councillor decisions and improve the level of debate”. The changes prevent councillors from questioning council officers during public council meetings without permission from Cr Marsh. As well as reducing the number of

officers attending council meetings, Cr Marsh wants councillors to only question officers during closed briefing meetings. “I acknowledge that this approach may be different to the approach taken historically. However, this practice is aligned with better board practice, has been adopted by other councils, aligns with the Local Government Act, and is supported by our Governance Rules,” Cr Marsh stated in his 2 December email to councillors. He said limiting questioning of officers to the briefings would “encourage you all to come [to public council meetings] equipped with your best arguments”. A shire news release quoted Cr Marsh as saying councillors “will be expected to come to meetings well prepared, having read the [officers’]

reports and informed themselves”. “During the subsequent council meeting [following the closed briefings], councillors will be unable to question shire officers unless it relates to new information and there was no reasonable opportunity to ask the question beforehand. In those instances, the CEO and directors will respond to such questions.” The questions, if allowed, will be asked of the executives because lower ranks will no longer attend open council meetings. “An indirect benefit is a reduction in employee costs due to overtime and time in lieu, making the new process less costly to ratepayers,” Cr Marsh said. Former mayor Cr David Gill said he did not believe the public was interested in “better board practices”.

“[They] wish to know how decisions are made and how they will be affected by those decisions,” Cr Gill said. “The mayor did not consult with councillors or our community on these fundamental changes to the way meetings are run,” he said in apparent reference to Cr Marsh saying he wanted to “unify the council team” and not push his own views (“New mayor to seek council unity” The News 22/11/21). “The changes, if implemented, will take away any real opportunity for elected representatives to ask questions of officers in public on issues that affect the daily lives of voters and our community in general,” Cr Gill said. “I was elected to represent our community and to ask these questions. It is sad to see the loss of these fundamental parts of our local democracy. “Councils need to guard against be-

ing less secretive and try to become more open to the public with decision making.” Former councillor Hugh Fraser said the Local Government Act “does not support” processes that “shut down councillors’ ability to publicly [question] officers”. “Questions of council officers will now be behind closed doors, in secret briefings closed to the community that elected them,” Mr Fraser said. “… These proposed processes are straying into irregular and unlawful territory and reducing public council meeting decision making to a rubber stamp of a controlling majority bloc of councillors.” Mr Fraser saw the changes as “a dangerous nail in the coffin of open democratic transparent local government in this shire”.