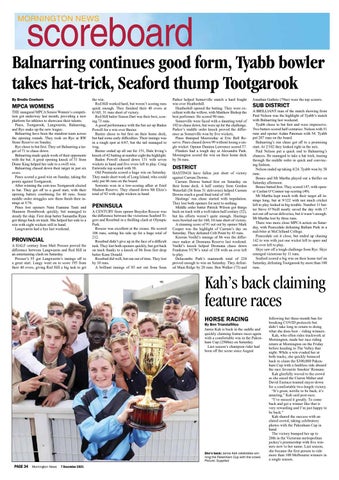 THE inaugural MPCA Senior Women’s competition got underway last month, providing a new platform for athletes to showcase their talents. Pines, Tootgarook, Langwarrin, Balnarring, and Rye make up the new league. Balnarring have been the standout team across the opening rounds. They took on Rye at RW Stone Reserve on Sunday. Rye chose to bat first. They set Balnarring a target of 71 to chase down. Balnarring made quick work of their opponents with the bat. A great opening knock of 51 from Diane King helped her side to a swift win. Balnarring chased down their target in just six overs. Pines scored a good win on Sunday, taking the points against Tootgarook. After winning the coin toss Tootgarook elected to bat. They got off to a good start, with their opening batters combining for 40 runs. Some middle order struggles saw them finish their innings at 5/76. Pines lost openers Natu Faanana Tauti and Shannon Hornibrook quickly, but managed to steady the ship. First drop batter Samantha Ryan got things back on track. She helped her side to a win with eight wickets still in hand. Langwarrin had a bye last weekend.

A HALF century from Matt Prosser proved the difference between Langwarrin and Red Hill in an entertaining clash on Saturday. Prosser’s 55 got Langwarrin’s innings off to a great start. Langy went on to score 195 from their 40 overs, giving Red Hill a big task to get

the win. Red Hill worked hard, but weren’t scoring runs quick enough. They finished their 40 overs at 6/165, 31 runs short of victory. Red Hill batter Simon Dart was their best, scoring 73 runs. A good performance with the bat set up Baden Powell for a win over Baxter. Baxter chose to bat first on their home deck, but had some early difficulties. Their innings was in a rough spot at 6/67, but the tail managed to wag. Baxter ended up all out for 151, Dale Irving’s knock of 42 batting at number eight the highlight. Baden Powell chased down 151 with seven wickets in hand and five overs left to play. Craig Entwistle top scored with 38. Old Peninsula scored a huge win on Saturday. They made short work of Long Island, who could only put 86 runs on the board. Sorrento won in a low-scoring affair at Emil Madsen Reserve. They chased down Mt Eliza’s total of 92 with eight wickets in hand.

A CENTURY from opener Brayden Roscoe was the difference between the victorious Seaford Tigers and Rosebud in a thrilling clash at Olympic Park. Roscoe was excellent at the crease. He scored 106 runs, setting his side up for a huge total of 212. Rosebud didn’t give up in the face of a difficult task. They lost both openers quickly, but got back on track thanks to a knock of 86 from first drop batter Kane Donald. Rosebud did well, but ran out of time. They lost by 10 runs. A brilliant innings of 85 not out from Sean

Parker helped Somerville snatch a hard fought win over Heatherhill. Heatherhill opened the batting. They were excellent with the willow, with Matthew Bishop the best performer. He scored 90 runs. Somerville were faced with a daunting total of 192 to chase down, but were up for the challenge. Parker’s middle order knock proved the difference as Somerville won by five wickets, Pines thumped Moorooduc at Eric Bell Reserve. Pines chased down 99 without losing a single wicket. Opener Damien Lawrence scored 57. Flinders had a tough day at Alexandra Park. Mornington scored the win on their home deck by 56 runs.

HASTINGS have fallen just short of victory against Carrum Downs. Carrum Downs batted first on Saturday on their home deck. A half century from Gordon Waterfall (56 from 51 deliveries) helped Carrum Downs reach a good final total of 169. Hastings’ run chase started with trepidation. They lost both openers for next to nothing. Middle order batter Patrick Wilson got things back on track with a well-taken half century (52), but his efforts weren’t quite enough. Hastings were bowled out for 160, 10 runs short of victory. A stunning score of 91 not out by opener Mark Cooper was the highlight of Carrum’s day on Saturday. They defeated Crib Point by 43 runs. Kierran Voelkl’s innings of 86 was the difference maker at Dromana Reserve last weekend. Voelkl’s knock helped Dromana chase down Frankston YCW’s total of 158 with an over left to play. Delacombe Park’s mammoth total of 224 proved enough to win on Saturday. They defeated Main Ridge by 20 runs. Ben Walker (73) and

Jonathan Guthrie (79no) were the top scorers.

A BRILLIANT man of the match showing from Paul Nelson was the highlight of Tyabb’s match with Balnarring last weekend. Tyabb chose to bat first and were impressive. Two batters scored half centuries: Nelson with 51 runs and opener Aidan Pateman with 54. Tyabb put 207 runs on the board. Balnarring’s run chase got off to a promising start. At 2/102 they looked right in the mix. Paul Nelson put a quick end to Balnarring’s chances. He managed to take a hat trick, tearing through the middle order in quick and convincing fashion. Nelson ended up taking 4/24. Tyabb won by 58 runs. Boneo and Mt Martha played out a thriller on Saturday afternoon. Boneo batted first. They scored 147, with opener Caolan O’Connor top scoring (49). Mt Martha kept touch with their target all innings long, but at 9/122 with not much cricket left to play looked in big trouble. Number 11 batter Steve O’Neill nearly saved the day with 17 not out off seven deliveries, but it wasn’t enough. Mt Martha lost by three runs. There was more close MPCA action on Saturday, with Pearcedale defeating Ballam Park in a nail-biter at McClelland College. Pearcedale cut it close, but ended up chasing 142 to win with just one wicket left to spare and one over left to play. Skye saw off a tough challenge from Rye. Skye emerged victorious by 11 runs. Seaford scored a big win on their home turf on Saturday, defeating Tootgarook by more than 100 runs.

By Ben Triandafillou Jamie Kah is back in the saddle and quickly claiming feature races again with a comfortable win in the Pakenham Cup (2500m) on Saturday. Last season’s champion rider had been off the scene since August

following her three-month ban for breaking COVID protocols but didn’t take long to return to doing what she does best – riding winners. Kah, who often rides trackwork at Mornington, made her race riding return at Mornington on the Friday before heading to The Valley that night. While a win evaded her at both tracks, she quickly bounced back to claim the $300,000 Pakenham Cup with a faultless ride aboard the race favourite Smokin’ Romans. Kah gleefully waved to the crowd as she eased the Ciaron Maher and David Eustace-trained stayer down for a comfortable two-length victory. “It’s great, terrific to be back, it’s amazing,” Kah said post-race. “I’ve missed it greatly. To come back and get a winner like that is very rewarding and I’m just happy to be back.” Kah shared the success with an elated crowd, taking celebratory photos with the Pakenham Cup in hand. The victory bumped her up to 20th in the Victorian metropolitan jockey’s premiership with five winners now to her name. Last season, she became the first person to ride more than 100 Melbourne winners in a single season.