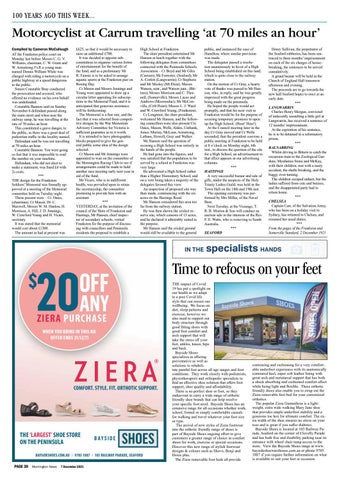 Motorcyclist at Carrum travelling ‘at 70 miles an hour’ Compiled by Cameron McCullough AT the Frankston police court on Monday last before Messrs C. G. V. Williams, chairman, C. W. Grant and W. Armstrong J’s.P, a young man named Dennis William White was charged with riding a motorcycle on a public highway at a speed dangerous to the public. Senior Constable Bray conducted the prosecution and accused, who offered no evidence on his own behalf was undefended. Constable Bannon said on Sunday November 6 defendant passed along the main street and when near the railway ramp, he was travelling at the rate of 70 miles an hour. This constituted a grave danger, to the public, as there was a great deal of pedestrian traffic in the locality named. Defendant said be was not travelling at 70 miles an hour. Constable Bannon: You were going so fast that it was impossible to read the number on your machine. Defendant, who did not elect to make a statement, was fined £4 with 2s costs. *** THE design for the Frankston Soldiers’ Memorial was formally approved at a meeting of the Memorial committee held on Tuesday night. Those present were – Cr. Oates, (chairman), Cr Mason, Dr. C. Maxwell, Messrs W. M. Hanlon, H. Morrison, A. Hill, J. D. Jennings, W. Crawford Young and H. Vicars, secretary. It was stated that the memorial would cost about £1300. The amount in had at present was

£625, so that it would be necessary to raise an additional £700. It was decided to appoint subcommittees to organise various forms of entertainment for the benefit of the fund, and as a preliminary Mr R. Fairnie is to be asked to arrange aquatic sports at the Frankston pier on Boxing Day. Cr Mason and Messrs Jennings and Young were appointed to draw up a circular letter appealing for subscriptions to the Memorial Fund, and it is anticipated that generous assistance will be forthcoming. The Memorial is a fine one, and the fact that it was selected from competitive designs by the War Memorials Advisory Committee for Victoria is sufficient guarantee as to it worth. It is intended to have photographic blocks prepared to give the general public some idea of the design selected. Cr Mason and Mr Jennings were appointed to wait on the committee of the Mornington Racing Club to see if arrangements could be made to hold another race meeting early next year in aid of the fund. Mr Vicars, who is in indifferent health, was prevailed upon to retain the secretaryship, the committee promising to provide him with an assistant. *** YESTERDAY, at the invitation of the council of the Shire of Frankston and Hastings, Mr Hansen, chief inspector of secondary schools, visited Frankston for the purpose of discussing with councillors and Peninsula residents the proposal to establish a

High School at Frankston. The shire president entertained Mr Hanson at lunch together with the following delegates from committees connected with the Peninsula Schools Association – Cr Boyd and Mr Giles (Carrum); Mr Forrester, (Seaford); Mr A. Corlett (Langwarrin); Cr Stephens and Mr Mosley (Mt Eliza); Messrs Watson, senr., and Watson junr., (Bittern); Messrs Morrison and C. Thornell, (Somerville); Messrs Lucas and Andrews (Moorooduc); Mr McConville, (Crib Point); Messrs L. J. Ward and W. Crawford Young, (Frankston). Cr Longmuir, the shire president, welcomed Mr Hansen, and the following councillors were also present Crs Oates, Mason, Wells, Alden, Unthank, Jones, Murray, McLean, Armstrong, Latham, Howell, Gray and Walker. Mr Hansen said the question of securing a High School was entirely in the hands of the people. He had gone into the figures, and was satisfied that the population to be served by a school at Frankston was very large. He advocated a High School rather than a Higher Elementary School, and on a vote being taken a majority of the delegates favored this view. An inspection of proposed site was then made, commencing with the six acres on the Hastings Road. Mr Hanson considered this area too far from the railway station. He was then shown the cricket reserve site, which consists of 13 acres, and he declared it admirably suited to the purpose. Mr Hansen said the cricket ground would still be available to the general

THE ‘LARGEST’ SHOE STORE ON THE PENINSULA

Henry Sullivan, the perpetrator of the Seaford robberies, has been sentenced to three months’ imprisonment on each of the six charges of housebreaking, the sentences to be served cumulatively. A grand bazaar will be held in the Church of England Hall tomorrow afternoon and evening. The proceeds are to go towards the new hall Seaford hopes to erect at an early date. *** LANGWARRIN Charles Henry Morgan, convicted of indecently assaulting a little girl at Langwarrin, has received a sentence of 12 months’ imprisonment. At the expiration of his sentence, he is to be detained in a reformatory prison. *** BALNARRING Whilst driving to Bittern to catch the excursion train to the Zoological Gardens, Mesdames Stone and McKay, with their children, met with a nasty accident, the shafts breaking, and the buggy over-turning. The children escaped unhurt, but the ladies suffered from cuts and bruises, and the disappointed party had to return home. *** CHELSEA Captain Carr, of the Salvation Army, who has been on a holiday visit to Sydney, has returned to Chelsea, and resumed her usual duties. *** From the pages of the Frankston and Somerville Standard, 2 December 1921

Time to refocus on your feet

public, and instanced the case of Hamilton, where similar provision was made. The delegates passed a resolution unanimously in favor of a High School being established on this land, which is quite close to the railway station. On the motion of Cr Gray, a hearty vote of thanks was passed to Mr Hanson, who, in reply, said he was greatly impressed with the great progress being made on the peninsula. He hoped the people would act promptly, and that his next visit to Frankston would be for the purpose of securing temporary premises to open up the High School. (Hear! Hear!) At the Council meeting later in the day Cr Gray moved and Cr Wells seconded, that the president convene a public meeting at Frankston to be held at 8 o’clock on Monday night, 6th inst., to discuss the question of the site for a High School, an advertisement to that effect appears in our advertising columns. *** HASTINGS A very successful bazaar and sale of gifts, under the auspices of the Holy Trinity Ladies Guild, was held in the Town Hall on the 18th and 19th inst. The opening ceremony was performed by Mrs Miller, of the Naval Base. Next Tuesday, at the Vicarage, T. R. B. Morton &amp; Son will conduct an auction sale in the interests of the Rev. F. E. Watts, who is removing to South Australia. *** SEAFORD

THE impact of Covid 19 has put a spotlight on our health as we adapt to a post Covid life style that can ensure our wellbeing. We focus on diet, sleep patterns and exercise, however we also need to support our body structure through good fitting shoes with good foot comfort and arch support that will take the stress off your feet, ankles, knees, hips and back. Bayside Shoes specializes in offering preventative as well as solutions to rehabilitate painful feet across all age ranges and foot conditions. They work closely with podiatrists, physiotherapists and orthopedic specialists to find an effective shoe solution that offers foot support, shoe quality and affordability. There is no perfect shoe or foot, so they endeavour to carry a wide range of orthotic friendly shoe brands that can help resolve your specific foot need. Bayside Shoes has an extensive range for all occasions whether work, school, formal or simply comfortable casuals for walking and travel whatever your foot size or type. The arrival of new styles of Ziera footwear into the orthotic friendly range of shoes is part of Bayside Shoes ongoing effort to give customers a greater range of choice in comfort shoes for work, exercise or special occasions. Discover this new range of stylish footwear designs &amp; colours such as Shovo, Benji and Doxie plus. The Ziera removable foot beds all provide

contouring and cushioning for a very comfortable underfoot experience with its anatomically contoured heel, super soft leather lining with great arch and metatarsal support that has both a shock absorbing and cushioned comfort effect while being light and flexible. These orthotic friendly shoes also enable you to swap out the Ziera removable foot bed for your customized orthotics. The popular Ziera Gummibear is a lightweight, extra wide walking Mary Jane shoe that provides ample underfoot stability and a generous toe box for ultimate comfort. The extra width of the shoe ensures no stress on your toes and is great if you suffer diabetes. Bayside Shoes is located at 103 Railway Parade, Seaford on the corner of Clovelly Parade and has both free and disability parking near its entrance with wheel chair ramp access to the store. View the Bayside Shoes range at www. baysideshoewarehouse.com.au or phone 9785 1887 if you require further information on what is available to suit your feet or occasion.