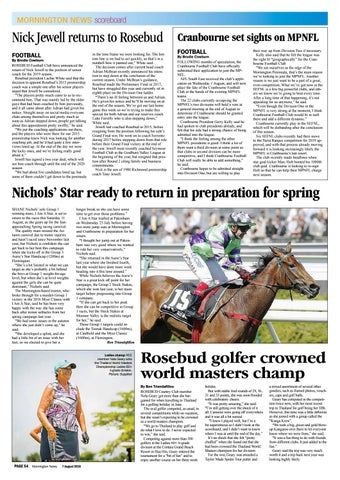 By Brodie Cowburn ROSEBUD Football Club have announced the return of Nick Jewell to the position of senior coach for the 2019 season. Rosebud president Lachie White said that the decision to appoint Rosebud’s 2015 premiership coach was a simple one after his senior players urged that Jewell be considered. “The players pretty much came to us to recommend him. That was mainly led by the older guys that had been coached by him previously, and it all came about after Adrian had given his notice. Straight away on social media everyone chats among themselves and pretty much as soon as Adrian stepped down, people got talking about this appointment pretty swiftly,” he said. “We put the coaching applications out there, and the players who were there for our 2015 premiership knew Nick was looking for another coaching job, and he’d had quite a few interviews lined up. At the end of the day we were the lucky ones, and we’re feeling really good about it.” Jewell has signed a two year deal, which will see him coach through until the end of the 2020 season. “We had about five candidates lined up, but some of them couldn’t get down to the peninsula

in the time frame we were looking for. The bottom line is we had to act quickly, so that’s in a nutshell how it panned out,” White said. The decision comes after current head coach Adrian McBean recently announced his intention to step down at the conclusion of the current season. Under McBean’s guidance, Rosebud made the Preliminary Final in 2017, but have struggled this year and currently sit in eighth place on the Division One ladder. “There’s no ill feeling between us and Adrian. He’s given his notice and he’ll be moving on at the end of the season. We’ve got our last home game this week so we’re trying to make this special for both Adrian and our reserves coach Luke Farrelly who is also stepping down,” White said. Jewell last coached Rosebud in 2015, before resigning from the position following his side’s Grand Final win. He went on to coach Sorrento during 2017 before stepping down from that role before their Grand Final victory at the end of the year. Jewell most recently coached Seymour Football Club in the Goulburn Valley League at the beginning of the year, but resigned that position after Round 2 citing family and business commitments. Nick is the son of 1980 Richmond premiership coach Tony Jewell.

By Brodie Cowburn FOLLOWING months of speculation, the Cranbourne Football Club have officially submitted their application to join the MPNFL. AFL South East received the club’s application on Wednesday 1 August, and will now place the fate of the Cranbourne Football Club in the hands of the existing MPNFL teams. The 22 clubs currently occupying the MPNFL’s two divisions will hold a vote at a general meeting at the end of August to determine if Cranbourne should be granted entry into the league. Cranbourne President Gerry Kelly said he had spoken to club presidents already, and felt that his side had a strong chance of being admitted into the league. “I think the feeling among the other MPNFL presidents is good. I think a lot of them want a third division at some point so that clubs in second division can be more competitive, and I think Cranbourne Football Club will really be able to add something,” he said. Cranbourne hopes to be admitted straight into Division One, but are willing to play

their way up from Division Two if necessary. Kelly also said that he felt the league was the right fit “geographically” for the Cranbourne Football Club. “We see ourselves as the edge of the Mornington Peninsula, that’s the main reason we’re looking to join the MPNFL. Another reason is we just want to be a part of a great, even competition. What we’ve got now in the SEFNL is a few big powerful clubs, and others we know we’re going to beat every time. After a long time of that happening, it’s not appealing for us anymore,” he said. “Even though the Division One in the MPNFL is very strong at the moment, I think Cranbourne Football Club would fit in well there and add a different dynamic.” Cranbourne currently play in the SEFNL, which will be disbanding after the conclusion of this season. Six SEFNL clubs recently had their move to the Yarra Ranges competition for 2019 approved, and with that process already moving forward it is looking increasingly likely the MPNFL is Cranbourne’s last resort. The club recently made headlines when star goal kicker Marc Holt booted his 1000th club goal. Cranbourne is looking to re-sign Holt so that he can help their MPNFL charge next season.

Nichols’ Star ready to return in preparation for spring SHANE Nichols’ sole Group 1 winning mare, I Am A Star, is set to return to the races this Saturday 11 August, as she gears up for the fastapproaching Spring racing carnival. The quality mare missed the Autumn carnival due to minor injuries and hasn’t raced since November last year, but Nichols is confident she can get back to her best this campaign when she kicks off in the Group 3 Aurie’s Star Handicap (1200m) at Flemington. “She’s a bit limited in what we can target as she’s probably a bit behind the boys at Group 1 weight-for-age level, but when she’s at level weights against the girls she can be quite dominant,” Nichols said. The Mornington-based trainer, who broke through for a maiden Group 1 victory in the 2016 Myer Classic with I Am A Star, said he has been very happy with the way she has come back after minor setbacks from her spring campaign last year. “We had some issues in the autumn where she just didn’t come up,” he said. “She developed a splint, and she had a little bit of an issue with her feet, so we elected to give her a

longer break so she can have some time to get over those problems.” I Am A Star trialled at Pakenham on Wednesday 25 July before having two more jump outs at Mornington and Cranbourne in preparation for her return. “I thought her jump out at Pakenham was very good where we wanted to ride her very conservatively,” Nichols said. “She returned in the Aurie’s Star last year where she finished fourth, but she would have done more work heading into it this time around.” While Nichols believes the Aurie’s Star is a great kick off point for her campaign, the Group 2 Stock Stakes, which she won last year, is her main target before progressing into Group 1 company. “If she can get back to her peak then she can be competitive in Group 1 races, but the Stock Stakes at Moonee Valley is the realistic target for her,” he said. Those Group 1 targets could include the Toorak Handicap (1600m), at Caulfield and the Myer Classic (1600m), at Flemington. Ben Triandafillou Ladies champ: RCC member Nola Geary wins the Thailand World Masters Championship Ladies 60+ A-grade division. Picture: Supplied

Rosebud golfer crowned world masters champ By Ben Triandafillou ROSEBUD Country Club member Nola Geary got more than she bargained for when travelling to Thailand for a golfing holiday in June. The avid golfer competed, as usual, in several competitions while on vacation, but she wasn’t expecting to be crowned as a world masters champion. “We go to Thailand to play golf and do what I love to do. I never expected to win,” she said. Competing against more than 500 golfers in the Ladies 60+ A-grade division at the Centara Grand Beach Resort in Hua Hin, Geary entered the tournament for a “bit of fun” and to enjoy another course on her three week

holiday. But with stable ford rounds of 29, 36, 31 and 33 points, she was soon flooded with celebratory cheers. “It was pretty amazing,” she said. “I’m still getting over the shock of it all. Cameras were going off everywhere and it was all a bit surreal. “I knew I played well, but I’m a bit superstitious so I didn’t look at the scoreboard, and I didn’t want to know where I was at until the end of the day.” It’s no shock that she felt “pretty chuffed” when she found out that she had been crowned the Thailand World Masters champion for her division. For the win, Geary was awarded a Taylor Made Spider Tour putter and

a mixed assortment of several other goodies, such as framed photos, vouchers, caps and golf balls. Geary has competed in the competition twice now, with her most recent trip to Thailand for golf being her fifth. However, this time was a little different as she joined with a group called the “Kanga Krew”. “We took a big, green and gold blowup Kangaroo over there to let everyone know where we were from,” she said. “It was a fun thing to do with friends from different clubs. It just added to the fun.” Geary said the trip was very much worth it and a trip back next year was looking highly likely.