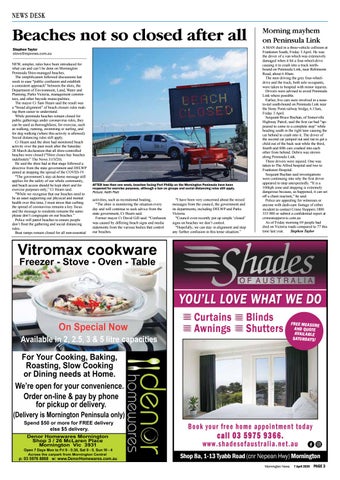 Beaches not so closed after all Stephen Taylor steve@mpnews.com.au NEW, simpler, rules have been introduced for what can and can’t be done on Mornington Peninsula Shire-managed beaches. The simplification followed discussions last week to ease “public confusion and establish a consistent approach” between the shire, the Department of Environment, Land, Water and Planning, Parks Victoria, management committees, and other bayside municipalities. The mayor Cr Sam Hearn said the result was a “broad alignment” of beach closure rules making them easier to understand. While peninsula beaches remain closed for public gatherings under coronavirus rules, they can be used as thoroughfares; for exercise, such as walking, running, swimming or surfing, and for dog walking (where this activity is allowed). Social distancing rules still apply. Cr Hearn said the shire had monitored beach activity over the past week after the Saturday 28 March declaration that all shire-controlled beaches were closed (“Shire closes bay beaches indefinitely” The News 31/3/20). He said the shire had at that stage followed a directive from the state government and DELWP aimed at stopping the spread of the COVID-19. “The government’s stay-at-home message still applies for the safety of our whole community, and beach access should be kept short and for exercise purposes only,” Cr Hearn said. “While we recognise that our beaches need to be an asset supporting our physical and mental health over this time, I must stress that curbing the spread of coronavirus remains a key focus and the message to residents remains the same: please don’t congregate on our beaches.” Police will patrol beaches to ensure people don’t flout the gathering and social distancing rules. Boat ramps remain closed for all non-essential

AFTER less than one week, beaches facing Port Phillip on the Mornington Peninsula have been reopened for exercise purposes, although a ban on groups and social distancing rules still apply. Picture: Keith Platt

activities, such as recreational boating. “The shire is monitoring the situation every day and will continue to seek advice from the state government, Cr Hearn said. Former mayor Cr David Gill said: “Confusion was caused by differing beach signs and media statements from the various bodies that control our beaches.

“I have been very concerned about the mixed messages from the council, the government and its departments, including DELWP and Parks Victoria. “Council even recently put up simple ‘closed’ signs on beaches we don’t control. “Hopefully, we can stay in alignment and stop any further confusion in this tense situation.”

Morning mayhem on Peninsula Link A MAN died in a three-vehicle collision at Frankston South, Friday 3 April. He was the driver of a van which was extensively damaged when it hit a four-wheel-drive causing it to crash into a truck northbound on Peninsula Link, near Robinsons Road, about 6.40am. The men driving the grey four-wheeldrive and the truck, both sole occupants, were taken to hospital with minor injuries. Drivers were advised to avoid Peninsula Link where possible. Earlier, five cars were involved in a noseto-tail south-bound on Peninsula Link near the Stony Point railway bridge, 6.15am, Friday 3 April. Sergeant Bruce Buchan, of Somerville Highway Patrol, said the first car had “appeared to come to a complete stop” while heading south in the right lane causing the car behind to crash into it. The driver of the second car jumped out and ran to get a child out of the back seat while the third, fourth and fifth cars crashed into each other from behind. Debris was strewn along Peninsula Link. Three drivers were injured. One was taken to The Alfred hospital and two to Frankston Hospital. Sergeant Buchan said investigations were continuing into why the first driver appeared to stop unexpectedly. “It is a 100kph zone and stopping is extremely dangerous because, as happened, it can set off a chain reaction,” he said. Police are appealing for witnesses or anyone with dash-cam footage of either incident to contact Crime Stoppers 1800 333 000 or submit a confidential report at crimestoppersvic.com.au As of Friday morning 69 people had died on Victoria roads compared to 77 this time last year. Stephen Taylor

YOU’LL LOVE WHAT WE DO On Special Now

For Your Cooking, Baking, Roasting, Slow Cooking or Dining needs at Home. We’re open for your convenience. Order on-line & pay by phone for pickup or delivery.

(Delivery is Mornington Peninsula only) Spend $$$ or more for FREE delivery else $$ delivery.