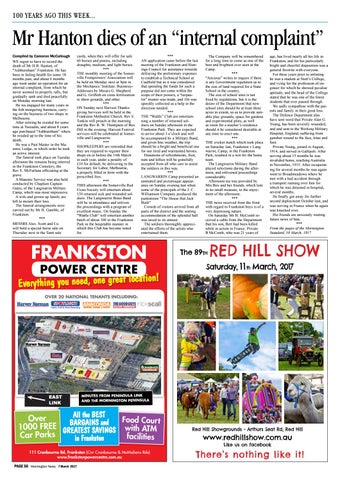 Mr Hanton dies of an “internal complaint” yards, when they will offer for sale 60 horses and ponies, including draughts, medium, and light horses. *** THE monthly meeting of the Somerville Fruitgrowers’ Association will be held on Monday next at 9pm in the Mechanics’ Institute. Business– Addresses by Messrs G. Shepherd and G. Griffeth on cross fertilization re show grounds, and other. *** ON Sunday next Harvest Thanksgiving Services will be held in the Frankston Methodist Church. Rev E. Tonkin will preach in the morning and the Rev R. W. Thompson of Box Hill in the evening. Harvest Festival services will be celebrated at Somerville and Langwarrin. *** SHOPKEEPERS are reminded that they are required to register their shops on or before the 14th March in each year, under a penalty of £10 for default, be delivering to the Secretary for Labor, Melbourne, a properly filled in form with the prescribed fees. *** THIS afternoon the Somerville Red Cross Society will entertain about 150 returned sick and wounded soldiers. The Langwarrin Brass Band will be in attendance and enliven the proceedings with a program of excellent music. On Sunday the “Wattle Club” will entertain another batch of about 100 in the Frankston Park in the hospitable manner in which this Club has become noted for.

Compiled by Cameron McCullough WE regret to have to record the death of Mr H B. Hanton, of “Ashburnham” Frankston. He has been in failing health for some 18 months past, and about 6 months ago went under an operation for an internal complaint, from which he never seemed to properly rally, but gradually sank and died peacefully on Monday morning last. He wa engaged for many years in the fish mongering business, carrying on the business of two shops in Melbourne. After retiring he resided for some time at Tooradin, and about 8 years ago purchased “Ashburnham” where he resided up to the time of his death. He was a Past Master in the Masonic Lodge, in which order he took an active interest. The funeral took place on Tuesday afternoon the remains being interred in the Frankston Cemetery, the Rev E. McFarlane officiating at the grave. A Masonic Service was also held conducted by Chaplain Captain Gates, of the Langwarrin Military Camp, which was most impressive. A wife and grown up family are left to mourn their loss. The funeral arrangements were carried out by Mr H. Gamble, of Frankston. *** MESSRS Alex. Scott and Co. will hold a special horse sale on Thursday next in the Tanti sale

*** AN application came before the last meeting of the Frankston and Hastings Council for assistance towards defraying the preliminary expenses to establish a Technical School at Caulfield but as it was considered that spending the funds for such a purpose did not come within the scope of their powers, a “tarpaulin” muster was made, and 10s was speedily collected as a help in the direction needed. *** THE “Wattle” Club are entertainning a number of returned soldiers on Sunday afternoon in the Frankston Park. They are expected to arrive about 3 o’clock and will be accompanied by a Military Band, and given fine weather, the trip should be a bright and beneficial one for our tired and warstained heroes. Donations of refreshments, fruit, nuts and lollies will be gratefully accepted from all who care to assist the soldiers in this way. *** LANGWARRIN Camp presented an animated and picturesque appearance on Sunday evening last when some of the principals of the J. C. Williamson Company produced the pantomime “The House that Jack Built” Crowds of visitors arrived from all parts of the district and the seating accommodation of the splendid hall was taxed to its utmost. The soldiers thoroughly appreciated the efforts of the artists who entertained them.

The Company will be remembered for a long time to come as one of the best and brightest ever seen at the Camp. *** “Anxious” writes to inquire if there is any Government regulation as to the size of land required for a State School in the country. The size of school sites is not fixed by regulations, but it is the desire of the Department that new school sites should be at least three acres in extent, so as to provide suitable play grounds, space for gardens and experimental plots, as well as room for a teacher’s residence should it be considered desirable at any time to erect one. *** THE cricket match which took place on Saturday last, Frankston v Lang warrin, Camp, in the Frankston Park, resulted in a win for the home team. The Langwarrin Military Band played selections during the afternoon, and enlivened proceedings considerably. Afternoon tea was provided by Mrs Box and her friends, which lent in no small measure, to the enjoyment of the afternoon. *** THE news received from the front with regard to Frankston boys is of a very depressing nature. On Saturday Mr H. McComb received a cable from the Department that his son, Bert had been killed while in action in France. Private B McComb, who was 21 years of

age, has lived nearly all his life in Frankston, and for his particularly bright and cheerful disposition was a general favorite with everyone. For three years prior to enlisting he was a student at Stott’s College, and vying for the profession of engineer for which he showed peculiar aptitude, and the head of the College stated that he was one of the finest students that ever passed through. We sadly sympathise with the parents and family in their great loss. The Defence Department also have sent word that Private Alan G. Young, has been severely wounded, and and sent to the Working Military Hospital, England, suffering from gunshot wound to the face, knee and foot. Private Young, joined in August, 1914, and served in Gallipoli. After serving about 15 months he was invalided home, reaching Australia in November, 1915. After recuperating for several months he was again went to Broadmeadows where he met with a bad accident through a transport running over him for which he was detained in hospital, several months. He finally got away for further second deployment October last, and was serving in France when he again was knocked over. His friends are anxiously waiting future news of him. *** From the pages of the Mornington Standard, 10 March, 1917

OVER 20 NATIONAL TENANTS INCLUDING: