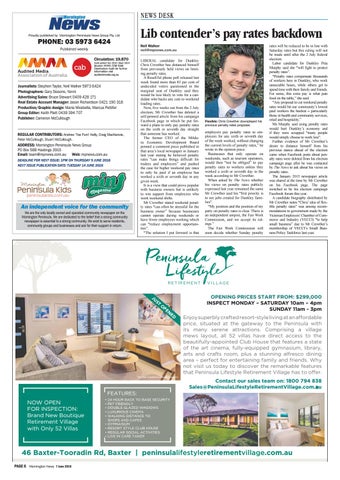 Lib contenderâ&#x20AC;&#x2122;s pay rates backdown Neil Walker neil@mpnews.com.au LIBERAL candidate for Dunkley Chris Crewther has distanced himself from previously held views on limiting penalty rates. A ReachTel phone poll released last week found more than 83 per cent of undecided voters questioned in the marginal seat of Dunkley said they would be less likely to vote for a candidate who backs any cuts to weekend loading rates. Now, five weeks out from the 2 July election, Mr Crewther has deleted a self-penned article from his campaign Facebook page in which he put forward a plans to only pay penalty rates on the sixth or seventh day straight that someone has worked. The former CEO of the Mildura Economic Development Board penned a comment piece published in that areaâ&#x20AC;&#x2122;s local newspaper in January last year stating he believed penalty rates â&#x20AC;&#x153;can make things difficult for traders and employersâ&#x20AC;? and pushed the case for higher weekend pay rates to only be paid if an employee has worked a sixth or seventh day in any given week. It is a view that could prove popular with business owners but is unlikely to win support from employees who work weekend shifts. Mr Crewther stated weekend penalty rates â&#x20AC;&#x153;can often be stressful for the business ownerâ&#x20AC;? because businesses cannot operate during weekends or have fewer employees working which can â&#x20AC;&#x153;reduce employment opportunitiesâ&#x20AC;?. â&#x20AC;&#x153;The solution I put forward is that

employers pay penalty rates to employees for any sixth or seventh day of the week worked, without changing the current levels of penalty rates,â&#x20AC;? he wrote in the opinion piece. Businesses that only operate on weekends, such as tourism operators, would then â&#x20AC;&#x153;not be obligedâ&#x20AC;? to pay penalty rates to workers unless they worked a sixth or seventh day in the week according to Mr Crewther. When asked by The News whether his views on penalty rates publicly expressed last year remained the same Mr Crewther said his â&#x20AC;&#x153;first priority is to see jobs created for Dunkley familiesâ&#x20AC;?. â&#x20AC;&#x153;My position and the position of my party on penalty rates is clear. There is an independent umpire, the Fair Work Commission, and we accept its rulings.â&#x20AC;? The Fair Work Commission will soon decide whether Sunday penalty

OPENING PRICES START FROM: $299,000 INSPECT MONDAY â&#x20AC;&#x201C; SATURDAY 10am â&#x20AC;&#x201C; 4pm SUNDAY 11am - 3pm Enjoy superbly crafted resort-style living at an affordable price, situated at the gateway to the Peninsula with its many serene attractions. Comprising a village mews layout, all 52 villas have direct access to the beautifully-appointed Club House that features a state of the art cinema, fully-equipped gymnasium, library, arts and crafts room, plus a stunning alfresco dining area â&#x20AC;&#x201C; perfect for entertaining family and friends. Why not visit us today to discover the remarkable features that Peninsula Lifestyle Retirement Village has to offer. Contact our sales team on: 1800 794 838 Sales@PeninsulaLifestyleRetirementVillage.com.u