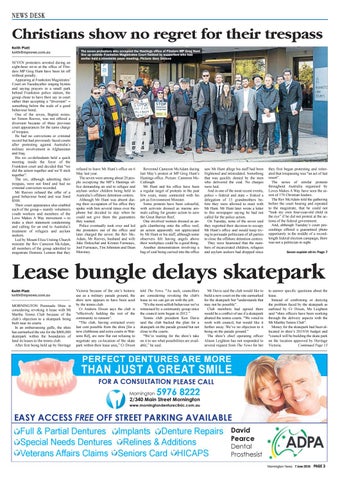 Christians show no regret for their trespass Keith Platt keith@mpnews.com.au SEVEN protesters arrested during an eight-hour sit-in at the office of Flinders MP Greg Hunt have been let off without penalty. Appearing at Frankston Magistrates’ Court on Tuesdayafter singing hymns and saying prayers in a small park behind Frankston police station, the group chose to have their say in court rather than accepting a “diversion” – something below the scale of a good behaviour bond. One of the seven, Baptist minister Simon Reeves, was not offered a diversion because of three previous court appearances for the same charge of trespass. He had no convictions or criminal record but had previously faced courts after protesting against Australia’s military involvement in Afghanistan and Iraq. His six co-defendants held a quick meeting inside the foyer of the Frankston court and decided that “we did the action together and we’ll stick together”. The six, although admitting their trespass, were not fined and had no criminal conviction recorded. Mr Reeves refused the offer of a good behaviour bond and was fined $500. Their court appearance also enabled each of the group – mainly volunteers youth workers and members of the Love Makes A Way movement – to make a short statement condemning and calling for an end to Australia’s treatment of refugees and asylum seekers. Led by Mount Eliza Uniting Church minister the Rev Cameron McAdam, all members of the group admitted to magistrate Dominic Lennon that they

The seven protesters who occupied the Hastings office of Flinders MP Greg Hunt line up outside Frankston Magistrates Court flanked by supporters who had earlier held a streetside payer meeting. Picture: Gary Sissons

refused to leave Mr Hunt’s office on 6 May last year. The seven were among about 20 people occupying the MP’s Hastings office demanding an end to refugee and asylum seeker children being held in Australia’s offshore detention centres. Although Mr Hunt was absent during their occupation of his office they spoke with him several times over the phone but decided to stay when he could not give them the guarantees they wanted. Police eventually took over and led the protesters out of the office and later charged the seven: the Rev McAdam, Mr Reeves, husband and wife Jake Doleschal and Kristen Furneaux, Joel Furneaux, Tim Johnston and Dean Moroney.

Reverend Cameron McAdam during last May’s protest at MP Greg Hunt’s Hastings office. Picture: Cameron McCullough Mr Hunt and his office have been a regular target of protests in the past few years, many connected with his job as Environment Minister. Some protests have been colourful, with activists dressed as marine animals calling for greater action to save the Great Barrier Reef. One involved women dressed as angels clambering onto the office roof, an action apparently not appreciated by Mr Hunt or his staff, although some observers felt having angels above their workplace could be a good thing. Another demonstration involving a bag of coal being carried into the office

saw Mr Hunt allege his staff had been frightened and intimidated. Something that was quickly denied by the men who delivered the coal. No charges were laid. And in one of the most recent events, police – federal and state – frisked a delegation of 15 grandmothers before they were allowed to meet with Mr Hunt. Mr Hunt later wrote a letter to this newspaper saying he had not called for the police action. On Tuesday, none of the seven said they regretted their decision to occupy Mr Hunt’s office and would keep trying to persuade politicians of all parties to close the offshore detention centres. They were heartened that the numbers of incarcerated children, refugees and asylum seekers had dropped since

they first began protesting and reiterated that trespassing was “an act of last resort”. The series of similar protests throughout Australia organised by Loves Makes A Way have seen the arrest of 174 Christian leaders. The Rev McAdam told the gathering before the court hearing and repeated to the magistrate, that he could not “look my own four-year-old child in the eye” if he did not protest at the actions of the federal government. And, although Tuesday’s court proceedings offered a guaranteed photo opportunity in the middle of a recordlength federal election campaign, there was not a politician in sight. Seven explain sit-in: Page 7

Lease bungle delays skatepark Keith Platt keith@mpnews.com.au MORNINGTON Peninsula Shire is considering revoking it lease with Mt Martha Tennis Club because of the club’s objection to a skatepark being built near its courts. In an embarrassing gaffe, the shire has earmarked the site for the $800,000 skatepark within the boundaries of land its leases to the tennis club. After first being held up by Heritage

Victoria because of the site’s historic use as a military parade ground, the shire now appears to have been aced by the tennis club. Cr Andrew Dixon says the club is “effectively holding the rest of the community to ransom”. “The club, having extracted every last cent possible from the shire [for a new clubhouse and extra courts in Watsons Rd], are now flat out refusing to negotiate any co-location of the skate park within their lease area,” Cr Dixon

told The News. “As such, councillors are considering revoking the club's lease so we can get on with the job. “It's the most selfish behaviour we've witnessed by a community group since the council term began in 2012.” Tennis club president Ken Davis said the club backed the plan for a skatepark on the parade ground but not close to the courts. “We’re waiting for the shire’s take on it to see what possibilities are available,” he said.

Mr Davis said the club would like to build a new court on the site earmarked for the skatepark but “understands that may not be possible”. Club members had agreed there would be a conflict of use if a skatepark abutted the tennis courts. “We voted to work with council, but would like it further away. We’ve no objection to it being on the parade ground.” The shire’s chief operating officer Alison Leighton has not responded to several request from The News for her

to answer specific questions about the lease. Instead of confirming or denying the problem faced by the skatepark as outlined by Cr Dixon, Ms Leighton said “shire officers have been working through the delivery aspects with the Mt Martha Tennis Club”. Money for the skatepark had been allocated in shire’s 2015/16 budget and “council will be building the skate park on the location approved by Heritage Victoria. Continued Page 13

THAN JUST A GREAT SMILE FOR A CONSULTATION PLEASE CALL Mornington