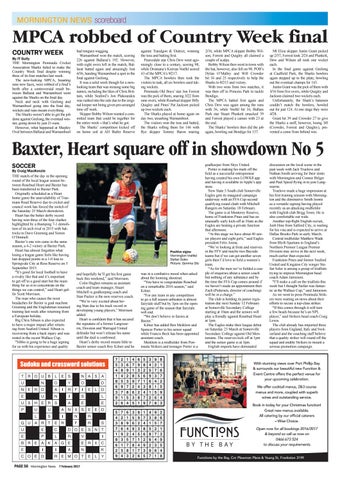 MPCA robbed of Country Week final COUNTRY WEEK By IT Gully THE Mornington Peninsula Cricket Association Sharks failed to make the Country Week final despite winning three of its four matches last week. The new-looking MPCA, boasting nine new faces, were robbed of a final’s berth after a controversial result between Ballarat and Warnambool went against the Sharks on the final day. Neck and neck with Geelong and Warnambool going into the final day, wickets and runs meant everything. The Sharks weren’t able to get the job done against Geelong, the eventual winner, going down by just 21-runs. However, what happened at Shepley Oval between Ballarat and Warnambool

had tongues wagging. Warnambool won the match, scoring 226 against Ballarat’s 192. However, with eight overs left in the match, Ballarat batted again and amazingly lost 6/36, handing Warnambool a spot in the final against Geelong. It was a solid week though for a newlooking team that was missing some big names, including the likes of Chris Brittain, while Seaford’s Jon Plakourakis was rushed into the side due to the original keeper not being given pre-arranged time off work. Skipper Bobby Wilson wanted a committed team that could be together for the entire week – that’s what he got. The Sharks’ competition kicked off on home soil at AH Butler Reserve

against Traralgon & District, winning the toss and batting first. Pearcedale star Chris Dew went agonisingly close to a century, scoring 98, while Dromana’s Kierran Voelkl scored 43 of the MPCA’s 9/217. The MPCA bowlers then took the visitors to task, all six bowlers used taking wickets. Peninsula Old Boys’ star Jon Forrest was the pick of them, snaring 3/22 from nine overs, while Rosebud skipper Billy Quigley and Pines’ Pat Jackson picked up two wickets each. The Sharks played at home again on day two, smashing Warnambool. The visitors won the toss and batted, the Sharks rolling them for 146 with Rye skipper Tommy Baron snaring

2/16, while MPCA skipper Bobby Wilson, Forrest and Quigley all claimed a couple of scalps. Bobby Wilson then went to town with the bat, however, also fell on 98. POB’s Dylan O’Malley and Will Crowder hit 34 and 25 respectively to help the Sharks to 8/215 and victory. With two wins from two matches, it was then off to Princess Park to tackle Bendigo. The MPCA batted first again and Chris Dew was again among the runs with 56, while Voelkl hit 34, Ballam Park star Stuart Plunkett smacked 39 and Forrest played a cameo with 23 at the end. The Sharks’ bowlers then did the job again, bowling out Bendigo for 157.

Mt Eliza skipper Justin Grant picked up 2/37, Forrest took 2/24 and Plunkett, Dew and Wilson all took one wicket each. In the final game against Geelong at Caulfield Park, the Sharks bowlers again stepped up to the plate, bowling out the eventual champs for 145. Justin Grant was the pick of them with 3/16 from five overs, while Quigley and Jackson claimed two wickets each. Unfortunately, the Shark’s batsmen couldn’t match the bowlers, bowled out for just 124. At one stage they were 4/28. Grant hit 39 and Crowder 27 to give the Sharks a sniff, however, losing 3/0 (Crowder, Forrest and Quigley), prevented a come from behind win.

Baxter, Heart square off in showdown No 5 SOCCER

By Craig MacKenzie THE match of the day in the opening round of the local league season between Rosebud Heart and Baxter has been transferred to Baxter Park. Originally scheduled as a Heart home game the unavailability of Truemans Road Reserve due to cricket and council work has forced the switch of the Saturday 25 March showdown. Heart has the better derby record having won three of the four clashes highlighted by a thumping 7-1 demolition of its arch rival in 2015 with hattricks to Dave Greening and Simon O’Donnell. Baxter’s one win came in the same season, a 4-2 victory at Baxter Park. Heart has almost forgotten what losing a league game feels like having last dropped points in a 1-0 loss to Springvale City at Ross Reserve on 5 September 2015. “It’s good for local football to have a rivalry like that and it’s important to get off to a good start but the main thing for us is to concentrate on the things we can control,” said Heart gaffer Scott Morrison. The man who causes the most headaches for Baxter is goal machine Greening and the Englishman resumed training last week after returning from a European holiday. Big Chris Sibson is also expected to have a major impact after returning from Seaford United. Sibson is recovering from a back injury and was rested in the recent Wallace Cup. “Sibbo is going to be a huge signing for us with his experience and quality

and hopefully he’ll get his first game back this weekend,” said Morrison. Colin Hughes remains as assistant coach and team manager, Stuart Mitchell is goalkeeping coach and Stan Packer is the new reserves coach. “We’re very excited about hiring Stan due to his track record in developing young players,” Morrison added. Heart is confident that it has secured the signature of a former Langwarrin, Doveton and Warragul United defender but won’t release his name until the deal is confirmed. Heart’s derby record means little to Baxter senior coach Roy Kilner and he

was in a combative mood when asked about the looming shootout. “You have to congratulate Rosebud on a remarkable 2016 season,” said Kilner. “For any team in any competition to go a full season unbeaten is almost fairytale stuff but by 5pm on the opening game of the season that fairytale will end. “We don’t believe in fairies at Baxter.” Kilner has added Ben Meiklem and Spencer Porter to his senior squad while Francis Beck has been appointed assistant coach. Meiklem is a midfielder from Peninsula Strikers and teenager Porter is a

goalkeeper from Skye United. Porter is making his mark off the field as a successful entrepreneur having created his own LOWK8 app and having it available in Apple’s app store. New State 5 South club Somerville Eagles gets its inaugural campaign underway with an FFA Cup second qualifying round clash with Mitchell Rangers on Saturday 18 February. The game is at Monterey Reserve, home of Frankston Pines and has an unusually early kick-off at 10am as the Eagles are hosting a private function that afternoon. “At this stage we have about 40 senior players and eight girls,” said Eagles president Felix Arena. “We’re looking at firsts and reserves in the FFV and maybe two Bayside teams but if we can get another seven girls then I’d love to field a women’s team. “As for the men we’ve fielded a couple of enquiries about a senior coach but nothing of any substance and by the time the FFA Cup comes around if we haven’t made an appointment then Zach (Pedersen, director of coaching) will be in a charge.” The club is holding its junior registration day next Sunday 12 February at Somerville Secondary College starting at 10am and the seniors will play a friendly against Rosebud Heart at 1pm. The Eagles make their league debut on Saturday 25 March at Somerville Secondary College against Old Mentonians. The reserves kick off at 1pm and the senior game is at 3pm. English imports have dominated

discussion on the local scene in the past week with Jack Truelove and Nathan Smith arriving for their stints with Mornington and Connor Belger and Paul Speed flying in to join Langwarrin. Truelove made a huge impression at his first training session with Mornington and the diminutive Smith looms as a versatile signing having played recently as an attacking midfielder with English club Brigg Town. He is also comfortable out wide. Another top-flight English recruit, Josh Hine from Salford City, is waiting for his visa and is expected to arrive at Dallas Brooks Park in early March. Central midfielder Matthew Wade from Blyth Spartans in England’s Northern Premier League Premier Division may arrive in the next week, much earlier than expected. Frankston Pines and former Seaford United and Kingston City winger Stefan Soler is among a group of triallists trying to impress Mornington head coach Adam Jamieson. “I’ll make a call on the triallists this week but I thought Stefan was fantastic at the Wallace Cup,” said Jamieson. As we went to press Peninsula Strikers were waiting on news about their efforts to secure a top-class striker. “If this comes through it will turn a few heads because he’s an NPL player,” said Strikers head coach Craig Lewis. The club already has imported three players from England, Italy and Switzerland and the coaching staff believe that a quality striker will round off the squad and enable Strikers to mount a serious promotion campaign.

With stunning views over Port Phillip Bay & surrounds our beautiful new Function & Event Centre offers the perfect venue for your upcoming celebration. We offer cocktail menus, 2&3 course menus and more, coupled with superb wines and outstanding service. Book in today for your Christmas function! Great new menus available. čV>ÌiÀ}LÞÕÀvwV>V>ÌiÀiÀÃ – Wise Choice. Open now for all bookings 2016/2017 & beyond so call us now on 0466 673 524 to discuss your requirements. Functions by the Bay, Cnr Plowman Place & Young St, Frankston 3199