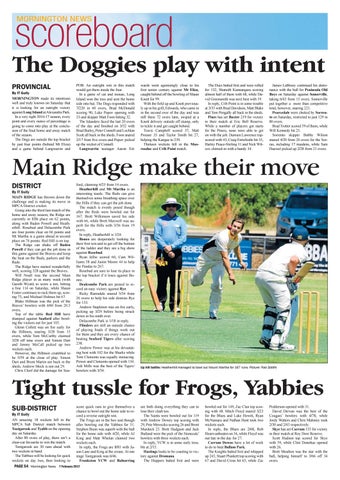 The Doggies play with intent PROVINCIAL By IT Gully MORNINGTON made its intentions well and truly known on Saturday that it is looking for an outright victory against Long Island at Alexandra Park. In a very tight 2016-17 season, every point and every ounce of percentage is going to come into play at the conclusion of the final home and away match of the season. The Dogs are outside the top bracket by just four points (behind Mt Eliza) and a game behind Langwarrin and

POB. An outright win in this match would get them inside the four. In a game of cat and mouse, Long Island won the toss and sent the home side into bat. The Dogs responded with 7/220 in 60 overs, Brad McDonald scoring 90, Luke Popov opening with 33 and skipper Matt Foon hitting 32. The Islanders faced the last 20 overs of the day and finished on 3/52 with Brad Bailey, Peter Connell and Lochlan Scott all back in the sheds. Foon snared 2/17 from five overs and Popov picked up the wicket of Connell. Langwarrin teenager Aaron Ed-

wards went agonisingly close to his first senior century against Mt Eliza, caught behind off the bowling of Shaun Knott for 99. With the field up and Knott previously up in his grill, Edwards, who came in in the second over of the day and was still there 72 overs later, swiped at a Knott delivery outside off stump, only to tickle it and get caught behind. Travis Campbell scored 37, Matt Prosser 33 and Taylor Smith hit 27, helping the Kangas to 239. Thirteen wickets fell in the Moorooduc and Crib Point match.

The Ducs batted first and were rolled for 132, Shamith Kannangara scoring almost half of them with 68, while David Greensmith was next best with 19. In reply, Crib Point is in some trouble at 3/35 with Brad Davidson, Matt Blake and Tom Pengally all back in the sheds. Pines has set Baxter 219 for victory in their match at Eric Bell Reserve. While a number of players got starts for the Piners, none were able to get on with the job. Damien Lawrence topscored with 43, Craig Entwhistle hit 33, Harley Peace-Stirling 31 and Nick Wilcox chimed-in with a handy 34.

James LaBrooy continued his dominance with the ball for Peninsula Old Boys on Saturday against Somerville, taking 6/43 from 15 overs. Somerville put together a more than competitive total, however, snaring 221. Pearcedale were choked by Sorrento on Saturday, restricted to just 129 in 80 overs. Brad Trotter scored 59 of them, while Will Kennedy hit 25. Sorrento skipper Bobby Wilson snared 4/20 from 26 overs for the Sorras, including 17 maidens, while Sam Duewel picked up 2/28 from 21 overs.

Main Ridge make their move DISTRICT By IT Gully MAIN RIDGE has thrown down the challenge and is making its move in MPCA District cricket. Going into the third last match of the home and away season, the Ridge are currently in fifth place on 62 points, along with Baden Powell and Heatherhill. Rosebud and Delacombe Park are four points clear on 66 points and Mt Martha is a game ahead in second place on 74 points. Red Hill is on top. The Ridge can shake off Baden Powell if they can get the job done in this game against the Braves and keep the heat on the Buds, parkers and the Reds. The Ridge have started wonderfully well, scoring 328 against the Braves. Will Noall was the second Main Ridge player in as many week (with Gareth Wyatt) to score a ton, hitting a fine 114 on Saturday, while Shaun Foster continues to rack them up, scoring 73, and Michael Holmes hit 67. Blake Hillman was the pick of the Braves’ bowlers with 4/60 from 20.5 overs. Top of the table Red Hill have slumped against Seaford after bowling the visitors out for just 105. Glenn Collett was on fire early for the Hillmen, snaring 3/28 from 15 overs, while Tom McCarthy claimed 3/28 off nine overs and Simon Dart and Jimmy McCall picked up two wickets each. However, the Hillmen crumbled to be 5/59 at the close of play. Simon Dart and Brent Martin are back in the sheds. Andrew Mock is not out 29. Chris Cleef did the damage for Sea-

ford, claiming 4/25 from 14 overs. Heatherhill and Mt Martha is an interesting tussle. The Reds can give themselves some breathing space over the Hills if they can get the job done. The match is evenly posed though after the Reds were bowled out for 167. Brett Wilkinson saved his side with 66, while Brett Maxwell was superb for the Hills with 5/36 from 19 overs. In reply, Heatherhill is 1/24. Boneo are desperately looking for their first win and to get off the bottom of the ladder and they are a big show against Rosebud. Ryan Jellie scored 60, Cam Williams 58 and Justin Moore 44 to help the Pandas to 267. Rosebud are sure to lose its place in the top bracket if it loses against Boneo. Dealcombe Park are poised to record an easy victory against Rye. Ricky Ramsdale snared 5/34 from 26 overs to help his side dismiss Rye for 133. Andrew Stapleton was on fire early, picking up 3/29 before being struck down in his ninth over. Delacombe Park is 1/18 in reply. Flinders are still an outside chance of playing finals if things work out for them and they are every chance of beating Seaford Tigers after scoring 238. Andrew Power was at his devastating best with 102 for the Sharks while Tom Clements was equally menacing. Power and Clements opened with 134. Ash Mills was the best of the Tigers’ bowlers with 3/34.

Tight tussle for Frogs, Yabbies SUB-DISTRICT By IT Gully AN amazing 18 wickets fell in the MPCA Sub District match between Tootgarook and Tyabb on the opening day on Saturday. After 80 overs of play, there isn’t a clear-cut favourite to win the match. Tootgarook are 30 runs ahead with two wickets in hand. The Yabbies will be looking for quick wickets on day two, then looking to

score quick runs to give themselves a chance to bowl out the home side to record a reverse outright win. The Frogs are in the box seat though after bowling out the Yabbies for 51. Stephen Brain was superb with the ball for the home side with 4/20, while AJ King and Matt Whelan claimed two wickets each. In reply, the Frogs are 8/81 with Jason Lane and King at the crease. At one stage Tootgarook was 6/46. Frankston YCW and Balnarring

are both doing everything they can to lose their clash too. The Saints were bowled out for 119 with Andrew Dowey top scoring with 29, Pete Mereszko scoring 26 and Brent Murdock 25. Brett Hudgson and Jack Butland were the pick of the Stonecats’ bowlers with three wickets each. In reply, YCW is in some early trouble at 2/15. Hastings looks to be coasting to victory against Dromana. The Hoppers batted first and were

bowled out for 149, Zac Clan top scoring with 48. Mitch Floyd snared 3/23 for the Blues and Luke Hewitt, Ryan McNamara and Nathan Hunt took two wickets each. In reply, the Blues are 2/68, Rob Hearn unbeaten on 34, while Floyd was out late in the day for 27. Carrum Downs have a lot of work to do to beat Ballam Park. The Knights batted first and whipped up 245, Stuart Plunkett top scoring with 67 and David Cross hit 65, while Zac

Pedderson opened with 31. David Dervan was the best of the Cougars’ bowlers with 4/78, while Jordy Watters and Chris Maloney took 2/30 and 2/45 respectively. Skye has set Carrum 155 for victory in their match at Roy Dore Reserve. Scott Hudson top scored for Skye with 59, while Clint Donohue opened with 26. Brett Moulton was the star with the ball, helping himself to 5/66 off 34 overs.