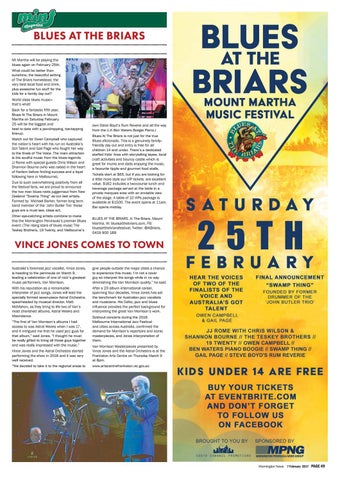 BLUES AT THE BRIARS Mt Martha will be playing the blues again on February 25th. What could be better than sunshine, the beautiful setting of The Briars homestead, the very best local food and drink, plus awesome fun stuff for the kids for a family day out? World class blues music– that’s what! Back for a fantastic fifth year, Blues At The Briars in Mount Martha on Saturday February 25 will be the biggest and best to date with a jaw-dropping, toe-tapping line-up. Watch out for Owen Campbell who captured the nation’s heart with his run on Australia’s Got Talent and Gail Page who fought her way to the finals of The Voice. The main attraction is the soulful music from the blues legends JJ Rome with special guests Chris Wilson and Shannon Bourne (who was raised in the heart of Harlem before finding success and a loyal following here in Melbourne). Due to such overwhelming positivity from all the festival fans, we are proud to announce the two man blues roots juggernaut from New Zealand “Swamp Thing” as our last artists. Formed by Michael Barker, former long term band member of the ‘John Butler Trio’ these guys are a must see, class act. Other eye-catching artists combine to make this the Mornington Peninsula’s premier Blues event. (The rising stars of blues music The Teskey Brothers, 19 Twenty, and Melbourne’s

own Steve Boyd’s Rum Reverie and all the way from the U.K Ben Waters Boogie Piano.) Blues At The Briars is not just for the true Blues aficionado. This is a genuinely familyfriendly day out and entry is free for all children 14 and under. There’s a dedicated staffed Kids’ Area with storytelling tepee, local craft activities and bouncy castle which is great for mums and dads enjoying the music, a favourite tipple and gourmet food stalls. Tickets start at $65, but if you are looking for a little more style our VIP tickets are excellent value. $162 includes a two-course lunch and beverage package served at the table in a private marquee area with an enviable view of the stage. A table of 10 VIPs package is available at $1500. The event opens at 11am. Bar opens midday. BLUES AT THE BRIARS. A: The Briars, Mount Martha, W: bluesatthebriars.com, FB: bluesatthebriarsfestival, Twitter: @AtBriars, 0419 900 189

VINCE JONES COMES TO TOWN Australia’s foremost jazz vocalist, Vince Jones, is heading to the peninsula on March 9, leading a celebration of one of rock’s greatest music performers, Van Morrison.

give people outside the major cities a chance to experience this music. I’m not a cover guy so interpret the songs while in no way diminishing the Van Morrison quality,” he said.

With his reputation as a remarkable interpreter of jazz songs, Jones will lead the specially formed seven-piece Astral Orchestra, spearheaded by musical director, Matt McMahon, as they bring to life two of Van’s most cherished albums, Astral Weeks and Moondance.

“The first of Van Morrison’s albums I had access to was Astral Weeks when I was 17, and it intrigued me that he used jazz guys for that album,” said Jones. “I thought he must be really gifted to bring all those guys together and was really impressed with the music.”

Sold-out concerts during the 2016 Melbourne International Jazz Festival and cities across Australia, confirmed the demand for Morrison’s repertoire and iconic masterpieces, and Jones interpretation of them.

Vince Jones and the Astral Orchestra started performing the show in 2016 and it was very well received.

Van Morrison Masterpieces presented by Vince Jones and the Astral Orchestra is at the Frankston Arts Centre on Thursday March 9 at 8pm.

“We decided to take it to the regional areas to