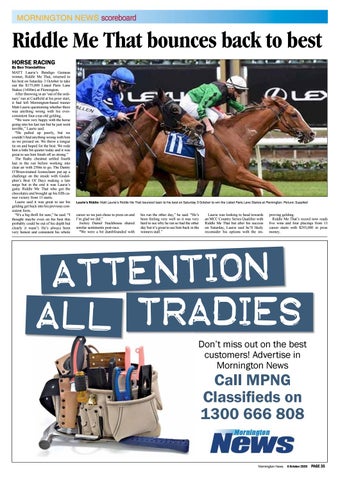 Riddle Me That bounces back to best HORSE RACING

By Ben Triandafillou MATT Laurie’s Bendigo Guineas winner, Riddle Me That, returned to his best on Saturday 3 October to take out the $175,000 Listed Paris Lane Stakes (1400m) at Flemington. After throwing in an ‘out of the ordinary’ run at Caulfield at his prior start, it had left Mornington-based trainer Matt Laurie questioning whether there was anything wrong with his everconsistent four-year-old gelding. “We were very happy with the horse going into his last run but he just went terrible,” Laurie said. “He pulled up poorly, but we couldn’t find anything wrong with him so we pressed on. We threw a tongue tie on and hoped for the best. We rode him a little bit quieter today and it was great to see him finish off so strong.” The flashy chestnut settled fourth last in the run before working into clear air with 250m to go. The Danny O’Brien-trained Iconoclasm put up a challenge on the inside with Godolphin’s Best Of Days making a late surge but in the end it was Laurie’s gutsy Riddle Me That who got the chocolates and brought up his fifth career victory from 13 starts. Laurie said it was great to see his gelding get back into his previous consistent form. “It&#39;s a big thrill for sure,” he said. “I thought maybe even on his best this probably could be out of his depth but clearly it wasn’t. He’s always been very honest and consistent his whole

Laurie’s Riddle: Matt Laurie’s Riddle Me That bounced back to his best on Saturday 3 October to win the Listed Paris Lane Stakes at Flemington. Picture: Supplied

career so we just chose to press on and I’m glad we did.” Jockey Daniel Stackhouse shared similar sentiments post-race. “We were a bit dumbfounded with

his run the other day,” he said. “He’s been feeling very well so it was very hard to see why he ran so bad the other day but it’s great to see him back in the winners stall.”

Laurie was looking to head towards an MCC Country Series Qualifier with Riddle Me That but after his success on Saturday, Laurie said he’ll likely reconsider his options with the im-