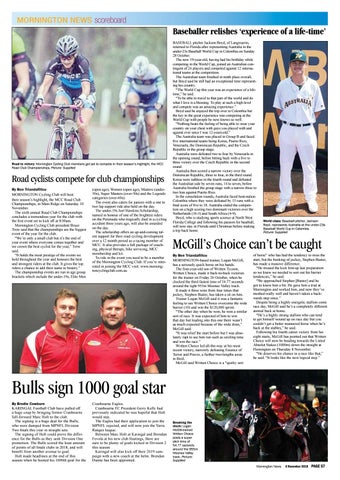 Baseballer relishes ‘experience of a life-time’

Road cyclists compete for club championships By Ben Triandafillou MORNINGTON Cycling Club will host their season’s highlight, the MCC Road Club Championships, in Main Ridge on Saturday 10 November. The sixth annual Road Club Championships concludes a tremendous year for the club with the first event set to kick off at 8:00am. Mornington Cycling Club president Bruce Trew said that the championships are the biggest event of the year for the club. “We’re only a small club but it’s the end of year event where everyone comes together and we crown the best cyclist for the year,” Trew said. “It holds the most prestige of the events we hold throughout the year and honours the best and strongest riders at the club. It gives the top riders a chance to add their name to history.” The championship events are run in age group brackets which include the under-19s, Elite Men

(open age), Women (open age), Masters (under50s), Super Masters (over-50s) and the Legends categories (over-60s). The event also caters for juniors with a one to two lap support ride also held on the day. The under-19s Joel Hawkins Scholarship, named in honour of one of the brightest riders on the Peninsula who tragically died in a cycling accident three years ago, will also be awarded on the day. The scholarship offers an up-and-coming talent support for their road cycling development over a 12 month period as a racing member of MCC. It also provides a full package of coaching, physical therapy, bike servicing, MCC membership and kit. To ride in the event you need to be a member of the Mornington Cycling Club. If you’re interested in joining the MCC visit: www.morningtoncyclingclub.com.au

BASEBALL pitcher Jackson Boyd, of Langwarrin, returned to Florida after representing Australia in the under-23s Baseball World Cup in Colombia on Sunday 28 October. The now 19-year-old, having had his birthday while competing in the World Cup, joined an Australian contingent of 24 players and competed against 12 international teams at the competition. The Australian team finished in ninth place overall, but Boyd said he still had an exceptional time representing his country. “The World Cup this year was an experience of a lifetime,” he said. “To be able to travel to that part of the world and do what I love is a blessing. To play at such a high level and compete was an amazing experience.” Boyd said he enjoyed the trip over to Colombia but the key to the great experience was competing at the World Cup with people he now knows so well. “Nothing beats the feeling of being able to wear your country on your chest with guys you played with and against ever since I was 12-years-old.” The Australia team was placed in Group B and faced five international teams being Korea, Puerto Rico, Venezuela, the Dominican Republic, and the Czech Republic in the group stage. Australia were defeated two to four by Venezuela in the opening round, before hitting back with a five to three victory over the Czech Republic in the second round. Australia then scored a narrow victory over the Dominican Republic, three to four, in the third round. Korea were ruthless in the fourth round and defeated the Australian side by seven runs, 14 to seven, before Australia finished the group stage with a narrow three to two loss against Puerto Rico. In the consolation rounds, Australia faced host-nation Colombia where they were defeated by 13 runs with a final score of five to 18. Australia ended the competition on a high scoring two dominant victories over the Netherlands (16-3) and South Africa (4-9). Boyd, who is studying sports science at North West Florida College and following his passion for baseball, will now stay in Florida until Christmas before making a trip back home.

McGill’s Choice can’t be caught By Ben Triandafillou MORNINGTON-based trainer, Logan McGill, has a seriously quick horse on his hands. The four-year-old son of Written Tycoon, Written Choice, made it back-to-back victories for the trainer on Friday 26 October, when he clocked the third fastest time of 54.77 seconds around the tight 955m Moonee Valley track. It made it three wins from four times that jockey, Stephen Baster, has taken a sit on him. Trainer Logan McGill said it was a fantastic feeling to see Written Choice overcome the wide barrier (10) and win the $120,000 sprint. “The other day when he won, he won a similar sort of race. It was expected of him to win that day but leading into this one there wasn’t as much expected because of the wide draw,” McGill said. “It was relief the start before but I was absolutely rapt to see him run such as sizzling time and win the race.” Written Choice led all-the-way at his most recent victory, narrowly defeating Essence of Terror and Pravro, a further two-lengths away in third. McGill said Written Choice is a “quirky sort

of horse” who has had the tendency to miss the start, but the booking of jockey, Stephen Baster, has made a massive difference. “He missed the kick first-up last preparation so we knew we needed to sort out his barrier tendencies,” he said. “We approached Stephen [Baster] and he got to know him a bit. He gave him a trial at Mornington and worked him, and now they’ve meshed really well and haven’t taken a backwards step since.” Despite being a highly energetic stallion come race day, McGill said he’s a completely different animal back at home. “He’s a highly strung stallion who can tend to get himself wound up on race day but you couldn’t get a better mannered horse when he’s back at the stables,” he said. Following his fourth career victory from his eight starts, McGill has pointed out that Written Choice will now be heading towards the Listed Absolut Stakes (1000m) down the straight at Flemington on Thursday 8 November. “He deserves his chance in a race like that,” he said. “It looks like the next logical step.”

Bulls sign 1000 goal star By Brodie Cowburn KARINGAL Football Club have pulled off a huge coup by bringing former Cranbourne full-forward Marc Holt to the club. The signing is a huge deal for the Bulls, who were dumped from MPNFL Division Two finals this year in straight sets. The signing of Holt could prove the difference for the Bulls as they seek Division One promotion. The Bulls scored the least amount of points of all finals clubs in 2018, and will benefit from another avenue to goal. Holt made headlines at the end of this season when he booted his 1000th goal for the

Cranbourne Eagles. Cranbourne FC President Gerry Kelly had previously indicated he was hopeful that Holt would stay. The Eagles had their application to join the MPNFL rejected, and will now join the Yarra Ranges league. Between Marc Holt at Karingal and Brendan Fevola at his new club Hastings, there are sure to be plenty of goals kicked in Division 2 this season. Karingal will also kick off their 2019 campaign with a new coach at the helm. Brendan Dunne has been appointed.