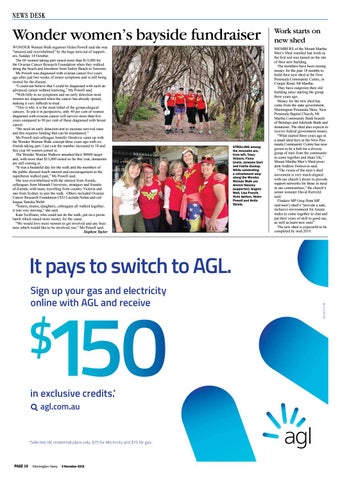 WONDER Woman Walk organiser Helen Powell said she was “amazed and overwhelmed” by the huge turn-out of supporters, Sunday 14 October. The 60 women taking part raised more than $13,000 for the Ovarian Cancer Research Foundation when they walked along the beach and foreshore from Safety Beach to Sorrento. Ms Powell was diagnosed with ovarian cancer five years ago after just two weeks of minor symptoms and is still being treated for the disease. “I could not believe that I could be diagnosed with such an advanced cancer without knowing,” Ms Powell said. “With little to no symptoms and no early detection most women are diagnosed when the cancer has already spread, making it very difficult to treat. “This is why it is the most lethal of the gynaecological cancers. To put it in perspective, only 40 per cent of women diagnosed with ovarian cancer will survive more than five years compared to 90 per cent of those diagnosed with breast cancer. “We need an early detection test to increase survival rates and this requires funding that can be maintained.” Ms Powell and colleague Jennifer Dordevic came up with the Wonder Woman Walk concept three years ago with six friends taking part. Last year the number increased to 18 and this year 60 women joined in. The Wonder Woman Walkers smashed their $9000 target and, with more than $13,000 raised so far this year, donations are still coming in. “It was a beautiful day for the walk and the members of the public showed much interest and encouragement as the superheros walked past,” Ms Powell said. She was overwhelmed with the interest from friends, colleagues from Monash University, strangers and friendsof-friends, with many travelling from country Victoria and one from Sydney to join the walk. Others included Ovarian Cancer Research Foundation CEO Lucinda Nolan and colleague Tamika Webb. “Sisters, mums, daughters, colleagues all walked together; it was very moving,” she said. Kate Sicilliano, who could not do the walk, put on a picnic lunch which raised more money for the cause. “We would love more women to get involved and any business which would like to be involved, too,” Ms Powell said. Stephen Taylor

MEMBERS of the Mount Martha Men’s Shed watched last week as the first sod was turned on the site of their new building. The members have been raising money for the past 18 months to build their new shed at the New Peninsula Community Centre, in Craigie Road, Mt Martha. They have outgrown their old building since starting the group three years ago. Money for the new shed has come from the state government, Mornington Peninsula Shire, New Peninsula Baptist Church, Mt Martha Community Bank branch of Bendigo and Adelaide Bank and donations. The shed also expects to receive federal government money. “What started three years ago in a small shed here at the New Peninsula Community Centre has now grown to be a hub for a diverse group of men from the community to come together and share life,” Mount Martha Men’s Shed president Andrew Doncovio said. “The vision of the men’s shed movement is very much aligned with our church’s desire to provide support networks for those in need in our communities,” the church’s senior minister David Rietveld said. Flinders MP Greg Hunt MP said men’s shed’s “provide a safe, inclusive environment for Aussie males to come together to chat and put their years of skill to good use, as well as learn new ones”. The new shed is expecte4d to be completed by mid-2019.