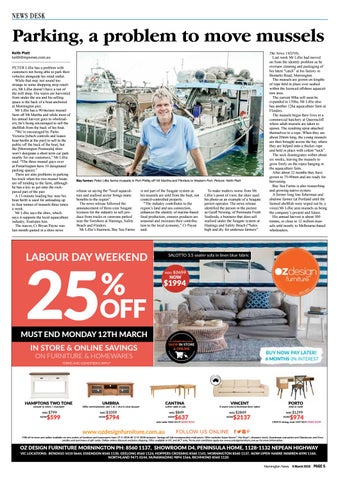 Parking, a problem to move mussels Keith Platt keith@mpnews.com.au PETER Lillie has a problem with customers not being able to park their vehicles alongside his retail outlet. While that may not sound too strange to some shopping strip retailers, Mr Lillie doesn’t have a run of the mill shop. His wares are harvested from under the sea and his selling space is the back of a boat anchored at Mornington pier. Mr Lillie has a 90-hectare mussel farm off Mt Martha and while most of his annual harvest goes to wholesalers, he’s being encouraged to sell the shellfish from the back of his boat. “We’re encouraged by Parks Victoria [which controls and leases boat berths at the pier] to sell to the public off the back of the boat, but the [Mornington Peninsula] shire won’t designate a short term car park nearby for our customers,” Mr Lillie said. “The three mussel guys over at Portarlington have 10 designated parking spaces.” There are also problems in parking his truck when his two mussel boats are off tending to the farm, although he has a key to get onto the rockpaved part of the pier. A 15-minute loading bay near his boat berth is used for unloading up to four tonnes of mussels three times a week. Mr Lillie says the shire, which says it supports the local aquaculture industry, frustrates him. The mayor, Cr Bryan Payne was last month quoted in a shire news

release as saying the “local aquaculture and seafood sector brings many benefits to the region”. The news release followed the announcement of three-year Seagate licences for the industry to sell produce from trucks or caravans parked near the foreshore at Hastings, Safety Beach and Flinders. Mr Lillie’s business, Bay Sea Farms

is not part of the Seagate system as his mussels are sold from the boat, not council-controlled property. “The industry contributes to the region’s land and sea connection, enhances the identity of marine-based food production, ensures products are seasonal and increases their contribution to the local economy,” Cr Payne said.

To make matters worse from Mr Lillie’s point of view, the shire used his photo as an example of a Seagate permit operator. The news release identified the person in the picture as Geoff Newing, of Peninsula Fresh Seafoods, a business that does sell seafood under the Seagate system at Hastings and Safety Beach (“Sales high and dry for undersea farmers”

The News 13/2/18). Last week Mr Lillie had moved on from the identity problem as he oversaw cleaning and packaging of his latest “catch” at his factory in Bennetts Road, Mornington. The mussels are grown on lengths of rope held in place over seabed within the licenced offshore aquaculture area. The current 90ha will soon be expanded to 150ha. Mr Lillie also has another 12ha aquaculture farm at Flinders. The mussels begin their lives in a commercial hatchery at Queenscliff where adult mussels are taken to spawn. The resulting sprat attached themselves to a rope. When they are about 20mm long, the young mussels are then brought across the bay where they are helped onto a thicker rope and held in place with cotton “sock”. The sock disintegrates within about six weeks, leaving the mussels to grow freely on the ropes hanging in the aquaculture farm. After about 12 months they have grown to 75-90mm and are ready for harvesting. Bay Sea Farms is also researching and growing native oysters. A former long line fisherman and abalone farmer (at Portland until the farmed shellfish were wiped out by a virus) Mr Lillie sees mussels as being the company’s present and future. His annual harvest is about 300 tonnes, or close to 12 million mussels sold mostly to Melbourne-based wholesalers.