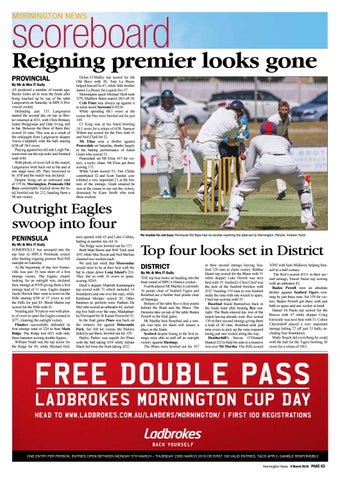 By Mr & Mrs IT Gully AS predicted a number of rounds ago, Baxter looks set to miss the finals after being touched up by top of the table Langwarrin on Saturday in MPCA Provincial cricket. Defending just 135 Langwarrin started the second day on top as Baxter resumed at 4/31, with Chris Brittain, Justin Bridgeman and Dale Irving still to bat. Between the three of them they scored 16 runs. This was as a result of the onslaught from Langwarrin skipper Travis Campbell with the ball snaring 6/38 off 18.4 overs. Playing against his old side Leigh Paterson took out the top order and finished with 4/30. With plenty of overs left in the match, Langwarrin went back out to bat and at one stage were 2/0. They recovered to be 3/58 and the match was declared. Despite being set an awkward total of 175 by Mornington, Peninsula Old Boys comfortably tracked down the total, bowled out for 232, handing them a 58 run victory.

Dylan O’Malley top scored for the Old Boys with 50, Tom La Brooy helped himself to 47, while little brother James La Brooy hit a quick-fire 37. Mornington quick Michael Heib took 3/79, Matthew Bates snared 3/65 off 18. Crib Point was always up against it to track down Sorrento’s 9/236. While spending 68.1 overs at the crease the Pies were bowled out for just 149. CJ King was at his finest bowling 14.1 overs for a return of 6/38. Spencer Wilton top scored for the Pies with 41 and Neil Clark hit 32. Mt Eliza won a thriller against Pearcedale on Saturday, thanks largely to the batting performance of Justin Grant who scored 53. Pearcedale set Mt Eliza 167 for victory; a tricky chase. Mt Eliza got there scoring 171. While Grant scored 53, Tim Clarke contributed 32 and Scott Tansley contributed a very important 21 at the bottom of the innings. Grant ensured he was at the crease to see out the victory, dismissed by Kane Smith who took three wickets.

By Mr & Mrs IT Gully SOMERVILLE has swooped into the top four in MPCA Peninsula cricket after beating reigning premier Red Hill outright on Saturday. At the beginning of day two Somerville was just 34 runs short of a first innings victory. The Eagles, clearly looking for an outright win, declared their innings at 9/109 giving them a first innings lead of 11 runs. Eagles skipper Jayde Herrick then went to town on the Hills snaring 6/38 of 17 overs to roll the Hills for just 83. Brent Martin top scored for the Hills with 41. Needing just 70 runs to win with plenty of overs to spare the Eagles cruised to 3/77, claiming the outright victory. Flinders successfully defended its first innings total of 224 to beat Main Ridge. The Ridge lost 6/21 with only three batsmen scoring double figures. William Noall was the top scorer for the Ridge for 49, while Michael Hol-

mes opened with 43 and Luke Collins, batting at number ten, hit 16. The Ridge were bowled out for 157. Both Matt Burns and Will Tuck took 3/41 while Max Royal and Neil Barfuss claimed two wickets each. We said last week that Moorooduc would need to be at their best with the bat to chase down Long Island’s 216. They did so with 16 overs to spare, scoring 5/245. Duck’s skipper Shamith Kannangara top scored with 71 which included 14 boundaries and one over the rope, while Rashimal Mendez scored 50. Other batsmen to perform were Pathum De Mel who scored an unbeaten 44, including five balls over the rope, Madushanka Pereraand hit 36 Kasun Perera hit 35. In the final game Pines was back on the winners list against Delacombe Park. Set 168 for victory the Parkers failed to get there, bowled out for 129. Harley Parker was superb for Pines with the ball taking 5/54 while Adrian Mack led from the front taking 3/32.

No trouble for old boys: Peninsula Old Boys had no trouble reaching the total set by Mornington. Picture: Andrew Hurst

By Mr & Mrs IT Gully THE top four looks set heading into the final round of MPCA District cricket. Fourth-placed Mt Martha is currently 16 points clear of Seaford Tigers and Rosebud are a further four points clear of Hastings. Bottom of the table Rye is four points behind the Buds and the Blues. The Demons take on top of the table Baden Powell in the final game. Mt Martha host Rosebud and a simple win here for them will ensure a place in the finals. Seaford despite losing in the first innings were able to pull off an outright victory against Hastings. The Blues were bowled out for 107

in their second innings leaving Seaford 120 runs to claim victory. Robbie Hearn top scored for the Blues with 51 while skipper Luke Hewitt was next best with 19. Seaford’s Chris Cleef was the pick of the Seaford bowlers with 5/32. Needing 119 runs to win Seaford made the runs with one wicket to spare, Cleef top scoring with 35. Rosebud found themselves back in the finals hunt after beating Rye outright. The Buds entered day two of the match having already won. Rye scored 130 in their second innings giving them a lead of 30 runs. Rosebud took just nine overs to pick up the runs required losing just one wicket along the way. Heatherhill’s Steven O’Donnell blasted 222 to help his side to a massive win over Mt Martha. The Hills scored

3/305 with Sam Mullavey helping himself to a half century. The Red’s scored 4/111 in their second innings, Simon Street top scoring with an unbeaten 42. Baden Powell won an absolute thriller against Seaford Tigers winning by just three runs. Set 159 for victory Baden Powell got there with just balls to spare and one wicket in hand. Daniel Di Paolo top scored for the Braves with 47 while skipper Craig Entwistle was next best with 31. Cohen Chernishoff played a very important innings hitting 27 off just 33 balls, including four boundaries. Matty Roach did everything he could with the ball for the Tigers bowling 30 overs for a return of 5/63.