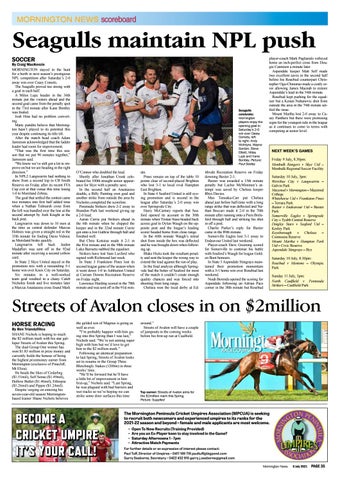 By Craig MacKenzie MORNINGTON stayed in the hunt for a berth in next season’s prestigious NPL competition after Saturday’s 2-0 away win over Casey Comets. The Seagulls proved too strong with a goal in each half. A Milos Lujic header in the 34th minute put the visitors ahead and the second goal came from the penalty spot in the 73rd minute after Kane Bentley was fouled. Josh Hine had no problem converting. Many pundits believe that Mornington hasn’t played to its potential this year despite continuing its title tilt. After the match head coach Adam Jamieson acknowledged that the ladder leader had room for improvement. “That was the first time this season that we put 90 minutes together,” Jamieson said. “We know we’ve still got a lot to improve on but we are heading in the right direction.” In NPL2 Langwarrin had nothing to show from a second trip to CB Smith Reserve on Friday after its recent FFA Cup exit at that venue this time losing 1-0 to Moreland Zebras. The goal that settled the contest came two minutes into first half added time when a Nathan Tidmarsh cross from the left was bundled over the line at the second attempt by Josh Knight at the back post. Langwarrin was down to 10 men at the time as central defender Marcus Holmes was given a straight red in the 35th minute for fouling Dario Vidosic as Moreland broke quickly. Langwarrin left back Jaiden Madafferi was sent off in the 92nd minute after receiving a second yellow card. In State 2 Skye United stayed in the promotion mix with a resounding 5-1 home win over Knox City on Saturday. Six minutes in a well-worked team goal resulted in a classy Caleb Nicholes finish and five minutes later a Marcus Anastasiou cross found Mark

player-coach Mark Pagliarulo volleyed home an inch-perfect cross from Dougie Cunnison a minute later. Aspendale keeper Matt Self made two excellent saves in the second half before his Rosebud counterpart Christopher Ogu-Chinonso made a costly error allowing James Macnab to restore Aspendale’s lead in the 54th minute. Rosebud kept pushing for the equaliser but a Kenan Nuhanovic shot from outside the area in the 74th minute settled the issue. Mount Martha lost 2-0 away to Casey Panthers but there were promising signs for the youngest side in the league as it continues to come to terms with competing at senior level.

O’Connor who doubled the lead. Shortly after Jonathan Crook celebrated his 100th straight senior appearance for Skye with a penalty save. In the second half an Anastasiou double, a Billy Painting own goal and another strike from outside the area by Nicholes completed the scoreline. Peninsula Strikers drew 2-2 away to Brandon Park last weekend giving up a 2-0 lead. Aaran Currie put Strikers ahead in the 6th minute when he chipped the keeper and in the 32nd minute Currie got onto a Jon Guthrie through ball and finished well. But Chris Kotsiras made it 2-1 in the 81st minute and in the 98th minute Luka Barrueto nabbed the equaliser. Strikers have lost Sam Luxford who signed with Richmond last week. In State 3 Frankston Pines lost its second league game of the season when it went down 1-0 to Ashburton United at Carrum Downs Recreation Reserve on Friday night. Lawrence Harding scored in the 78th minute and was sent off in the 91st min-

ute. Pines remain on top of the table 10 points clear of second-placed Brighton who lost 3-1 to local rival Hampton East Brighton. In State 4 Seaford United is still eyeing promotion and is second in the league after Saturday’s 2-0 away win over Springvale City. Harry McCartney reports that Seaford opened its account in the 30th minute when Tristan Stass headed back across goal to Dylan Waugh on the opposite post and the league’s leading scorer headed home from close range. In the 60th minute Waugh’s initial shot from inside the box was deflected and he was brought down when following up. Blake Hicks took the resultant penalty and sent the keeper the wrong way to extend the lead against the run of play. In the final analysis although Springvale had the better of Seaford for most of the match it couldn’t create enough quality chances and was forced into shooting from long range. Chelsea won the local derby at Ed-

ithvale Recreation Reserve on Friday downing Baxter 2-1. Baxter was awarded a 15th minute penalty but Lachie McMinimee’s attempt was saved by Chelsea keeper Rhys Davies. Max Timuska-Carr put Chelsea ahead just before half-time with a long range strike that was deflected and Nathan Boccari made it 2-0 in the 70th minute after running onto a Piers Brelsford through ball and striking his shot in off a post. Charlie Parker’s reply for Baxter came in the 89th minute. Somerville Eagles lost 5-1 away to Endeavour United last weekend. Player-coach Dave Greening scored for Somerville to continue his battle with Seaford’s Waugh for league Golden Boot honours. In State 5 Aspendale Stingrays maintained their promotion momentum with a 3-1 home win over Rosebud last weekend. Noah Berends opened the scoring for Aspendale following an Adrian Pace corner in the 38th minute but Rosebud

Streets of Avalon closes in on $2million HORSE RACING

By Ben Triandafillou SHANE Nichols is hoping to reach the $2 million mark with his star galloper Streets of Avalon this Spring. The dual Group One winner has won $1.83 million in prize money and currently holds the honour of being the highest prizemoney earner from Mornington (exclusive of Pinecliff, Mt Eliza). He heads the likes of Cedarbeg ($1.51mil), Self Sense ($1.49mil), Hollow Bullet ($1.46mil), Ethiopia ($1.26mil) and Pippie ($1.24mil). Despite verging on entering his seven-year-old season Morningtonbased trainer Shane Nichols believes

the gelded son of Magnus is going as well as ever. “I’m probably happier with him going into this Spring than I was last,” Nichols said. “We’re not aiming super high with him but we’d love to get him to the $2 million mark.” Following an identical preparation to last Spring, Streets of Avalon looks set to resume in the Group Three Bletchingly Stakes (1200m) in three weeks’ time. “He’ll be forward but he’ll have a little bit of improvement in him first-up,” Nichols said. “Last Spring, he was plagued with bad barriers and wet tracks so we’re hoping we can strike some drier surfaces this time

around.” Streets of Avalon will have a couple of jumpouts in the coming weeks before his first-up run at Caulfield.

The Mornington Peninsula Cricket Umpires Association (MPCUA) is seeking to recruit both newcomers and experienced umpires to its ranks for the 2021-22 season and beyond – female and male applicants are most welcome. • • • •

Open To New Recruits (Training Provided) Are you an Ex-Player keen to stay involved in the Game? Saturday Afternoons 1 - 7pm Attractive Match Payments