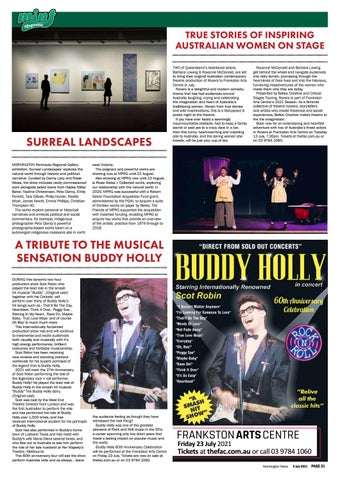 TWO of Queensland’s best-loved actors, Barbara Lowing &amp; Roxanne McDonald, are set to bring their original Australian contemporary theatre production of Rovers to Frankston Arts Centre in July. Rovers is a delightful and modern comedydrama that has had audiences around Australia laughing, crying and celebrating the imagination and heart of Australia’s trailblazing women. Woven from true stories and wild machinations, this is a fast-paced &amp; poetic night at the theatre. If you have ever faced a seemingly insurmountable obstacle, had to keep a family secret or said yes to a crazy dare in a bar, then this funny, heart-warming and crackling ode to Australia, and the daring women she breeds, will be just your cup of tea.

Roxanne McDonald and Barbara Lowing get behind the wheel and navigate audiences into risky terrain, journeying through the heart-lines of their lives and into the hilarious, fun-loving misadventures of the women who made them who they are today. Presented by Belloo Creative and Critical Stages Touring, Rovers is part of Frankston Arts Centre’s 2021 Season. As a feminist collective of theatre makers, storytellers and artists who create theatrical and social experiences, Belloo Creative makes theatre to fire the imagination. Book now for an entertaining and heartfelt adventure with two of Australia’s finest actors in Rovers at Frankston Arts Centre on Tuesday 13 July, 7.30pm. Tickets at thefac.com.au or on 03 9784 1060.

west Victoria. The poignant and powerful works are showing now at MPRG until 22 August. Also showing at MPRG now until 22 August, is Rosie Weiss – Collected works, exploring our relationship with the natural world. In 2020, MPRG was successful with a Robert Salzer Foundation Acquisition Fund grant, administered by the PGAV, to acquire a suite of thirteen works on paper by Weiss. The Friends of MPRG supported the acquisition with matched funding, enabling MPRG to acquire key works that provide an overview of the artists’ practice from 1979 through to 2018.

A TRIBUTE TO THE MUSICAL SENSATION BUDDY HOLLY DURING this dynamic two hour production show Scot Robin who played the lead role in the smash hit musical “Buddy”, (Original cast) together with his Crickets will perform over thirty of Buddy Holly’s hit songs such as - That’ll Be The Day, Heartbeat, Think It Over, Peggy Sue , Raining In My Heart, Rave On, Maybe Baby, True Love Ways and of course Oh Boy! &amp; much much more. This Internationally Acclaimed production show has and will continue to mesmerise and excite audiences both visually and musically with it’s high energy performance, brilliant costumes and fantastic musicianship. Scot Robin has been receiving rave reviews and standing ovations worldwide for his superb portrayal of the legend that is Buddy Holly. 2021 will mark the 27th Anniversary of Scot Robin performing the role of the legendary rock n roll performer, Buddy Holly! He played the lead role of Buddy Holly in the smash hit musical &quot;Buddy&quot; The Buddy Holly story, (Original cast) Scot was cast by the West End Theatre Director from London and was the first Australian to perform the role and has performed the role of Buddy Holly over 1,000 times, and has received international acclaim for his portrayal of Buddy Holly. Scot has also performed in Buddy&#39;s home town of Lubbock Texas and has meet with Buddy&#39;s wife Maria Elena several times, and who flew out to Australia to see him perform the role of her late husband at Her Majesty&#39;s Theatre, Melbourne. This 60th anniversary tour will see the show perform Australia wide and as always... leave

the audience feeling as though they have witnessed the real thing!! Buddy Holly was one of the greatest pioneers of Rock and Roll music in the 50&#39;s, a career spanning only two short years that made a lasting impact on popular music and the world. Buddy Holly 60th Anniversary Celebration will be performed at the Frankston Arts Centre on Friday 23 July. Tickets are now on sale at thefac.com.au or on 03 9784 1060.