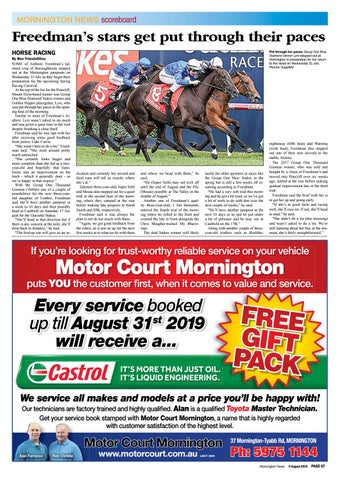 Freedman’s stars get put through their paces HORSE RACING

By Ben Triandafillou SOME of Anthony Freedman’s talented crop of thoroughbreds stepped out at the Mornington jumpouts on Wednesday 31 July as they begin their preparation for the upcoming Spring Racing Carnival. At the top of the list for the Pinecliff, Mount Eliza-based trainer was Group One Blue Diamond Stakes winner and Golden Slipper placegetter, Lyre, who was put through her paces in the opening heat of the morning. Similar to most of Freedman’s triallers, Lyre wasn’t asked to do much and was given a quiet time in her trial despite finishing a close third. Freedman said he was rapt with her after receiving some good feedback from jockey Luke Currie. “She wasn’t here to do a lot,” Freedman said. “She went around pretty much untouched. “She certainly looks bigger and more complete than she did as a twoyear-old and hopefully that transforms into an improvement on the track - which it generally does - so we’re happy in that respect.” With the Group One Thousand Guineas (1600m) one of a couple of possibilities for the now three-yearold daughter of Lonhro, Freedman said she’ll have another jumpout in a week to 10 days and then possibly head to Caulfield on Saturday 17 August for the Quezette Stakes. “She’ll head in that direction but if there is any concern at the mile, she’ll drop back in distance,” he said. “The first-up run will give us an in-

Put through her paces: Group One Blue Diamond winner Lyre stepped out at Mornington in preparation for her return to the races on Wednesday 31 July. Picture: Supplied

dication and certainly her second and third runs will tell us exactly where she’s at.” Talented three-year-olds Super Seth and Meuse also stepped out for a quiet trial in the second heat of the morning, where they camped at the rear before making late progress to finish fourth and fifth, respectively. Freedman said it was always the plan to not do too much with them. “Again, we got good feedback from the riders, so it sets us up for the next few weeks as to what we do with them

and where we head with them,” he said. “He (Super Seth) may not kick off until the end of August and the filly (Meuse) possibly at The Valley in the middle of August.” Another one of Freedman’s quality three-year-olds, I Am Immortal, entered the fourth trial of the morning where he rolled to the front and crossed the line in front alongside the Chris Meagher-trained My Bluewings. The dual Stakes winner will likely

tackle the older sprinters in races like the Group One Moir Stakes in the spring but is still a few weeks off resuming according to Freedman. “He had a very soft trial this morning and he got a bit tired, so we’ve got a bit of work to do with him over the next couple of weeks,” he said. “He’ll have another jumpout in the next 10 days or so and be put under a bit of pressure and he may run at Caulfield on the 17th.” Along with another couple of threeyear-old triallers such as Rockthe-

nightaway (fifth heat) and Warning (sixth heat), Freedman also stepped out one of their new arrivals to the stable, Aloisia. The 2017 Group One Thousand Guineas winner, who was sold and bought by a client of Freedman’s and moved into Pinecliff over six weeks ago, settled at the rear before making gradual improvement late in the third trial. Freedman said the brief with her is to get her up and going early. “If she’s in good form and racing well, she’ll race on. If not, she’ll head to stud,” he said. “She didn’t do a lot (this morning) and wasn’t asked to do a lot. We’re still learning about her but, at the moment, she’s fairly straightforward.”

puts YOU the customer first, when it comes to value and service.

Every service booked st up till August 31 2019 will receive a... IT’S MORE THAN JUST OIL. IT’S LIQUID ENGINEERING. NG.

We service all makes and models at a price you’ll be happy with! Our technicians are factory trained and highly qualified. Alan is a qualified Toyota Master Technician. Get your service book stamped with Motor Court Mornington, a name that is highly regarded with customer satisfaction of the highest level.