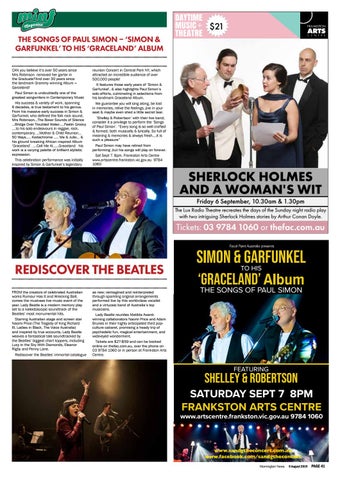 $21 THE SONGS OF PAUL SIMON – ‘SIMON & GARFUNKEL’ TO HIS ‘GRACELAND’ ALBUM CAN you believe it’s over 50 years since Mrs Robinson removed her garter in the Graduate?And over 30 years since the landmark Grammy winning Album – Garceland! Paul Simon is undoubtedly one of the greatest songwriters in Contemporary Music His success & variety of work, spanning 6 decades, is true testament to his genius. From his massive early success in Simon & Garfunkel, who defined the folk rock sound, Mrs Robinson…The Boxer Sounds of Silence …Bridge Over Troubled Water..…Feelin Groovy ….to his solo endeavours in reggae, rock, contemporary. …Mother & Child Reunion… 50 Ways….. Kodachrome ….. Me & Julio… & his ground breaking African inspired Album ‘Graceland’. ….Call Me Al……Graceland his work is a varying palette of brilliant stylistic expression. This celebration performance was initially inspired by Simon & Garfunkel’s legendary

reunion Concert in Central Park NY, which attracted an incredible audience of over 500,000 people! It features those early years of ‘Simon & Garfunkel’, & also highlights Paul Simon’s solo efforts, culminating in selections from his landmark Graceland Album. We guarantee you will sing along, be lost in memories, relive the feelings, jive in your seat & maybe even shed a little secret tear. ‘Shelley & Robertson’ with their live band, consider it a privilege to perform the ‘Songs of Paul Simon’. “Every song is so well crafted & formed, both musically & lyrically. So full of meaning & memories & always fresh….it is such a pleasure” Paul Simon may have retired from performing ,but his songs will play on forever. Sat Sept 7. 8pm. Frankston Arts Centre www.artscentre.frankston.vic.gov.au 9784 1060

REDISCOVER THE BEATLES FROM the creators of celebrated Australian works Rumour Has It and Wrecking Ball, comes the must-see live music event of the year. Lady Beatle is a modern memory play set to a kaleidoscopic soundtrack of the Beatles’ most monumental hits. Starring Australian stage and screen star Naomi Price (The Tragedy of King Richard III, Ladies in Black, The Voice Australia) and inspired by true accounts, Lady Beatle weaves a fantastical tale soundtracked by the Beatles’ biggest chart toppers, including Lucy in the Sky With Diamonds, Eleanor Rigby and Penny Lane. Rediscover the Beatles’ immortal catalogue

as new; reimagined and reinterpreted through sparkling original arrangements performed live by this world-class vocalist and a virtuosic band of Australia’s top musicians. Lady Beatle reunites Matilda Awardwinning collaborators Naomi Price and Adam Brunes in their highly anticipated third popculture cabaret, promising a heady trip of psychedelic fun, magical entertainment, and wide-eyed wonderment. Tickets are $27-$59 and can be booked online on thefac.com.au, over the phone on 03 9784 1060 or in person at Frankston Arts Centre.

SIMON & GARFUNKEL TO HIS