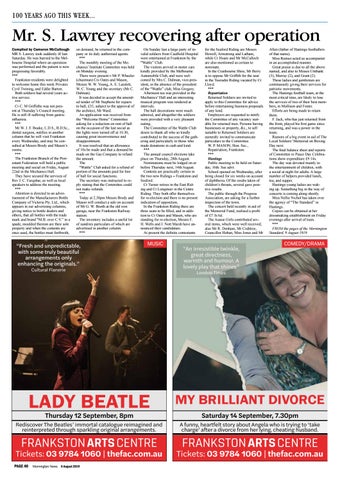 Mr. S. Lawrey recovering after operation Compiled by Cameron McCullough MR S. Lawrey took suddenly ill last Saturday. He was hurried to the Melbourne Hospital where an operation was performed and the patient is now progressing favorably. *** Frankston residents were delighted to welcome home this week Privates Cyril Twining, and Eddie Barton. Both soldiers had several years active service. *** Cr C. M Griffeths was not present at Thursday’s Council meeting. He is still ill suffering from gastric influenza. *** Mr W. J. F. Boake, L.D.S., B.D.Sc., dental surgeon, notifies in another column that he will visit Frankston every Wednesday, and may be consulted at Messrs Brody and Mason’s rooms. *** The Frankston Branch of the Protestant Federation will hold a public meeting and social on Friday, August 22nd in the Mechanics Hall. They have secured the services of Rev J. C. Farquhar, as well as local speakers to address the meeting. *** Attention is directed to an advertisement of the Manufacturers Bottle Company of Victoria Pty. Ltd., which appears in our advertising columns, giving notice to bottle dealers and others, that all bottles with the trade mark and brand “M.B. over C.V.” in a spade, moulded thereon are their sole property and when the contents are once used, the bottles must forthwith,

on demand, be returned to the company or its duly authorised agents. *** The monthly meeting of the Mechanics’ Institute Committee was held on Monday evening. There were present – Mr P. Wheeler (chairman) Crs Oates and Mason, Messrs W. W. Young, A. E. Lasslett, W. C. Young and the secretary (Mr C. Dalman). It was decided to accept the amended tender of Mr Stephens for repairs to hall, £35, subject to the approval of the architect, Mr Ward. An application was received from the “Welcome Home” Committee asking for a reduction on rent of hall on the occasion of the last social as the lights were turned off at 10.30, causing great inconvenience and disappointment. It was resolved that an allowance of 10s be made and that a demand be made on the Gas Company to refund the amount. The “Wattle” Club asked for a refund of portion of the amounts paid for hire of hall for social functions. The secretary was instructed to reply stating that the Committee could not make refunds. *** Today at 2.30pm Messrs Brody and Mason will conduct a sale on account of Mr G. W. Booth at the old iron garage, near the Frankston Railway station. The inventory includes a useful lot of sundries particulars of which are advertised in another column. ***

“Fresh and unpredictable, with some truly beautiful arrangements only enhancing the originals.”

On Sunday last a large party of invalid soldiers from Caulfield Hospital were entertained at Frankston by the “Wattle” Club. The visitors arrived in motor cars kindly provided by the Melbourne Automobile Club, and were welcomed by Mrs C. Dalman, vice-president, in the absence of the president of the “Wattle” club, Miss Gregory. Afternoon tea was provided in the Mechanics’ Hall and an interesting musical program was rendered at intervals. The hall decorations were much admired, and altogether the soldiers were provided with a very pleasant outing. The Committee of the Wattle Club desire to thank all who so kindly contributed to the success of the gathering and particularly to those who made donations in cash and kind. *** The annual council elections take place on Thursday, 28th August. Nominations must be lodged on or before Thursday next, 14th August. Contests are practically certain in the two new Ridings – Frankston and Seaford. Cr Turner retires in the East Riding and Cr Longmuir in the Centre Riding. They both offer themselves for re-election and there is no present indication of opposition. In the Frankston Riding there are three seats to be filled, and in addition to Cr Oates and Mason, who are standing for re-election, Messrs F. H. Wells and J. Nott Marsh have announced their candidature. At present the definite contestants

for the Seaford Riding are Messrs Howell, Armstrong and Latham, while Cr Hoare and Mr McCulloch are also mentioned as certain to nominate. In the Cranbourne Shire, Mr Berry is to oppose Mr Griffith for the seat in the Tooradin Riding vacated by Cr Lloyd. *** Repatriation Returned Soldiers are invited to apply to this Committee for advice before entertaining business proposals of any kind. Employers are requested to notify the Committee of any vacancy suitable for returned men. Persons having businesses or property, &c., to sell suitable to Returned Soldiers are earnestly invited to communicate particulars to the Committee. W. P. MASON, Hon. Sec., Repatriation, Frankston. *** Hastings Public meeting to be held on Saturday, 16th. See advt. School opened on Wednesday, after being closed for six weeks on account of diphtheria. Of the swabs taken of children’s throats, several gave positive results. The public through the Progress Association, are asking for a further inspection of the town. The concert held recently in aid of the Memorial Fund, realised a profit of £7 3s 6d. The Aussie Girls contributed several items, which were well received; also Mr R. Denham, Mr Crabtree, Councillor Hoban, Miss Jones and Mr

“An irresistible twinkle, great directness, warmth and humour. A lovely play that shines”

Allen (father of Hastings footballers of that name). Miss Romeo acted as accompanist in an accomplished manner. Great praise is due to all the above named, and also to Misses Unthank (3), Murray (2), and Grant (2). These ladies and gentlemen are continuously giving their services for patriotic movements. The Hastings football team, at the most critical time, are likely to lose the services of two of their best members, in Mollison and Foster. Efforts are being made to retain them. F. Jack, who has just returned from the front, played his first game since returning, and was a power in the team. Rumors of a big event in aid of The Local Soldiers’ Memorial on Boxing Day next. The final balance sheet and reports of Committee re Peace Day Celebrations show expenditure £9 14s. The day was devoted mainly to the entertainment of children, with a social at night for adults. A large number of helpers provided lunch, tea, and supper. Hastings young ladies are waking up. Something big in the way of concerts is coming along shortly. Miss Nellie Nichol has taken over the agency of “The Standard” in Hastings. Copies can be obtained at her dressmaking establishment on Friday evenings after arrival of train. *** FROM the pages of the Mornington Standard, 9 August 1919

A funny, heartfelt story about Angela who is trying to ‘take charge’ after a divorce from her lying, cheating husband.