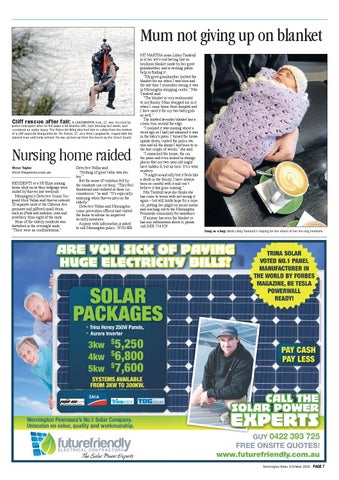 Mum not giving up on blanket

A LANGWARRIN man, 17, was rescued by police helicopter after he fell down a Mt Martha cliff, 2pm Monday last week, and sustained an ankle injury. The Police Air Wing winched him to safety from the bottom of a cliff opposite Margeurita Av. His friend, 17, also from Langwarrin, stayed with the injured man until help arrived. He was picked up from the beach by the Coast Guard.

Nursing home raided Steve Taylor steve@mpnews.com.au RESIDENTS at a Mt Eliza nursing home slept on as their lodgings were raided by thieves last weekend. Mornington’s Detective Senior Sergeant Nick Vallas said thieves entered 20 separate units at the Osborne Ave premises and pilfered small items, such as iPads and mobiles, cash and jewellery, from eight of the units. None of the elderly residents was disturbed in the overnight raids. “There were no confrontations,”

Detective Vallas said. “Nothing of great value was stolen.” But the sense of violation felt by the residents can cut deep. “They feel threatened and violated in these circumstances,” he said. “It’s especially annoying when thieves prey on the elderly.” Detective Vallas said Mornington crime prevention officers had visited the home to advise on improved security measures. Anyone with information is asked to call Mornington police, 59781400.

MT MARTHA mum Libby Turnbull is at her wit’s end having lost an heirloom blanket made by her great grandmother, and is seeking public help in finding it. “My great grandmother knitted the blanket for me when I was born and the last time I remember seeing it was in Mornington shopping centre,” Mrs Turnbull said. “The blanket is very sentimental to my family. Mum wrapped me in it when I came home from hospital and I have used it for my two baby girls as well.” The knitted lavender blanket has a cream trim around the edge. “I realised it was missing about a week ago as I had just assumed it was in the baby’s pram. I turned the house upside down, visited the police station and all the shops I had been to in the last couple of weeks,” she said. “I ransacked the house, the car, the pram and even looked in strange places that my two-year-old might have hidden it, but no luck. It’s a total mystery. “It might sound silly but it feels like a death in the family. I have always been so careful with it and can’t believe it has gone missing.” Mrs Turnbull says she thinks she has come to terms with not seeing it again – but still holds hope for a miracle, putting her plight on social media and reaching out to the Mornington Peninsula community for assistance. If anyone has seen the blanket or has any information about it, please call 0438 754 929. Snug as a bug: Mum Libby Turnbull is hoping for the return of her missing heirloom.