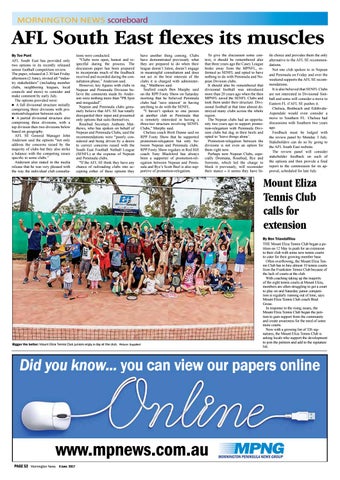 AFL South East flexes its muscles By Toe Punt AFL South East has provided only two options in its recently released senior football competition review. The paper, released at 2.30 last Friday afternoon (2 June), invited all “industry stakeholders” (including member clubs, neighboring leagues, local councils and more) to consider and make comment by early July. The options provided were: n A full divisional structure initially comprising three divisions with promotion/relegation between each. n A partial divisional structure also comprising three divisions, with a top division then two divisions below based on geography. AFL SE General Manager John Anderson said the options “not only address the concerns raised by the majority of clubs but they also strike a balance with the competing issues specific to some clubs.” Anderson also stated in the media release that he was very pleased with the way the individual club consulta-

tions were conducted. “Clubs were open, honest and respectful during the process. The discussion paper has been prepared to incorporate much of the feedback received and recorded during the consultation phase,” Anderson said. However, key figures with clubs in Nepean and Peninsula Division believe the comments made by Anderson were nothing more than “PR Spin and misguided”. Nepean and Peninsula clubs genuinely believe that AFL SE has totally disregarded their input and presented only options that suits themselves. Rosebud Secretary Anthony Matthews, who has spoken on behalf of Nepean and Peninsula Clubs, said the recommendations were “poorly considered and being driven by a desire to correct concerns raised with the South East Football Netball League (SENFL) at the expense of Nepean and Peninsula clubs. “If the AFL SE think they have any chance of railroading clubs into accepting either of these options they

have another thing coming. Clubs have demonstrated previously what they are prepared to do when their league doesn’t listen, doesn’t engage in meaningful consultation and does not act in the best interests of the clubs it is charged with administering,” Matthews said. Seaford coach Ben Murphy said on the RPP Footy Show on Saturday morning that he believed Peninsula clubs had ‘zero interest’ in having anything to do with the SENFL. “I haven’t spoken to one person at another club in Peninsula that is remotely interested in having a three-tier structure involving SENFL Clubs,” Murphy said. Chelsea coach Brett Dunne said on RPP Footy Show that he supported promotion-relegation but only between Nepean and Peninsula clubs. RPP Footy Show regulars in Red Hill coach Tony Blackford has always been a supporter of promotion-relegation between Nepean and Peninsula and Rye’s Scott Beel is also supportive of promotion-relegation.

To give the discussion some context, it should be remembered also that three years ago the Casey League broke away from the MPNFL, reformed as SENFL and opted to have nothing to do with Peninsula and Nepean Division clubs. It should also be remembered that divisional football was introduced more than 20 years ago when the then MPNFL saved the SENFL Clubs and took them under their structure. Divisional football at that time almost destroyed many clubs across the whole region. The Nepean clubs had an opportunity two years ago to support promotion-relegation with Peninsula Division clubs but dug in their heels and opted to ‘leave things alone’. Promotion-relegation between the divisions is not even an option for them right now. Perhaps now Nepean Clubs, especially Dromana, Rosebud, Rye and Sorrento, which led the charge to block it previously, will reconsider their stance – it seems they have lit-

tle choice and provides them the only alternative to the AFL SE recommendations. Not one club spoken to in Nepean and Peninsula on Friday and over the weekend supports the AFL SE recommendations. It is also believed that SENFL Clubs are not interested in Divisional football and some will consider a move to Eastern FL if AFL SE pushes it. Chelsea, Bonbeach and EdithvaleAspendale would even consider a move to Southern FL. Chelsea had discussions with Southern two years ago. Feedback must be lodged with the review panel by Monday 3 July. Stakeholders can do so by going to the AFL South East website. The review panel will consider stakeholder feedback on each of the options and then provide a final report to the commission for its approval, scheduled for late July.