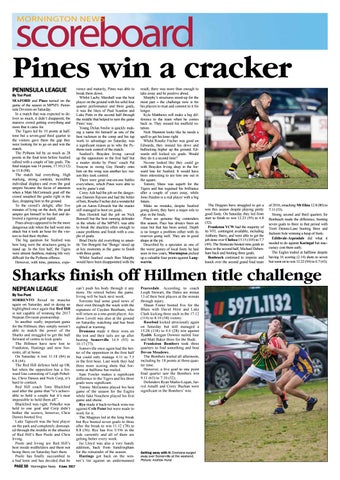 By Toe Punt SEAFORD and Pines turned on the game of the season in MPNFL Peninsula Division on Saturday. In a match that was expected to deliver so much, it didn’t disappoint, the massive crowd getting everything and more that it came for. The Tigers led by 10 points at halftime but a seven-goal third quarter to the visitors gave them the gap they were looking for to go on and win the match. The Pythons led by as much as 28 points in the final term before Seaford rallied with a couple of late goals. The final margin was 14 points, 17.10 (112) to 15.8 (98). The match had everything. High marking, strong contests, incredible individual displays and even the goal umpire became the focus of attention when a Matt McCormack goal off the crowd smashed the goalie right in the face, dropping him to the ground. To the crowd’s delight, after five minutes of lying on the deck, the goal umpire got himself to his feet and delivered a rigorous goal signal. Pines always appeared to be the more dangerous side when the ball went into attack but it took an hour for the visitors to find their rhythm. The big question for Seaford was how long were the structures going to stand up. In the first half, the Tigers were almost faultless, making life very difficult for the Pythons offence. However, with time, patience, expe-

rience and maturity, Pines was able to break them down. Whilst Lachy Marshall was the best player on the ground with his solid four quarter performance and three goals, it was the likes of Paul Scanlon and Luke Potts in the second half through the middle that helped to turn the game Pines’ way. Young Dylan Smilie is quickly making a name for himself as one of the best ruckmen in the comp and his tap work to advantage on Saturday was a significant reason as to why the Pythons took control of the match. Seaford’s Brayden Irving carved up the opposition in the first half but a master stroke by Pines’ coach Pat Swayne to swing Guy Hendry onto him on the wing was another key reason they took control. There were great one-on-one battles everywhere, which Pines were able to win by game’s end. Corey Ash had the job on the dangerous Damien Rayson and had the better of him, Rourke Fischer did a wonderful job on Aaron Edwards but the master still managed to boot six goals. Ben Howlett had the job on Nick Boswell but the best running defender in the whole of the MPNFL was able to break the shackles often enough to cause problems and finish with a couple of goals. Brad Doyle did everything to unsettle Tim Bongetti but ‘Bongo’ stood up at key moments in the game to finish with three goals. Whilst Seaford coach Ben Murphy would have been disappointed with the

result, there was more than enough to take away and be positive about. Murphy’s structures stood-up for the most part – the challenge now is for his players to trust and commit to it for longer. Kyle Matthews will make a big difference to the team when he comes back in. They missed his midfield rotation. Nick Shannon looks like he needs a spell to get his knee right. Whilst Rourke Fischer was good on Edwards, they missed his drive and bullocking higher up the ground. Edwards still kicked six goals. Would they do it a second time? No-one looked like they could go with Brayden Irving deep in the forward line for Seaford. It would have been interesting to see him one out in the square. Tommy Shaw was superb for the Tigers and has regained his brilliance after a couple of years away, while Jono Haidon is a real player with a big future. Make no mistake, despite Seaford going down, they have a major role to play in the finals. Pines are genuine flag contenders this season. Pace has always been an issue but that has been sorted. Depth is no longer a problem either with its reserves going well. They are in good shape at the pit. Described by a spectator as one of the worst games of local footy he had seen in two years, Mornington picked up a valuable four points against Langwarrin.

The Doggies have struggled to get a win this season despite playing pretty good footy. On Saturday they led from start to finish to win 12.23 (95) to 4.8 (32). Frankston YCW had the majority of its VFL contingent available, including Anthony Barry, and were able to get the job done over Chelsea 15.15 (105) to 7.7 (49). The Stonecats booted nine goals to three in the second half, Michael Debenham back and booting three goals. Bonbeach continued to impress and knock over the second grand final team

of 2016, smacking Mt Eliza 12.8 (80) to 7.11 (53). Strong second and third quarters for Bonbeach made the difference, booting seven goals to three in that period with Trent Dennis-Lane booting three and Jackson Sole winning a heap of footy. Edithvale-Aspendale did what it needed to do against Karingal but inaccuracy cost them early. The Eagles trailed at halftime despite having 16 scoring (2.14) shots to seven but went on to win 12.22 (94) to 6.7 (43).

By Toe Punt SORRENTO flexed its muscles again on Saturday and in doing so highlighted once again that Red Hill is not capable of winning the 2017 Nepean Division premiership. In another really important game for the Hillmen, they simply weren’t able to match the power of the Sharks and struggled to get the ball forward of centre to kick goals. The Hillmen have now lost to Frankston, Hastings and now Sorrento, all at home. On Saturday it lost 11.18 (84) to 6.8 (44). The Red Hill defence held up OK but when the opposition has a forward line consisting of Leigh Poholke, Chris Dawes and Nick Corp, it’s hard to contain. Red Hill coach Tony Blackford said after the game that “it’s achievable to hold a couple but it’s near impossible to hold them all”. Blackford was right. Poholke was held to one goal and Corp didn’t bother the scorers, however, Chris Dawes booted five. Luke Tapscott was the best player on the park and completely dominated through the middle in the absence of Red Hill’s Ben Poole and Chris Irving. Poole and Irving are Red Hill’s best inside midfielders and them not being there on Saturday hurt them. Poole has finally succumbed to a bad knee and has decided that he

can’t push his body through it any more. He retired before the game. Irving will be back next week. Sorrento had some good news of their own through the week with the signature of Cayden Beetham, who will return as a one-point player. Andrew Lovett was also at the ground on Saturday watching and has been sighted at training. Dromana made it three wins on the trot and their tails are up after beating Somerville 14.9 (93) to 10.17 (77). Somerville once again had the better of the opposition in the first half but could only manage 4.11 to 7.5 in the first hour. Last week they had three more scoring shots that Sorrento at halftime but trailed. Sam Fowler makes a significant difference to the Tigers and his three goals were significant. Timmy McGennis played his best game of the season for the Eagles while Jake Neuchew played his first game and shone. Rye made it back-to-back wins too against Crib Point but were made to work for it. The Magpies led at the long break but Rye booted seven goals to three after the break to win 11.12 (78) to 8.8 (56). Rye has five U19s in the side currently and all of them are getting better every week. Jai Lloyd was also a very handy addition, back from Sandringham for the remainder of the season. Hastings got back on the winner’s list against an undermanned

Pearcedale. According to coach Leigh Stewart, the Dales are minus 13 of their best players at the minute through injury. Shaun Foster booted five for the Blues with David Hirst and Luke Clark kicking three each in the 17.12 (114) to 8.10 (58) victory. Rosebud kicked atrociously again on Saturday but still managed a 15.28 (118) to 4.4 (28) win against Tyabb. Keegan Downie nailed four and Matt Baker three for the Buds. Frankston Bombers took three quarters to find something and beat Devon Meadows. The Bombers trailed all afternoon, including by 18 points at three-quarter time. However, a five goal to one point final quarter saw the Bombers win 9.11 (65) to 7.10 (52). Defenders Ryan Marks-Logan, Jarryd Amalfi and Corey Buchan were significant in the Bombers’ win.

Getting away with it: Dromana surged away over Somerville at the weekend. Picture: Andrew Hurst