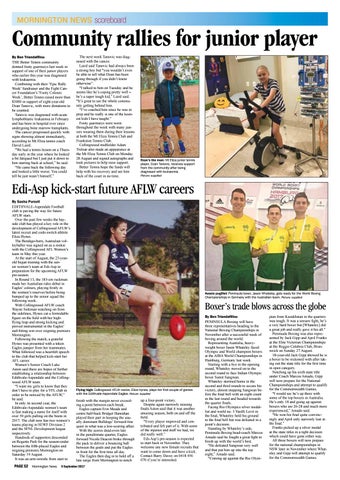 Community rallies for junior player By Ben Triandafillou THE Better Tennis community donned footy guernseys last week in support of one of their junior players who earlier this year was diagnosed with leukaemia. Combining with their ‘Epic Rally Week’ fundraiser and the Fight Cancer Foundation’s ‘Footy Colours Week’, Better Tennis raised more than $5000 in support of eight-year-old Dzan Tanovic, with more donations to be counted. Tanovic was diagnosed with acute lymphoblastic leukaemia in February and has been in hospital ever since undergoing bone marrow transplants. The cancer progressed quickly with signs showing almost immediately, according to Mt Eliza tennis coach David Laird. “We had a tennis lesson on a Thursday early in the year where he looked a bit fatigued but I just put it down to him starting back at school,” he said. “He came back the following day and looked a little worse. You could tell he just wasn’t himself.”

The next week Tanovic was diagnosed with the cancer. Laird said Tanovic had always been a strong boy but “you wouldn’t even be able to tell what Dzan has been going through if you didn’t know otherwise”. “I talked to him on Tuesday and he seems like he’s coping pretty well – he’s a super tough kid,” Laird said. “It’s great to see the whole community getting behind him. “I’ve coached him since he was in prep and he really is one of the keenest kids I have taught.” Footy guernseys were worn throughout the week with many juniors wearing them during their lessons at both the Mt Eliza Tennis Club and Frankston Tennis Club. Collingwood midfielder Adam Treloar also made an appearance at the Mt Eliza Tennis Club on Monday 28 August and signed autographs and took pictures to help raise support. Better Tennis hope the funds will help with his recovery and see him back of the court in no time.

Edi-Asp kick-start future AFLW careers By Sasha Pursell EDITHVALE-Aspendale Football club is paving the way for future AFLW stars. Over the past few weeks the bayside club has played a key role in the development of Collingwood AFLW’s latest recruit and code-switch athlete Eliza Hynes. The Bendigo-born, Australian volleyballer was signed on as a rookie with the Collingwood AFL Women’s team in May this year. At the start of August, the 25-yearold began training with the senior women’s team at Edi-Asp in preparation for the upcoming AFLW pre-season. In Round 13, the 183-cm ruckman made her Australian rules debut in Eagles’ colours, playing firstly in the women’s reserves before being bumped up to the senior squad the following week. With Collingwood AFLW coach Wayne Siekman watching on from the sidelines, Hynes cut a formidable figure on the field with her highflying leap and strong kicking and proved instrumental in the Eagles’ nail-biting win over reigning premiers Mornington. Following the match, a grateful Hynes was presented with a token Eagles jumper from her teammates. What followed was a heartfelt speech to the club that helped kick-start her AFL career. Women’s Senior Coach Luke Aston said there are hopes of further establishing a relationship between Edithvale-Aspendale and the Collingwood AFLW team. “I want my girls to know that they don’t have to play for a VFL club in order to be noticed by the AFLW,” he said. In only its second year, the Edithvale-Aspendale women’s team is fast making a name for itself with over 50 girls pulling on the boots in 2017. The club now has two women’s teams playing in SEWF Division 2 and the SFNL Development league respectively. Hundreds of supporters descended on Regents Park for the season-ender between the fifth-placed Eagles and reigning premiers Mornington on Saturday 19 August. It was an arm-wrestle from start to

Boxer’s trade blows across the globe

finish with the margin never exceeding a point between each break. Eagles captain Erin Meade and centre half-back Bridget Hanrahan played their part in keeping the usually dominant Bulldogs’ forward-line quiet in what was a low-scoring affair. With the scores dead-even late in the penultimate quarter, Eagles forward Nicola Deacon broke through the pack to deliver a bouncing ball between the goals and put the Eagles in front for the first time all day. The Eagles then dug in to hold off a late surge from Mornington to notch

up a four-point victory. Despite again narrowly missing finals Aston said that it was another amazing season, both on and off the field. “Every player improved and contributed and felt part of it. With some of the injuries and stuff we had, we did really well.” Edi-Asp’s pre-season is expected to start back in November. They welcome any new female recruits that want to come down and have a kick. Contact Barry Davey on 0418 456 070 if you’re interested.

By Ben Triandafillou PENINSULA Boxing will have three representatives heading to the National Boxing Championships in November after a successful week of boxing around the world. Representing Australia, heavyweight boxer Jason Whateley faced Olympic and World champion boxers at the AIBA World Championships in Hamburg, Germany last week. Starting with a bye in the opening round, Whateley moved on to the second round to face Indian Olympic boxer Sumit Sangwan. Whateley stormed home in the second and third rounds to secure his victory, almost stopping Sangwan before the final bell with an eight count in the last round and headed towards the quarter finals. Facing Rio Olympics silver medallist and world no. 3 Vasilli Levit in the final, Whateley held his ground to the final bell but was defeated in a point’s decision. Standing by Whateley’s side, Peninsula Boxing head-coach Marcos Amado said he fought a great fight to finish up with the world’s best. “He defeated Sangwan very well and that put him up into the top eight,” Amado said. “Coming up against the Rio Olym-

pian from Kazakhstan in the quarters was tough. It was a seesaw fight, he’s a very hard boxer but [Whateley] did a great job and really gave it his all.” Peninsula Boxing was also represented by Jack Gipp and April Franks at the Elite Victorian Championships at the Reggio Calabria Club, Brunswick on Sunday 27 August. 18-year-old Jack Gipp showed he is a boxer to be reckoned with after taking out the state title for the first time in open category. Notching up his sixth state title under Coach Marcos Amado, Gipp will now prepare for the National Championships and attempt to qualify for the Commonwealth Games. “I would say he’s up there with some of the top boxers in Australia. He’s only 18 and going up against boxers who are 26-28 and much more experienced,” Amado said. “He won his final quite convincingly and April only narrowly lost in the final.” Franks picked up a silver medal at the state titles in a tight decision which could have gone either way. All three boxers will now prepare for the national championships in NSW later in November where Whateley and Gipp will attempt to qualify for the Commonwealth Games.