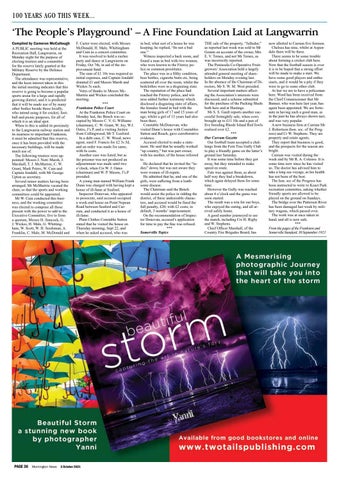 ‘The People’s Playground’ – A Fine Foundation Laid at Langwarrin Compiled by Cameron McCullough A PUBLIC meeting was held at the Recreation Hall, Langwarrin, on Monday night for the purpose of electing trustees and a committee for the reserve lately granted at the Military Reserve by the Defence Department. The attendance was representative, and the keen interest taken in this the initial meeting indicates that this reserve is going to become a popular sports arena for a large and rapidly growing district, and it is predicted that it will be made use of by many other bodies beside those locally, who intend using it for cricket, football and picnic purposes, for all of which it is an ideal spot. When to this is added its proximity to the Langwarrin railway station and its nearness to important Frankston, it must be admitted that this reserve, once it has been provided with the necessary buildings, will be made much use of. The following trustees were appointed: Messrs J. Nott–Marsh, J. Marshall, T. J. McMurtrie, C. W. Grant, Mark Peters, W. Cain and Captain Jondahl, with Mr George Upton as secretary. Several minor matters having been arranged, Mr McMurtrie vacated the chair, so that the sports and working committees could be appointed. Mr W. Cain conducted this business, and the working committee was elected to comprise all those present with the power to add to the Executive Committee, five to form a quorum, Messrs H. Simcock, G. J. Wickes, H. Male, G. Whittingham, W. Scott, W. H. Seedsman, A. Franklin, C. Male, M. McDonald and

F. Carter were elected, with Messrs McDonald, H. Male, Whittingham and Cain as a concert committee. It was resolved to hold a euchre party and dance at Langwarrin on Friday, Oct 7th, in aid of the improvement fund. The sum of £1 10s was required as initial expenses, and Captain Jondahl donated £1 and Messrs Marsh and Wickes 5s each. Votes of thanks to Messrs McMurtrie and Wickes concluded the meeting. *** Frankston Police Court At the Frankston Police Court on Monday last, the Bench was occupied by Messrs C. V. G. Williams (chairman), C. W. Grant, W. Joy, W.J. Oates, J’s.P, and a visiting Justice from Collingwood, Mr T. Luxford. In a debt case, C. W. Wood, news agent, sued F. Francis for £2 3s 5d, and an order was made for same, with 6s costs. Another case was listed, but as the prisoner was not produced an adjournment was made until two o’clock, when Crs W. J. Oates (chairman) and W. P. Mason, J’s.P presided. A young man named William Frank Dunn was charged with having kept a house of ill-fame at Seaford. Inspector Donovan, who appeared to prosecute, said accused occupied a week-end house on Point Nepean Road between Seaford and Carrum, and conducted it as a house of ill-fame. Plain Clothes Constable Sutton stated that he visited the house on Thursday morning, Sept 22, and when he asked accused, who was

in bed, what sort of a house he was keeping, he replied, “Its not a bad one.” Witness inspected a back room, and found a man in bed with two women, who were known to the Fitzroy police as common prostitutes. The place was in a filthy condition, beer bottles, cigarette butts etc, being scattered all over the room, whilst the bedclothes were in a disgusting state. The reputation of the place had reached the Fitzroy police, and witness added further testimony which disclosed a disgusting state of affairs, the females found in bed with the man being girls of 17 and 15 years of age, whilst a girl of 13 years had also been there. Constable McDonovan, who visited Dunn’s house with Constables Sutton and Roach, gave corroborative evidence. Accused elected to make a statement. He said that he usually worked “up country,” but was part owner, with his mother, of the house referred to. He declared that he invited the “ladies” down, but was not aware they were women of ill-repute. He admitted that he, and one of the girls, were suffering from a loathsome disease. The Chairman said the Bench would assist the police in ridding the district, of these undesirable characters, and accused would be fined the full penalty, £20; with £2 costs; in default, 3 months’ imprisonment. On the recommendation of Inspector Donovan, accused’s application for time to pay the fine was refused. *** Somerville Topics

THE sale of the property, “Julludur,” as reported last week was sold to Mr Gomm on account of the owner, Mrs E. V. Ternes, and not Mr Ternes, as was incorrectly reported. The Peninsula Co-Operative Fruitgrowers’ Association held a largely attended general meeting of shareholders on Monday evening last. In the absence of the Chairman of Directors, Mr S. W. M. West presided. Several important matters affecting the Association’s interests were discussed, and a scheme submitted for the purchase of the Packing Sheds both here and at Hastings. Mr S. S. Gault reports another successful fortnightly sale, when cows brought up to £11 10s and a pen of five breeding Rhode Island Red fowls realised over £2. *** Our Carrum Gazette Our football team accepted a challenge from the Fern Tree Gully Club to play a friendly game on the latter’s ground last Saturday. It was some time before they got away, but they intended to make speed en route. Fate was against them, as about half way they had a breakdown, which again delayed them for some time. However the Gully was reached about 4 o’clock and the game was soon started. The result was a win for our boys, who enjoyed the outing, and all arrived safely home. A good number journeyed to see the match, including Crs H. Rigby and W. Stephens. Chief Officer Marshall, of the Country Fire Brigades Board, has

now allotted to Carrum five firemen. Chelsea has nine, whilst at Aspendale there will be three. There seems to be some trouble about forming a cricket club here. Now that the football season is over it is to be hoped that a strong effort will be made to make a start. We have some good players and enthusiasts, and it would be a pity if they were to go to some other club. At last we are to have a policeman here. Word has been received from the Chief Commissioner that Mr Banner, who was here last year, has again been appointed. We are fortunate in having such a good man, as in the past he has always shown tact, and was very popular. A new business firm at Carrum Mr J. Robertson (hon. sec. of the Progress) and Cr W. Stephens. They are property and estate agents. They report that business is good, and the prospects for the season are bright. Carrum was visited during the week end by Mr R. A. Colenso. It is some time now since he has visited us. The doctor has advised him to take a long sea voyage, as his health has not been of the best. The hon. sec of the Progress has been instructed to write to Keast Park recreation committee, asking whether friendly sports are allowed to be played on the ground on Sundays. The bridge over the Patterson River has been damaged last week by military wagons, which passed over. The work was at once taken in hand, and all is now safe. *** From the pages of the Frankston and Somerville Standard, 30 September 1921