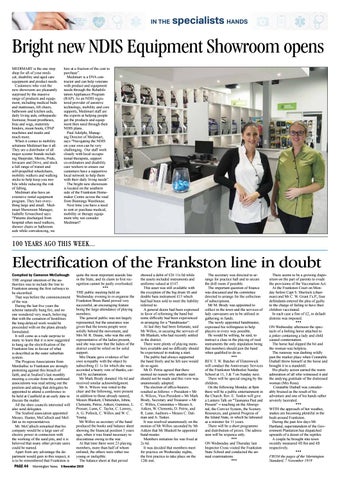 Rate your hearing at Nepean Hearing Bright new NDIS Equipment Showroom opens 4 Million Australians have a MEDIMART the oneHearing stop hearing loss.isNepean ishire at a fraction of the cost to purchase”. shop for all of your medioffering free hearing tests and Medimart is a DVA concal, disability and aged care rating your Hearing for Your Age tractor and can help veterans equipment and product needs. (for the overwho 40’s). with product and equipment Customers visit the new showroom pleasantlywho needs through the RehabiliThe number ofare Australians tation Appliances Program surprised by impaired the massive are hearing is increasing (RAP). As an NDIS regisrange of products and equipbecause of tered provider of assistive ment, including medical beds and mattresses, lift chairs, –we aretechnology, mobility and core • the Ageing Population supports, Medimart staff are bathroom and kitchen aids, living longer the experts at helping people daily living aids, orthopaedic • excessive Noise - in the workplace get the products and equipfootwear, breast prostheses, level music ment then need through their brasand andhigh wigs, maternity binders, Hearingmoon loss isboots, oftenCPAP described asNDIS plans. Paul Adolphi, Managmachines and masks and the ‘invisible disability’. People ing Director of Medimart, much more. often wait for 5-10 years before they says “Navigating the NDIS the way they can communicate and When it comes to mobility seek help. Hearing has lossitmay beyour own can be very solutions Medimart all. alsoon enjoy their lives. a contributing factor of in all the speedchallenging. Our staff work They are a distributor Nepean of onset of dementia. The degreeclosely of with localHearing occupa-is an independently major scooter brands includowned clinic and the audiologists are loss is also correlated to the risk of tional therapists, support ing Shoprider, Merits, Pride, University of Melbourne trained. Alzheimer’s disease. It stock is important co-ordinators and disability Invacare and Drive, and know about your hearing. care workers to ensure our atofull range of transit and For hearing screenings our main customers have a supportive self-propelled wheelchairs, office is located across the road from Many people ignore the signs of local network to help them mobility walkers and walking Hospital hearing loss,keep which include with theirFrankston daily living needs”.at 13 Hastings sticks to help you mo- turning Road, Frankston, phone: 9783 7520. the TV or stereo up so loud that The bright new showroom bile while reducing the risk others complain, frequently needing is locatedWe onare thealso southern of falling. located at: toMedimart ask others to have repeatanthemselves side of the Frankston Homealso and not being to hear properly 171 Camms Road, maker Centre across the roadCranbourne, extensive rentalable equipment from Bunnings program. They hireConstant every- ringing on the telephone. phone: Warehouse. 5966 1117, and you have a need Health thing large and small. Medis also another warning sign of Next time Hastings Community to rent or185 purchase medical, imart Showroom hearing loss. Manager, High Street Hastings, mobility phone: or therapy equipIsabelle Szwarcbord says 97837520. As technology advances, “Patients discharged from many ment why not consider Take advantage of the free hearing test people with loss benefit Medimart? hospital oftenhearing need walkers, offered by Nepean Hearing to ensure from hearing aids. These innovations shower chairs or bathroom your hearing is at its optimum. havewhile madeconvalescing, a positive difference in aids we

Free hearing Electrification of the FrankstonSay lineWhat?... in doubt tests to Senior during Seniors Week

Compiled by Cameron McCullough THE original intention of the authorities was to include the line to Frankston among the first railways to be electrified. That was before the commencement of the war. During the last five years the scheme naturally hung fire, and no one wondered very much, believing that with the cessation of hostilities the long-delayed work would be proceeded with on the plans already formulated. It will come as a rude surprise to many to learn that it is now suggested to hang up the electrification of the Frankston line in favour of what is described as the outer suburban system. The Progress Associations from Mordialloc to Frankston are strongly protesting against this breach of faith, and at Seaford’s last monthly meeting a circular from the combined associations was read setting out the position and asking that delegates be appointed to attend a conference to be held at Caulfield at an early date to discuss the matter. All the shire councils interested will also send delegates. The Seaford association appointed Messrs. Hunter, McCulloch and Moffatt as its representatives. Mr. McCulloch remarked that his company would be a large user of electric power in connection with the working of the sand pits, and it is believed that many other private users could be named. Apart from any advantage the department would gain in this respect, it is to be remembered that Frankston is

quite the most important seaside line in the State, and its claim to first recognition cannot be justly overlooked. *** THE public meeting held on Wednesday evening to re-organise the Frankston Brass Band proved very successful, an encouraging feature being the large attendance of playing members. The general public was not largely represented, but the assurance was given that the towns people were solidly behind the movement, and Mrs M. R. Deane, who was the only representative of the ladies present, said she was sure that the ladies of the district could be relied on for solid support. Mrs Deane gave evidence of her own sympathy with the object by subscribing £1 1s for which she was accorded a hearty vote of thanks, carried by acclamation. Mr Mark Brody donated 10s 6d and received similar acknowledgment. Mr A. Wilcox was voted to the chair and the following, were present in addition to those already named, Messrs Blaskett, Chittenden, Johns, Clements, Petrie, Aitken, Gummes, L. Prosser, Lunn, C. Taylor, C. Lawrey, A. G. Pollock, C. Willox and W. C. Young. Mr Willox as secretary of the band produced the books and balance sheet showing the financial position 5 years ago, when it was found necessary to discontinue owing to the war. At that time there were 23 playing members, more than half of whom enlisted; the others were either too young or ineligible. The balance sheet at that period

showed a debit of £26 11s 0d while the assets included instruments and uniforms valued at £147. This asset was still available with the exception of the big drum £6 and double bass instrument £15 which had bad been sold to meet the liability referred to. A general desire had been expressed in favor of reforming the band but some difficulty had been experienced in arranging for a “bandmaster”. At last they had been fortunate, said Mr Willox, in securing the services of Mr Blaskett, who had recently settled in the district. There were plenty of playing members available and no difficulty should be experienced in making a start. The public had always supported the band freely and he felt sure would do so again. Mr D. Petrie agreed that there seemed no reason why another start should not be made and this view was unanimously adopted. The election of office-bearers resulted as follows: – President – Mr A. Wilcox, Vice-President – Mr Mark Brody, Secretary and Treasurer – Mr C. Willox, Committee – Messrs A. Aitken, W. Clements, D. Petrie, and R. Lunn. Auditors – Messrs C. Dalman and A. Tasker. It was resolved unanimously on the motion of Mr Willox seconded by Mr Aitken that Mr Blaskett be appointed band-master. Members initiation fee was fixed at 2s 6d. It was decided that members meet for practice on Wednesday nights, the first practice to take place on the 12th inst.

The secretary was directed to arThere seems to be a growing disporange for practice hall and to secure sition on the part of parents to evade the drill room if possible. the provisions of Products the Vaccination Act. Personalised Service, Personalised The important question of finance At the Frankston Court on Monwas discussed and the committee before Capt S. Sherlock (chairDid you know manyday audiologists are directed to arrange for thethat collection man) and Mr C. W. Grant J’s.P., four of subscriptions. defendants entered the plea of guilty not independent, and relyto on commissions Mr M. Brody was appointed to the charge of failing to have their from only one collect in the town and the services of supplier? children vaccinated. lady canvassers are to be utilised in In each case a fine of £2, in default gathering in funds. distress was imposed. Atnewly Nepean Hearing, we are proud The appointed bandmaster, *** to expressed his willingness to help ON Wednesday afternoon be able to offer the latest technical the specplayers in every way possible. tacle of a bolting horse attached to innovations from regardless He would be willing, he said,the to industry, a jinker containing a lady and child instruct a class in the playing of reed caused consternation. ofstipulation the manufacturer. instruments the only being The horse had slipped the bit and that members should join the band the woman was helpless. when qualified to do so. runaway was dashing wildly We offer personalisedThe service and *** past the market place when Constable personalised products. Call today and REV. T. W. Butcher of Elsternwick Diaballus threw himself at the horse and will conduct the Anniversary Services brought it to a standstill. book your free hearing assessment and of the Frankston Methodist Sunday His plucky action earned the warm School at 11, 3 & 7 on Sunday next. admiration of all who witnessed it and make sure you’re getting the right device. There will be special singing by the the undying gratitude of the distressed children. woman (Mrs Ross). On the following Monday at 8pm Constable Diaball was considerthere will be a public entertainment in ably bruised as the result of his the Church. Rev. E. Tonkin will give adventure and one of his hands rather a Lantern Talk on “Tasmania Past and severely lacerated. Present” – touching on the Aborigi*** nal, the Convict System, the Scenery WITH the approach of hot weather, Resources, and general Progress of snakes are becoming plentiful in the the Island State, in which he laboured bush around Frankston. as a minister for 11 years. During the past few days Mr There will be a short programme Hartland, superintendent of the Govand distribution of prizes. The admisernment Plantation has dispatched sion will be sixpence only. upwards of a dozen of the reptiles. *** A couple he brought into town ON Wednesday and Thursday last recently measured 4ft 8in and 4ft Inspector Cross visited the Frankston respectively. State School and conducted the an*** nual examinations. FROM the pages of the Mornington *** Standard, 7 November 1919

During Seniors Week 15% discount on our hearing aid for self funded retirees.

to help” “Hear to help