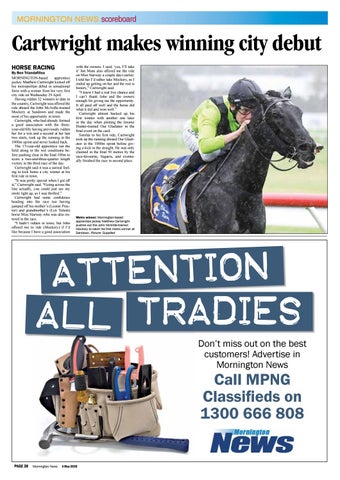 By Ben Triandafillou MORNINGTON-based apprentice jockey Matthew Cartwright kicked off his metropolitan debut in sensational form with a winner from his very first city ride on Wednesday 29 April. Having ridden 32 winners to date in the country, Cartwright was offered the ride aboard the John McArdle-trained Mockery at Sandown and made the most of his opportunity in town. Cartwright, who had already formed a good association with the threeyear-old filly having previously ridden her for a win and a second at her last two starts, took up the running in the 1000m sprint and never looked back. The 17-year-old apprentice ran the field along in the wet conditions before pushing clear in the final 100m to score a two-and-three-quarter length victory in the third race of the day. Cartwright said it was a surreal feeling to kick home a city winner at his first ride in town. “It was pretty special when I got off it,” Cartwright said. “Going across the line actually, you could just see my smile light up, so I was thrilled.” Cartwright had some confidence heading into the race too having jumped off his mother’s (Leonie Proctor) and grandmother’s (Lyn Tolson) horse Miss Starway who was also entered in the race. “I hadn’t ridden in town, but John offered me to ride (Mockery) if I’d like because I have a good association

with the owners. I said, ‘yes, I’ll take it’ but Mum also offered me the ride on Miss Starway a couple days earlier. I told her I’d rather take Mockery, so I ended up getting on her and the rest is history,” Cartwright said. “I knew I had a real live chance and I can’t thank John and the owners enough for giving me the opportunity. It all paid off well and the horse did what it did and won well.” Cartwright almost backed up his first winner with another one later in the day when piloting the Jerome Hunter-trained Our Gladiator in the final event on the card. Similar to his first ride, Cartwright took up the running aboard Our Gladiator in the 1000m sprint before giving a kick in the straight. He was only claimed in the final 50 metres by the race-favourite, Sagarra, and eventually finished the race in second place.