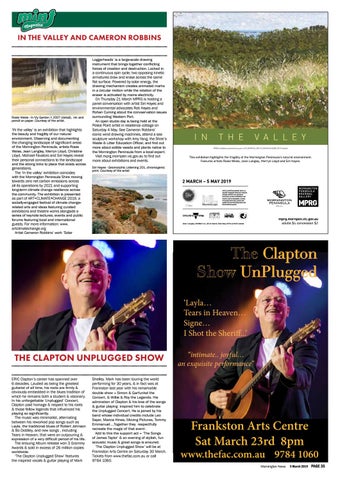 IN THE VALLEY AND CAMERON ROBBINS

Rosie Weiss - In My Garden X 2007 (detail), ink and pencil on paper. Courtesy of the artist.

‘IN the valley’ is an exhibition that highlights the beauty and fragility of our natural environment. Observing and documenting the changing landscape of significant areas of the Mornington Peninsula, artists Rosie Weiss, Jean Langley, Merryn Lloyd, Christine Lloyd, Michael Favaloro and Siri Hayes reveal their personal connections to the landscape and the strong links to place that exists across generations. The ‘In the valley’ exhibition coincides with the Mornington Peninsula Shire moving towards zero net carbon emissions across all its operations by 2021 and supporting long-term climate change resilience across the community. The exhibition is presented as part of ART+CLIMATE=CHANGE 2019, a socially-engaged festival of climate changerelated arts and ideas featuring curated exhibitions and theatre works alongside a series of keynote lectures, events and public forums featuring local and international guests. For more information: www. artclimatechange.org Artist Cameron Robbins’ work ‘Solar

Loggerheads’ is a large-scale drawing instrument that brings together conflicting forces of creation and destruction. Locked in a continuous spin cycle, two opposing kinetic armatures draw and erase across the same flat surface. Powered by solar energy, the drawing mechanism creates animated marks in a circular motion while the rotation of the eraser is activated by mains electricity. On Thursday 21 March MPRG is hosting a panel conversation with artist Siri Hayes and environmental advocates Rob Hayes and Rohan Cuming about the convservation issues surrounding Western Port. An open studio day is being held at the Police Point artist in residence cottage on Saturday 4 May. See Cameron Robbins’ iconic wind drawing machines, attend a sea sculpture workshop with Amy Yang, the Shire’s Waste &amp; Litter Education Officer, and find out more about edible weeds and plants native to the Mornington Peninsula from a local expert. Visit mprg.mornpen.vic.gov.au to find out more about exhibitions and events.

2 MARCH – 5 MAY 2019 ART+CLIMATE=CHANGE 2019 is a socially-engaged festival of climate change related arts and ideas featuring curated exhibitions and theatre works alongside a series of keynote lectures, events and public forums featuring local and international guests.

Jean Langley, Untitled n.d., oil on board, Courtesy of the artist’s estate

The Clapton Show UnPlugged ‘Layla… Tears in Heaven… Signe… I Shot the Sheriff...’

THE CLAPTON UNPLUGGED SHOW ERIC Clapton’s career has spanned over 6 decades. Lauded as being the greatest guitarist of all time, his roots are firmly &amp; obviously embedded in the blues tradition of which he remains both a student &amp; visionary. In his unforgettable ‘Unplugged’ Concert, Clapton paid homage &amp; respect to his roots &amp; those fellow legends that influenced his playing so significantly. The music was minimalist, alternating between his reworked pop songs such as Layla, the traditional blues of Robert Johnson &amp; Bo Diddley, and new songs , including Tears in Heaven, that were an outpouring &amp; expression of a very difficult period of his life. The ensuing Album release won 3 Grammy Awards &amp; sold in excess of 26 million copies worldwide. ‘The Clapton Unplugged Show’ features the inspired vocals &amp; guitar playing of Mark

Shelley. Mark has been touring the world performing for 30 years, &amp; in fact was at Frankston last year with his remarkable double show – Simon &amp; Garfunkel the Concert, &amp; Willie &amp; Roy the Legends. His admiration of Clapton &amp; his love of the songs &amp; guitar playing inspired him to celebrate the Unplugged Concert. He is joined by his band whose individual credits include Leo Sayer, Marcia Hines, Moving Pictures, Tommy Emmanuel….Together they respectfully recreate the magic of that event . Add to this the support act – ‘The Songs of James Taylor’ &amp; an evening of stylish, fun acoustic music &amp; great songs is ensured. ‘The Clapton Unplugged Show’ will be at Frankston Arts Centre on Saturday 30 March. Tickets from www.thefac.com.au or call 9784 1060.