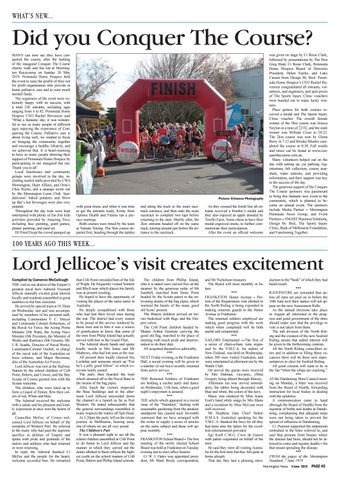 Did you Conquer The Course? MANY can now say they have conquered the course, after the holding of the inaugural Conquer The Course charity walk and fun run at Mornington Racecourse on Sunday 26 May 2019. Peninsula Home Hospice held the event to raise the profile of their not for profit organisation who provide in home palliative care and to raise much needed funds. The organisers of the event were extremely happy with its success, with a total 226 entrants, including ages ranging from 4 to 82. Peninsula Home Hospice CEO Rachel Bovenizer said ‘What a fantastic day, it was wonderful to see so many people of different ages enjoying the experience of Conquering the Course. Palliative care is about living well, we wanted to focus on bringing the community together and encourage a healthy lifestyle, and we achieved that. It is heart-warming to have so many people showing their support of Peninsula Home Hospice by participating in our inaugural fun run. Thank you to all’. Local businesses and community groups were involved in the day, including market stalls provided by CWA Mornington, Heart Affairs, and Orna’s Choc Rocks, and a sausage sizzle run by the Mornington Lions Club. Spudalicious’ baked potatoes and Brew up Bar’s hot beverages were also very popular. Throughout the day kids were kept entertained with plenty of fun free kids activities provided by Amazing Toys, including face painting, giant games, plaster painting, and sand art. DJ PeterD kept the crowd pumped up

with great music and when it was time to get the entrants ready, Kristy from Optima Health and Fitness ran a prerace warmup. Both courses were timed by the team at Tomato Timing. The 5km course departed first, heading through the stables

As they crossed the finish line all entrants received a finisher’s medal and they also enjoyed an apple donated by Torello Farm. Some chose to have their medal engraved onsite, to further commemorate their participation. After the event an official welcome

was given on stage by Cr Rosie Clark, followed by presentations by The Hon Greg Hunt, Cr Rosie Clark, Peninsula Home Hospice Board of Directors President, Helen Fairlie, and Luke Carson from Design By Bird. Peninsula Home Hospice’s CEO Rachel Bovenizer congratulated all entrants, volunteers, and organisers, and spot prizes of The Sports Injury Clinic vouchers were handed out to many lucky winners. Place getters for both courses received a medal and The Sports Injury Clinic voucher. The overall female winner of the 5km course was Jessica Neylon in a time of 22:02, and the male winner was William Cross in 20:23. The 2km course was won by Glenn Berry in 7:52 and Brooke Rhodes completed the course in 8:38. Full results and times can be found at www.conquerthecourse.com.au. Many volunteers helped out on the day with setting up, car parking, registrations, bib collection, course marshals, water stations, and providing information, and their support was key to the success of the day. The generous support of the Conquer The Course sponsors was paramount to bring this fantastic new event to the community, which is planned to become an annual event. The sponsors include Media Partner – Mornington Peninsula News Group, and Event Partners – SMART Business Solutions, Design By Bird, The Sports Injury Clinic, Bank of Melbourne Foundation, and Functioning Together.

Lord Jellicoe’s visit creates excitement Compiled by Cameron McCullough THE visit to our district of the Empire’s greatest naval hero Admiral Viscount Jellicoe naturally excited great interest locally and residents assembled in great numbers to bid him welcome. He arrived by special train at 10.50am on Wednesday last and was accompanied by members of his personal staff, including Commodore F. C. Dreyer and Lieutenant Colonel Robertson, of the Royal Air Force; the Acting Prime Minister (Mr Watt), the Acting Navy Minister (Mr Poynton), the Minister of Works and Railways (Mr Groom), Mr. J. R. Seattle, Director of Naval Works; Lieutenant–Colonel Goebel, in charge of the naval side of the Australian air force scheme, and Major Berriman, also of the Australian Air Forces. Lord Jellicoe was met at the Railway Station by the school children of Crib Point, Bittern, and Cowes, and the Boy Scouts of Cowes greeted him with the Scouts welcome. The children, who were lined up to form a Guard of Honor, flew their colors of red, White and blue. The Admiral received the welcome with a salute and his pleasant and kindly expression at once won the hearts of all. Councillor McFee, of Cowes welcomed Lord Jellicoe on behalf of the residents of Western Port. He referred to the many who had paid the supreme sacrifice in defence of Empire and spoke with pride and gratitude of the sailors and soldiers who had returned or were returning. In reply the Admiral thanked Cr McFee and the people for the hearty welcome accorded him. He remarked

that Crib Point reminded him of the Isle of Wight. He frequently visited Ventnor and Rhyll near which places his family was at present residing. He hoped to have the opportunity of visiting the places of the same name in Australia. He deeply sympathised with those who had lost their loved ones during the war. The district had every reason to be proud of the service rendered by those men and to him it was a source of gratification to know that some of the men from Philip Island had actually served with him in the Grand Fleet. The Admiral shook hands and spoke kindly words to Mrs Justie and Mr Mathews, who had lost sons at the war. All present then loudly cheered His Lordship and someone struck up “For he’s a jolly good fellow” in which everyone lustily joined. The party then boarded the train which steamed off to the Naval Base to the strains of the bag pipes. After lunch the visitors inspected the Base buildings and in the afternoon Lord Jellicoe proceeded down the channel in a launch as far as Port Western. He stated subsequently that the general surroundings resembled in many respects the waters off Spit Head. At 3.20pm the party left on the return journey to Melbourne, bearing away one of whom we are all very proud. The Children’s Part It was a pleasant sight to see all the school children assembled at Crib Point to do honor to Lord Jellicoe and the manner in which they carried out the duties allotted to them reflects the highest credit on the school masters of Crib Point, Bittern and Phillip Island schools.

The children from Phillip Island, who it is stated were carried free on the steamer by the generous order of Mr Sambell, marched from Stony Point headed by the Scouts patrol to the enlivening strains of the bag pipes, which warmed the hearts of the many good old Scots’ present. The Bittern children arrived on lorries bedecked with flags and the Empire colors. The Crib Point children headed by Master Arthur Emmine carrying the good old flag, marched to the place of meeting with much pride and determination to do their duty. All acquitted themselves admirably. *** NEXT Friday evening, in the Frankston Hall, a social evening will be given to a number of our boys recently returned from active service. *** THE Returned Soldiers of Frankston are holding a euchre party and dance on Wednesday, 11th June, when a good night’s enjoyment is assured. *** THE article which appeared in a recent issue of the “Standard,” dealing with seasonable gardening from the amateur standpoint has caused such favorable comment that we have arranged with the writer to supply a series of articles on the same subject and these will appear monthly. *** FRANKSTON School Board – The first meeting of the newly elected School Board was held at Frankston on Tuesday evening last to elect office bearers. Cr W. J. Oates was appointed president, Mr Mark Brody correspondent,

and Mr Nicholson treasurer. The Board will meet monthly in future. *** FRANKSTON Honor Avenue – Portion of the Repatriation vote allotted to the North Riding is being expended in making concrete guards to the Honor Avenue in Frankston. The returned soldiers employed are making good progress with the work which when completed will be both useful and ornamental. *** SAILORS Entertained —The first of a series of chars-a-banc runs organised by the Y.M.C.A. for sailors of New Zealand, was held on Wednesday, when 200 men visited Frankston, and were entertained at afternoon tea by the Wattle Club. On arrival the guests were received by Mrs Dalman, vice-pres., (Miss Gregory being absent through illness). Afternoon tea was served immediately, the tables being decorated with blue and white, the colors of the navy. Music was rendered by Miss Jessie Ford’s band while songs by Mrs Mann and a recitation by Miss McLean were well received. Mr Stephens (late Chief Stoker H.M.A.S. Australia) speaking for the Y.M.C.A. thanked the boys for all they had done also the ladies for the excellent entertainment provided. Sgt. Knill C.M.G. Croix de Guerre with palms responded on behalf of the men. He said they were all visiting Australia for the first time but they felt quite at home already. That day they had a pleasing intro-

duction to the “bush” of which they had heard much. *** RATEPAYERS are reminded that unless all rates are paid on or before the 10th June next their names will not appear on the new Assessment Rolls. As the annual elections take place in August all interested in the progress and good government of the shire should make sure that the privilege to vote is not taken from them. The sub division of the North Riding and the creation of the new Seaford Riding means that added interest will be given to the forthcoming contests. All the North Riding councillors retire and in addition to filling these vacancies there will be three new representatives to elect for Seaford Riding. All good citizens will want to be in the fun “when the whips are cracking.” *** AT the Dandenong Shire Council meeting on Monday, a letter was received from the Board of Health, forwarding instruction for local bodies in dealing with the epidemic. A communication came to hand (through the Board of Health) from the registrar of births and deaths at Dandenong, complaining that adequate steps were not being taken to prevent the spread of influenza in Dandenong. Cr. Pearson supported the statements embodied in the letter referred to, and said that persons from houses where the disease had been, should not be allowed to come and register deaths – for that meant spreading the disease. *** FROM the pages of the Mornington Standard, 7 June 1919