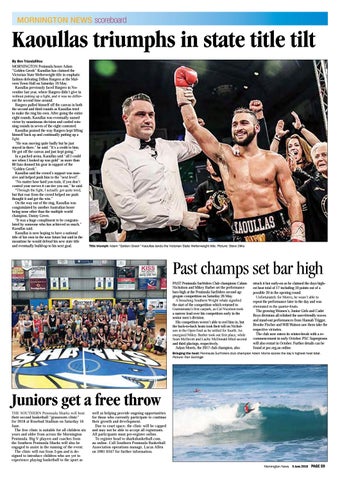 Kaoullas triumphs in state title tilt By Ben Triandafillou MORNINGTON Peninsula boxer Adam “Golden Greek” Kaoullas has claimed the Victorian State Welterweight title in emphatic fashion defeating Dillon Bargero at the Malvern Town Hall on Saturday 19 May. Kaoullas previously faced Bargero in November last year, where Bargero didn’t give in without putting up a fight, and it was no different the second time around. Bargero pulled himself off the canvas in both the second and third rounds as Kaoullas tried to make the ring his own. After going the entire eight rounds, Kaoullas was eventually named victor by unanimous decision and carded winning rounds in seven of the eight contested. Kaoullas praised the way Bargero kept lifting himself back up and continually putting up a fight. “He was moving quite badly but he just stayed in there,” he said. “It’s a credit to him. He got off the canvas and just kept going.” In a packed arena, Kaoullas said “all I could see when I looked up was gold” as more than 80 fans donned his gear in support of the “Golden Greek”. Kaoullas said the crowd’s support was massive and helped push him to the “next level”. “No matter how hard you train, if you don’t control your nerves it can tire you out,” he said. “Through the fight, I actually got quite tired, but that roar from the crowd helped me push thought it and get the win.” On the way out of the ring, Kaoullas was congratulated by another Australian boxer being none other than the multiple world champion, Danny Green. “It was a huge compliment to be congratulated by someone who has achieved so much,” Kaoullas said. Kaoullas is now hoping to have a national title of his own in the near future but said in the meantime he would defend his new state title and eventually build-up to his next goal.

Past champs set bar high PAST Peninsula Surfriders Club champions Calum Nicholson and Mikey Barber set the performance bars high at the Peninsula Surfriders second aggregate competition on Saturday 26 May. A breaching Southern Wright whale signified the start of the competition which returned to Gunnamatta’s first carpark, as Cal Nicolson took a narrow lead over his competitors early in the senior men’s division. His competitors weren’t able to reel him in, but the back-to-back heats took their toll on Nicholson in the Open final as he settled for fourth. An energised Mikey Barber took out first place, while Sean McDevitt and Lachy McDonald filled second and third placings, respectively. Adam Morris, the 2017 club champion, also

struck it hot early-on as he claimed the days highest heat total of 17 including 10 points out of a possible 20 in the opening round. Unfortunately for Morris, he wasn’t able to repeat the performance later in the day and was eliminated in the quarter-finals. The growing Women’s, Junior Girls and Cadet Boys divisions all relished the user-friendly waves and stand-out performances from Hannah Trigger, Brooke Fischer and Will Watson saw them take the respective victories. The club now enters its winter-break with a recommencement in early October. PSC Supergroms will also restart in October. Further details can be found at psc.org.au online.

Juniors get a free throw THE SOUTHERN Peninsula Sharks will host their second basketball “grassroots clinic” for 2018 at Rosebud Stadium on Saturday 16 June. The free clinic is suitable for all children six years and older from across the Mornington Peninsula. Big V players and coaches from the Southern Peninsula Sharks will also be engaged to assist in the running of the event. The clinic will run from 2-pm and is designed to introduce children who are yet to experience playing basketball to the sport as

well as helping provide ongoing opportunities for those who currently participate to continue their growth and development. Due to court space, the clinic will be capped and may not be able to accept all registrants. All participants must pre-register online. To register head to sharksbasketball.com. au online. Call Southern Peninsula Basketball Association operations manage, Lucas Allen on 5981 0347 for further information.