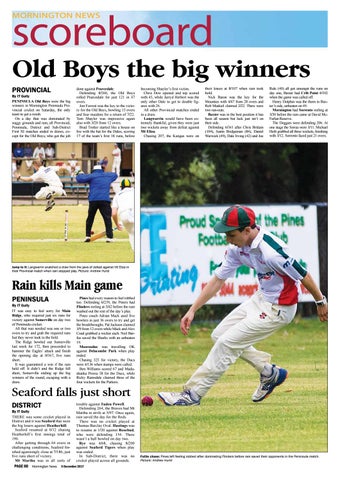 By IT Gully PENINSULA Old Boys were the big winners in Mornington Peninsula Provincial cricket on Saturday, the only team to get a result. On a day that was dominated by soggy grounds and rain, all Provincial, Peninsula, District and Sub-District First XI matches ended in draws, except for the Old Boys, who got the job

done against Pearcedale. Defending 8/260, the Old Boys rolled Pearcedale for just 121 in 47 overs. Jon Forrest was the key to the victory for the Old Boys, bowling 15 overs and four maidens for a return of 7/22. Tom Shayler was impressive again also with 3/20 from 12 overs. Brad Trotter started like a house on fire with the bat for the Dales, scoring 17 of the team’s first 18 runs, before

becoming Shayler’s first victim. Chris Dew opened and top scored with 45, while Jarryd Herbert was the only other Dale to get to double figures with 26. All other Provincial matches ended in a draw. Langwarrin would have been extremely thankful, given they were just two wickets away from defeat against Mt Eliza. Chasing 207, the Kangas were on

Rule (40) all got amongst the runs on day one, Baxter had Crib Point 4/102 when the game was called off. Henry Dolphin was the thorn in Baxter’s side, unbeaten on 49. Mornington had Sorrento reeling at 3/30 before the rain came at David McFarlan Reserve. The Doggies were defending 206. At one stage the Sorras were 3/11. Michael Heib grabbed all three wickets, finishing with 3/12. Sorrento faced just 21 overs.

Jump to it: Langwarrin snatched a draw from the jaws of defeat against Mt Eliza in their Provincial match when rain stopped play. Picture: Andrew Hurst

By IT Gully IT was easy to feel sorry for Main Ridge, who required just six runs for victory against Somerville on day two of Peninsula cricket. All that was needed was one or two overs to try and grab the required runs but they never took to the field. The Ridge bowled out Somerville last week for 172, then proceeded to hammer the Eagles’ attack and finish the opening day at 0/167, five runs short. It was guaranteed a win if the rain held off. It didn’t and the Ridge fell short, Somerville ending up the big winners of the round, escaping with a draw.

Pines had every reason to feel robbed too. Defending 6/259, the Piners had Flinders reeling at 5/42 before the rain washed out the rest of the day’s play. Pines coach Adrian Mack used five bowlers in just 36 overs to try and get the breakthroughs. Pat Jackson claimed 3/9 from 12 overs while Mack and Alex Coad grabbed a wicket each. Neil Barfus saved the Sharks with an unbeaten 19. Moorooduc was travelling OK against Delacombe Park when play ended. Chasing 325 for victory, the Ducs were 4/136 when stumps were called. Ben Williams scored 67 and Madushanka Perera 58 for the Ducs, while Ricky Ramsdale claimed three of the four wickets for the Parkers.

By IT Gully THERE was some cricket played in District and it was Seaford that were the big losers against Heatherhill. Seaford resumed at 0/12 chasing Heatherhill’s first innings total of 190. After getting through 64 overs in challenging conditions, Seaford finished agonisingly close at 7/186, just five runs short of victory. Mt Martha was in all sorts of

trouble against Baden Powell. Defending 264, the Braves had Mt Martha in strife at 5/97. Once again, rain saved the day for the Reds. There was no cricket played at Thomas Barclay Oval. Hastings was to resume at 1/20 against Rosebud, who were defending 154. There wasn’t a ball bowled on day two. Rye was 4/68, chasing 8/200 against Seaford Tigers when play was ended. In Sub-District, there was no cricket played across all grounds.