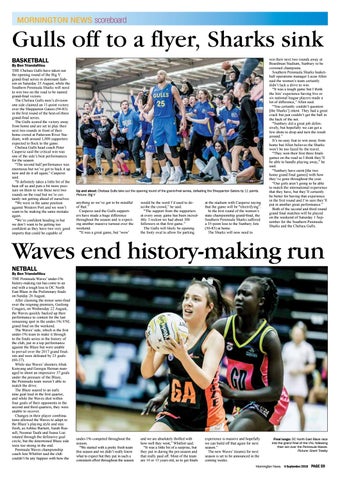 Gulls off to a flyer, Sharks sink BASKETBALL

By Ben Triandafillou THE Chelsea Gulls have taken out the opening round of the Big V grand-final series in dominant fashion on Saturday 25 August, while the Southern Peninsula Sharks will need to win two on the road to be named grand-final victors. The Chelsea Gulls men’s division one side claimed an 11-point victory over the Shepparton Gators (94-83) in the first round of the best-of-three grand-final series. The Gulls scored the victory away from home and are set to play their next two rounds in front of their home crowd at Patterson River Stadium, with around 1,000 supporters expected to flock to the game. Chelsea Gulls head coach Peter Caspersz said the critical win was one of the side’s best performances for the season. “The second half performance was enormous but we’ve got to back it up now and do it all again,” Caspersz said. “It definitely takes a little bit of the heat off us and puts a bit more pressure on them to win these next two rounds on the road but we’re certainly not getting ahead of ourselves. “We were in the same position against Western Port and we won’t want to be making the same mistake again. “We’re confident heading in but we don’t want to be getting too confident as they have two very good imports that could be capable of

Up and about: Chelsea Gulls take out the opening round of the grand-final series, defeating the Shepparton Gators by 11 points. Picture: Big V

anything so we’ve got to be mindful of that.” Caspersz said the Gulls supporters have made a huge difference throughout the season and is expecting another massive turnout over the weekend. “It was a great game, but ‘wow’

would be the word I’d used to describe the crowd,” he said. “The support from the supporters at every away game has been incredible. I reckon we had about 300 followers in that first game.” The Gulls will likely be opening the footy oval to allow for parking

at the stadium with Caspersz saying that the game will be “electrifying”. In the first round of the women’s state championship grand-final, the Southern Peninsula Sharks suffered a 35-point loss to the Sunbury Jets (50-85) at home. The Sharks will now need to

win their next two rounds away at Boardman Stadium, Sunbury to be crowned champions. Southern Peninsula Sharks basketball operations manager Lucas Allen said the women’s team certainly didn’t lack a drive to win. “It was a tough game but I think the Jets’ experience having five or six national league players made a lot of difference,” Allen said. “You certainly couldn’t question [the Sharks’] intent. They had a great crack but just couldn’t get the ball in the back of the net. “Sunbury did a great job defensively, but hopefully we can get a few shots to drop and turn the result around.” It’s no easy feat to win away from home but Allen believes the Sharks won’t be too fazed by the travel. “They won their first three finals games on the road so I think they’ll be able to handle playing away,” he said. “Sunbury have earnt [the two home grand final games] with how they’ve gone throughout the year. “Our girls aren’t going to be able to match the international experience that they have, but they’ll certainly be better for having that experience in the first round and I’m sure they’ll put in another great performance.” Both of the second and third round grand final matches will be played on the weekend of Saturday 1 September for the Southern Peninsula Sharks and the Chelsea Gulls.

By Ben Triandafillou THE Peninsula Waves’ under-19s history-making run has come to an end with a tough loss to DC North East Blaze in the Preliminary finals on Sunday 26 August. After claiming the minor semi-final over the reigning premiers, Geelong Cougars, on Wednesday 22 August, the Waves quickly backed up their performance to contest for the last remaining spot in the under-19s VNL grand final on the weekend. The Waves’ side, which is the first under-19s team to make it through to the finals series in the history of the club, put in a top performance against the Blaze but were unable to prevail over the 2017 grand finalists and were defeated by 23 goals (60-37). While star Waves’ shooters Abuk Kenyang and Georgia Hernan managed to shoot an impressive 37 goals under the pressure of the Blaze, the Peninsula team weren’t able to match the drive. The Blaze soared to an early nine goal lead in the first quarter, and while the Waves shot within four goals of their opponents in the second and third quarters, they were unable to recover. Changes in their player combinations allowed the Waves to adapt to the Blaze’s playing style and stay fresh, as Ashlee Barnett, Sarah Russell, Neomai Taufa and Sussu Liai rotated through the defensive goal circle, but the determined Blaze side were too strong in the end. Peninsula Waves championship coach Jess Whitfort said the club couldn’t be any happier with how the

and we are absolutely thrilled with how well they went,” Whitfort said. “It was a little bit of a surprise, but they put in during the pre-season and that really paid off. Most of the team are 14 or 15 years old, so to get finals

experience is massive and hopefully we can build off that again for next season.” The new Waves’ (teams) for next season is set to be announced in the coming weeks.