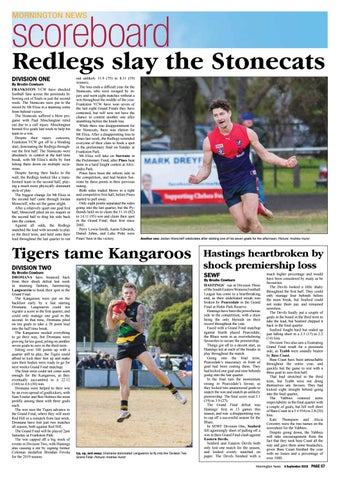 Redlegs slay the Stonecats DIVISION ONE

By Brodie Cowburn FRANKSTON YCW have shocked football fans across the peninsula by bowing out of finals in just the second week. The Stonecats were put to the sword by Mt Eliza in a stunning come from behind victory. The Stonecats suffered a blow pregame with Paul Minchington ruled out due to a calf injury. Minchington booted five goals last week to help his team to a win. Despite their injury concerns, Frankston YCW got off to a blinding start, dominating the Redlegs throughout the first half. The Stonecats were absolutely in control at the half time break, with Mt Eliza’s skills by foot letting them down on multiple occasions. Despite having their backs to the wall, the Redlegs looked like a transformed team in the second half, playing a much more physically dominant style of play. The biggest change for Mt Eliza in the second half came through Jordan Moncrieff, who set the game alight. After a relatively quiet one goal first half, Moncrieff piled on six majors in the second half to drag his side back into the contest. Against all odds, the Redlegs snatched the lead with seconds to play in the third term, and held onto their lead throughout the last quarter to run

out unlikely 11.9 (75) to 8.11 (59) winners. The loss ends a difficult year for the Stonecats, who were ravaged by injury and went eight matches without a win throughout the middle of the year. Frankston YCW have won seven of the last eight Grand Finals they have contested, but will now not have the chance to contest another one after stumbling before the finish line. While there was disappointment for the Stonecats, there was elation for Mt Eliza. After a disappointing loss to Pines last week, the Redlegs reminded everyone of their class to book a spot in the preliminary final on Sunday at Frankston Park. Mt Eliza will take on Sorrento in the Preliminary Final, after Pines beat them in a hard fought contest at Alexandra Park. Pines have been the inform side in the competition, and had beaten Sorrento by three points in their previous outing. Both sides traded blows in a tight and competitive first half, before Pines started to pull away. Only eight points separated the sides going into the last quarter, but the Pythonds held on to claim the 11.16 (82) to 14.11 (95) win and claim their spot in the Grand Final, their first since 2002. Perry Lewis-Smith, Aaron Edwards, Daniel Johns, and Luke Potts were Pines’ best in the victory.

Another one: Jordan Moncrieff celebrates after slotting one of his seven goals for the afternoon. Picture: Andrew Hurst

By Brodie Cowburn DROMANA have bounced back from their shock defeat last week in stunning fashion, hammering Langwarrin to book their spot in the Grand Final. The Kangaroos were put on the backfoot early by a fast starting Dromana. Langwarrin could not register a score in the first quarter, and could only manage one goal in the second. In that time, Dromana piled on ten goals to take a 58 point lead into the half time break. The Kangaroos needed everything to go their way, but Dromana were proving far too good, piling on another seven goals to zero in the third term. Sitting over 100 points up with a quarter still to play, the Tigers could afford to kick their feet up and make sure their bodies were ready to go for next weeks Grand Final matchup. The final siren could not come soon enough for the Kangaroos, as they eventually succumbed to a 22.12 (144) to 4.6 (30) win. Dromana were helped to their win by an even spread of goalkickers, with Sam Fowler and Ben Holmes the most prolific among them with three goals each. The win sees the Tigers advance to the Grand Final, where they will meet Red Hill in a rematch from last week. Dromana have lost just two matches all season, both against Red Hill. The Grand Final will be played 2pm Saturday at Frankston Park. The win capped off a big week of events in Division Two, with Hastings also causing a stir by signing former Coleman medallist Brendan Fevola for the 2019 season.

Up, up, and away: Dromana dominated Langwarrin to fly into the Division Two Grand Final. Picture: Andrew Hurst

By Brodie Cowburn HASTINGS’ run in Division Three of the South Eastern Womens Football League has come to a heartbreaking end, as their undefeated streak was broken by Pearcedale in the Grand Final at Holm Park Reserve. Hastings have been the powerhouse side in the competition, with a draw being the only blemish on their record throughout the year. Faced with a Grand Final matchup against fourth placed Pearcedale, the Blues went in as overwhelming favourites to secure the premiership. Things got off to a decent start, as Hastings led at each of the breaks in play throughout the match. Going into the final term, Pearcedale’s inaccuracy in front of goal had been costing them. They had kicked one goal and nine behinds going into the last quarter. In the final turn the momentum swung in Pearcedale’s favour, as they kicked two unanswered goals to snatch the win and snatch an unlikely premiership. The final score read 3.1 (19) to 3.9 (27). The Grand Final defeat was Hastings’ first in 15 games this season, and was a disappointing way to cap off a successful season for the Blues. In SEWF Division One, Seaford fell agonisingly short of pulling off a win in their Grand Final clash against Eastern Devils. Seaford and Eastern Devils both only lost one match for the season, and looked evenly matched on paper. The Devils finished with a

much higher percentage and would have been considered by many as he favourites. The Devils looked a little shaky throughout the first half. They could only manage four behinds before the main break, but Seaford could not make them pay and remained scoreless. The Devils finally put a couple of goals in the board in the third term to take the lead, but Seaford chipped it back in the final quarter. Seaford fought hard but ended up just falling short in a 2.5 (17) to 2.2 (14) loss. Division Two also saw a frustrating Grand Final result for a peninsula side, as Tyabb were soundly beaten by Bass Coast. Bass Coast have been untouchable throughout the entire year, and quickly but the game to rest with a three goal to zero first half. That lead stretched in the third term, but Tyabb were not doing themselves any favours. They had kicked eight straight behind going into the final quarter, The Yabbies restored some respectability in the final quarter with a couple of goals, but fell well short of Bass Coast in a 5.4 934) to 2.8 (20) loss. Kate Thompson and Alicia Coventry were the two names on the scoresheet for the Yabbies. Despite going down, the Yabbies will take encouragement from the fact that they took bass Coast all the way and gave them some headaches, given Bass Coast finished the year with no losses and a percentage of over 1000.