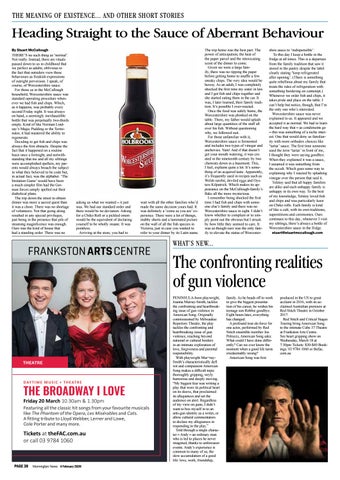 Heading Straight to the Sauce of Aberrant Behaviour By Stuart McCullough THERE’S no such thing as ‘normal’. Not really. Instead, there are rituals passed down to us in childhood that we perfect as adults; oblivious to the fact that outsiders view these behaviours as freakish expressions of outright perversion. I speak, of course, of Worcestershire sauce. For those us in the McCullough household, Worcestershire sauce was standard operating procedure whenever we had fish and chips. Which, as it happens, was probably every second Friday night. It was always on hand, a seemingly inexhaustible bottle that was perpetually two-thirds empty. Kind of like Norman Lindsay’s Magic Pudding or the Terminator, it had mastered the ability to regenerate. Deciding to get fish and chips was always the first obstacle. Despite the fact that it happened on a routine basis once a fortnight, and notwithstanding that me and all my siblings were accomplished spellers, my parents would always broach the subject in what they believed to be code but, in actual fact, was the alphabet. ‘The Imitation Game’ would have been a much simpler film had the German forces simply spelled out their diabolical plans. The trip down the street to obtain dinner was more a sacred quest than it was a chore. There was no shortage of volunteers. Not that going along resulted in any special privileges, just being in the presence that pile of steaming magnificence was enough. Ours was the kind of house that had a standing order. There was no

asking us what we wanted – it just was. We had our standard order and there would be no deviation. Asking for a Chiko Roll or a pickled onion would be the equivalent of declaring yourself to be wholly insane. It was pointless. Arriving at the store, you had to

wait with all the other families who’d made the same decision yours had. It was definitely a ‘come as you are’ experience. There were a lot of thongs, stubby shorts and a laminated picture on the wall of all the fish species in Victoria, just in case you wanted to refer to your dinner by its Latin name.

The trip home was the best part. The power of anticipation, the heat of the paper parcel and the intoxicating scent of the dinner to come. Given we were a large family, there was no ripping the paper before getting home to snaffle a few sneaky chips. The very idea would be heresy. As an adult, I was completely shocked the first time my sister in law and I got fish and chips together and she started eating them in the car. It was, I later learned, their family tradition. It’s possible I over-reacted. Once the food was safely home, the Worcestershire was plonked on the table. There, my father would splash about large quantities of the stuff all over his fish. Without questioning why, we followed suit. For those unfamiliar with it, Worcestershire sauce is fermented and includes two types of vinegar and anchovies. Yum! And if that doesn’t get your mouth watering, it was created in the nineteenth century by two chemists down in a basement. This, I feel, explains quite a lot. It’s something of an acquired taste. Apparently, it’s frequently used in recipes such as Welsh rarebit, deviled eggs and Oysters Kilpatrick. Which makes its appearance on the McCullough-family’s flake all the more mysterious. I remember being shocked the first time I had fish and chips with someone else’s family and there was no Worcestershire sauce in sight. I didn’t know whether to complain or to simply point out the obvious but I struck by how little they seemed to care. It was as though ours was the only family to elevate the status of Worcester-

shire sauce to ‘indispensible’. To this day I keep a bottle in the fridge at all times. This is a departure from the family tradition that saw it stored in the pantry despite the label clearly stating ‘keep refrigerated after opening’. (There is something quite rebellious about my family that treats the rules of refrigeration with something bordering on contempt.) Whenever we order fish and chips, it takes pride and place on the table. I can’t help but notice, though, that I’m the only one who’s interested. Worcestershire sauce was never explained to us. It appeared and we accepted it as normal. We had to learn the hard way that – as condiments go – this was something of a niche interest. One that would deny us familiarity with more orthodox choices like ‘tartar’ sauce. The first time someone used the term ‘tartar’ in front of me, I thought they were saying goodbye. When they explained it was a sauce, I assumed it was something from the occult. Which goes some way to explaining why I reacted by splashing vinegar over the person that said it. Tolstoy said that all happy families are alike and each unhappy family is unhappy in its own way. To the best of my knowledge, Tolstoy loved fish and chips and was particularly keen on Chiko rolls. Each family is kind of like a cult; with its own traditions, superstitions and ceremonies. Ours continues to this day; whenever I visit my siblings, there’s always a bottle of Worcestershire sauce in the fridge. stuart@stuartmccullough.com

The confronting realities of gun violence PENINSULA-born playwright, Joanna Murray-Smith, tackles the confronting and heartbreaking issue of gun violence in American Song. Originally commissioned by Milwaukee Repertory Theatre, the play tackles the confronting and heartbreaking issue of gun violence, reaching beyond national or cultural borders in an intimate exploration of love, forgiveness and parental responsibility. With playwright Mur¬raySmith’s characteristically deft wit and compassion American Song makes a difficult topic thoroughly gripping, wryly humorous and deeply moving. “My biggest fear was writing a play that wore its political heart on its sleeve, that proclaimed its allegiances and set the audience on alert. Regardless of my view on guns, I didn’t want to box myself in to an anti-gun identity as a writer, or allow cultural commentators to declare my allegiances in responding to the play.” Told through a single character – Andy – an ordinary man who is led to places he never imagined, thanks to unforeseen events. Andy’s experience is common to many of us; the slow accumulation of a good life: love, work, friendship,

family. As he heads off to work to give the biggest presentation of his career, he wishes his teenage son Robbie goodbye. Eight hours later, everything has changed. A profound tour-de-force for one actor, performed by Red Stitch ensemble member Joe Petruzzi, American Song asks: What could I have done differently? Can we ever know the moment when a good life turns irredeemably wrong? American Song was first

produced in the US to great acclaim in 2016, with its acclaimed Australian premiere at Red Stitch Theatre in October 2017. Red Stitch and Critical Stages Touring bring American Song to the intimate Cube 37 Theatre at Frankston Arts Centre. See heart gripping show on Wednesday, March 18 at 7.30pm Tickets: $30-$40 Bookings: 03 9784 1060 or thefac. com.au