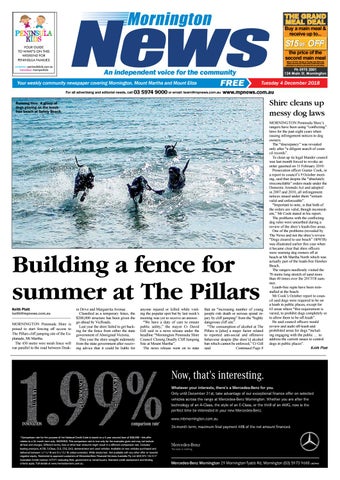 the price of the second main meal Valid to 13/12/18. Monday to Thursday only. Bistro only.

Running free: A group of dogs playing on the leashfree beach at Safety Beach.

Building a fence for summer at The Pillars Keith Platt keith@mpnews.com.au MORNINGTON Peninsula Shire is poised to start fencing off access to The Pillars cliff jumping site of the Esplanade, Mt Martha. The 450 metre wire mesh fence will run parallel to the road between Deak-

anyone injured or killed while visiting the popular spot but by last week’s meeting was yet to receive an answer. “We have a duty of care to ensure public safety,” the mayor Cr David Gill said in a news release under the headline “Mornington Peninsula Shire Council Closing Deadly Cliff Jumping Site at Mount Martha”. The news release went on to state

that an “increasing number of young people risk death or serious spinal injury by cliff jumping” from the “highly dangerous cliff site”. “The consumption of alcohol at The Pillars is [also] a major factor related to reported anti-social and offensive behaviour despite [the shire’s] alcohol ban which cannot be enforced,” Cr Gill said. Continued Page 8

MORNINGTON Peninsula Shire’s rangers have been using “conflicting” laws for the past eight years when issuing infringement notices to dog owners. The “discrepancy” was revealed only after “a diligent search of council records”. To clean up its legal blunder council was last month forced to revoke an order gazetted on 11 February 2010. Prosecution officer Gustav Cook, in a report to council’s 9 October meeting, said that despite the “absolutely irreconcilable” orders made under the Domestic Animals Act and adopted in 2007 and 2010, all infringement notices issued under them “remain valid and enforceable”. “Important to note, is that both of the orders are valid, though inconsistent,” Mr Cook stated in his report. The problems with the conflicting dog rules were unearthed during a review of the shire’s leash-free areas. One of the problems (revealed by The News and not the shire’s review “Dogs cleared to use beach” 18/9/18) was illustrated earlier this year when it became clear that shire officers were warning dog owners off at beach at Mt Martha North which was actually part of the leash-free Hawker Beach. The rangers needlessly visited the 70 metre long stretch of sand more than 40 times over the 2017/18 summer. Leash-free signs have been reinstalled at the beach. Mr Cook’s October report to council said dogs were required to be on a leash in public places, except for 63 areas where “this requirement is varied, to prohibit dogs completely or to allow them to be off-leash”. He said council officers would review and audit off-leash and prohibited areas for dogs “including engaging with the public … to address the current issues to control dogs in public places”. Keith Platt

Now, that’s interesting. Whatever your interests, there’s a Mercedes-Benz for you. Only until December 31st, take advantage of our exceptional finance offer on selected vehicles across the range at Mercedes-Benz Mornington. Whether you are after the technology of an A-Class, the style of an E-Class, or the thrill of an AMG, now is the perfect time be interested in your new Mercedes-Benz. www.mbmornington.com.au 36-month term; maximum final payment 48% of the net amount financed. *Comparison rate for the purpose of the National Credit Code is based on a 5 year secured loan of $30,000 - this offer relates to a 36 month term only. WARNING: This comparison rate is true only for the examples given and may not include all fees and charges. Different terms, fees or other loan amounts might result in a different comparison rate. Excludes leasing products, A250, C-Class, CLS, E53, G63, demonstrator and used vehicles. Available on new vehicles purchased and delivered between 1/11/18 and 31/12/18 unless extended. While stocks last. Not available with any other offer or towards negative equity. Restricted to approved customers of Mercedes-Benz Financial Services Australia Pty Ltd ACN 074 134 517 Australian Credit Licence 247271 excluding fleet, government or rental buyers. Standard credit assessment and lending criteria apply. Full details at www.mercedes-benz.com.au.