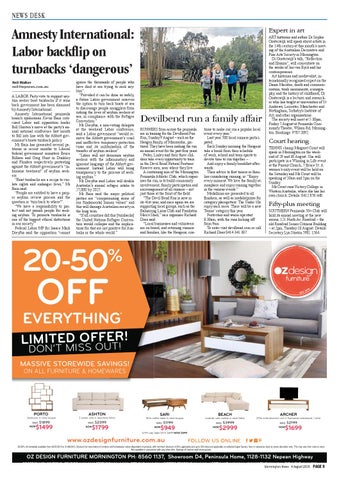 ignore the thousands of people who have died at sea trying to seek asylumâ&#x20AC;?. â&#x20AC;&#x153;Provided it can be done so safely, a future Labor government reserves the option to turn back boats at sea to discourage people smugglers from risking the lives of asylum seekers at sea, in compliance with the Refugee Convention.â&#x20AC;? Mr Dreyfus, a non-voting delegate at the weekend Labor conference, said a Labor government â&#x20AC;&#x153;would remove the Abbott governmentâ&#x20AC;&#x2122;s cruel and ineffective temporary protection visas and its militarisation of the transfer of asylum seekersâ&#x20AC;?. â&#x20AC;&#x153;Labor will not demonise asylum seekers with the inflammatory and ignorant language of the Abbott government. Instead Labor will bring transparency to the process of seeking asylum.â&#x20AC;? Mr Dreyfus said Labor will double Australiaâ&#x20AC;&#x2122;s annual refugee intake to 27,000 by 2025. Mr Bain said the major political parties are â&#x20AC;&#x153;compromising some of our fundamental human valuesâ&#x20AC;? and this will damage Australian society in the long term. â&#x20AC;&#x153;If all countries did this [turnbacks] the United Nations Refugee Convention would collapse and the implications for that are not positive for Australia or the whole world.â&#x20AC;?

Devilbend run a family affair RUNNERS from across the peninsula are in training for the Devilbend Fun Run, Sunday 9 August â&#x20AC;&#x201C; such as the Haugen family, of Moorooduc, pictured. They have been making the run an annual event for the past four years. Peder, Linley and their three children take every opportunity to train in the Devil Bend Natural Features Reserve area, near where they live. A continuing aim of the Mornington Peninsula Athletic Club, which organises the run, is to build community involvement, family participation and encouragement of all runners â&#x20AC;&#x201C; not just those at the front of the field. â&#x20AC;&#x153;The Devil Bend Run is now in its 41st year, and once again we are supporting local groups, such as the Balnarring Lions Club and Frankston Menâ&#x20AC;&#x2122;s Shed,â&#x20AC;? race organiser Richard Does said. â&#x20AC;&#x153;Local businesses and volunteers are on board, and returning runners and families, like the Haugens, con-

tinue to make our run a popular local event every year.â&#x20AC;? Last year 500 local runners participated. Each Sunday morning the Haugens take a break from their schedule of work, school and team sports to devote time to run together â&#x20AC;&#x201C; And enjoy a family breakfast afterwards. Their advice to first timers or families considering running, is: â&#x20AC;&#x153;Enjoy every moment. We love the family atmosphere and enjoy running together in the various events.â&#x20AC;? Medallions are presented to all finishers, as well as medals/prizes for category placegetters. The Under 10s enjoy sack races. There will be a new Teamsâ&#x20AC;&#x2122; category this year. Festivities and warm-ups start 8.30am, with the runs kicking off from 9am. To enter visit devilbend.com or call Richard Does 0414 341 387.

ART historian and author Dr Sophie Oosterwijk will speak about artists in the 14th century at this monthâ&#x20AC;&#x2122;s meeting of the Australian Decorative and Fine Arts Society in Mornington. Dr Oosterwijkâ&#x20AC;&#x2122;s talk, â&#x20AC;&#x153;Reflection and Illusionâ&#x20AC;?, will concentrate on the works of Jan van Eyck and his contemporaries. Art historian and medievalist; internationally recognised expert on the Danse Macabre, death and commemoration, tomb monuments, iconography, and the history of childhood, Dr Oosterwijk is a lecturer and researcher who has taught at universities of St Andrews, Leicester, Manchester and Nottingham, Sotheby's Institute of Art, and other organisations. The society will meet at 5.30pm, Friday 7 August at Peninsula Community Theatre, Wilson Rd, Mornington. Bookings: 9787 2092.

Court hearing TENNIS champ Margaret Court will speak in Mornington on the weekend of 29 and 30 August. She will participate in a Winning in Life event at the Pursuit Church, 7 Bruce St. A womenâ&#x20AC;&#x2122;s only event will be held on the Saturday and Ms Court will be speaking at 10am and 5pm on the Sunday. Ms Court runs Victory College in Western Australia, where she has her own church. Details: 0412 876 440.