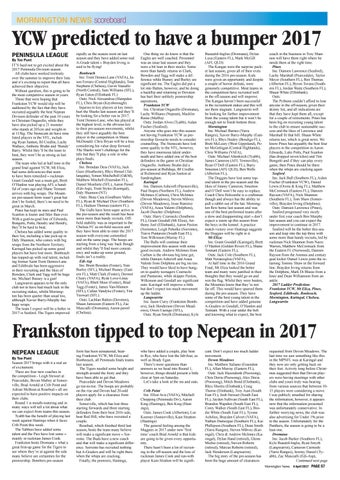 YCW predicted to have a bumper 2017 PENINSULA LEAGUE

By Toe Punt IT’S hard not to get excited about the 2017 Peninsula Division season. All clubs have worked tirelessly over the summer to improve their lists and it’s exciting to report that all have achieved their objective. Without question, this is going to be the most competitive season in years. Those that were hoping that Frankston YCW would slip will be saddened by the fact that they have recruited arguably the best Nepean Division defender of the past 10 years in Christian Ongarello, while they have also picked up a 21 monster who stands at 205cm and weight-in at 115kg. The Stonecats do have nine listed players in the VFL, including Ryan Santon, BJ Credlin, Lachy Wallace, Anthony Bruhn and ‘Bundy’ Barry. Whilst they’ll be the team to beat, they won’t be as strong as last season. The team who led at half time in the grand final against YCW, Mt Eliza, had some deficiencies that seem to have been remedied – ruckman Grant Goodall was a must-get, Brett O’Hanlon was playing AFL a handful of years ago and Shane Tennant arrives with big wraps. The Mounties pre-season form wasn’t great but don’t be fooled, there’s no need to be great in March. Pines has kept its stars and Paul Scanlon is leaner and fitter than ever. With a goal-to-goal line of Edwards, Bongetti, Potts, Hendry and Hendry, they’ll be hard to beat. Chelsea has added some quality to their list, including a late pick-up in Daly Shannon, who comes with big wraps from the Northern Territory. Karingal has picked up some good players but have lost more. Bonbeach has topped-up with real talent, including former Saint Trent Dennis-Lane and Edithvale has been aggressive in their recruiting and the likes of Bowden, Clark and Tagg will be huge ins. Michael Bussey is a gun! Langwarrin appears to be the only club not to have had much luck in the recruiting stakes, whilst Mornington has been quieter than usual too, although Xavier Barry-Murphy has huge wraps. The team I expect will be a bolter in 2017 is Seaford. The Tigers improved

One thing we do know is that the Eagles are well coached. Personnel was an issue last season and they were a bit lean in their stocks. Some more than handy returns in Clark, Bowden and Tagg will make a difference while Bussey and Burley are significant ins. The Eagles did put a lot into Batten, however, and he doing a backflip and returning to Doveton has hurt their unlikely premiership aspirations. Frankston YCW Ins: Christian Ongarello (Dromana), Lachy Williams (Nepean), Macklin Raine (Maffra) Outs: Jordan Alves (Tyabb), Aidan Fischer (Seaford). Anyone who goes into this season not having Frankston YCW as premiership favourite needs to consider counselling. The Stonecats have lost some quality to the VFL, however, they have enormous talent underneath and have added one of the best defenders in the game in Christian Ongarello. Anthony Bruhn did a pre-season at Bulldogs, BJ Credlin at Richmond and Ryan Santon at Sandringham. Karingal Ins: Damien Ashcroft (Paynesville), Paul Hopes (Northern FL), Andrew McInnes (Carlton), Chris McInnes (Devon Meadows), Steven Mihvec (Devon Meadows), Jesse Ramirez (VAFA), Aisea Valenti (Dolphins), Jacob Duscher (Dolphins) Outs: Harry Czarnecki (Southern FL), Grant Goodall (Mt Eliza), Anthony Joel (Ellinbank), Aaron Paxton (Sorrento), Leigh Poholke (Sorrento), Travis Puntaroni (South East FL), Tom Wilkinson (Murray FL) The Bulls will continue their improvement this season with some good recruits. Andrew McInnes from Carlton is the obvious big time get, while Damien Ashcroft and Aisea Valenti from Dolphins are big ins too. They would have liked to have hungon to quality teenagers Czarnecki and Puntaroni, while skipper Paxton, Wilkinson and Goodall are significant outs. Karingal will improve a little but don’t expect too much movement up the ladder. Langwarrin Ins: Jason Curry (Frankston Bombers), Jack Henderson (Devon Meadows), Owen Uaongo (SFL), Outs: Ryan Smyth (Dromana), Kyle

Bussuttil-Ingliss (Dromana), Dylan Luxa (Eastern FL), Mark McGill (AFL QLD) The Kangas were the surprise packet last season, given all of their exits during the 2016 pre-season. Kids were given an opportunity and despite a couple of horror defeats, were genuinely competitive. Most teams in the competition have recruited well in the off-season and will improve. The Kangas haven’t been successful in the recruitment stakes and this will see them stagnate. Langwarrin will be looking for further improvement from the young talent but it won’t be enough not to finish bottom three. Mornington Ins: Michael Barnes (Yarra Ranges), Xavier Barry-Murphy (Eastern FL), Rhys Healey (Bendigo FL), Brett McLeary (West Gippsland), Peter McGettigan (Central Highlands), Chris Williams (VAFA), Outs: Michael Altenkirch (Tyabb), James Cameron (AFL Townsville), Ryan O’Dell (Eastern FL), Barry Smeeton (AFL QLD), Ben Wells (Alberton FL), The Doggies have lost some topend talent in the pre-season and the likes of Jimmy Cameron, Smeeton and O’Dell won’t be easy to replace. Coach Chris Holcombe is a craftsman though and always has the ability to pull a rabbit out of the hat. Mornington flew home last season and was one of the best performed teams after a slow and disappointing start – don’t expect a warm up this season from the boys in the kennel. A practice match victory over Hastings suggests the Doggies will be right in it. Mt Eliza: Ins: Grant Goodall (Karingal), Brett O’Hanlon (Golden Rivers FL), Shane Tennant (Eastern FL), Outs: Jack Cole (Southern FL), Matt Neratzoglou (VAFA), At half time in the 2016 Grand Final, Mt Eliza looked the better team and many were justified in their thoughts that they would go on and win the flag. Whilst they were beaten, the Mounties know that they’re not far off. This would have spurred them during the pre-season. They have some of the best young talent in the competition and have added genuine A-Graders in Goodall, O’Hanlon and Tennant. With a year under the belt and knowing what to expect, the best

coach in the business in Troy Shannon will have them right where he needs them at the right time. Pines Ins: Damien Lawrence (Seaford), Lachy Marshall (Pearcedale), Taylor Meyer (Southern FL), Ben Thomas (Alberton FL), Byron Tovara (Southern FL), Jordan Waite (Southern FL), Shaun White (Ellinbank). Outs: The Pythons couldn’t afford to lose anyone in the off-season, given their skinny list, and all indications are that they have kept them all, except for a couple of retirements. Pines has been big on recruiting young talent to the club to ensure sustainable success and the likes of Lawrence and Marshall fit that bill. Shaun White returns too, which is great news. We know Pines has arguably the best four players in the competition in Aaron Edwards, Luke Potts, Paul Scanlon (has dropped seven kilos) and Tim Bongetti and if they can play every game, then Pines should be there when the whips are cracking again. Seaford Ins: Jack Ball (Southern FL), Aiden Fischer (Frankston YCW), Daniel Lewis (Ovens & King FL), Matthew McCormack (Eastern FL), Damien Rayson (VAFA), Nick Shannon (Southern FL), Tom Shaw (Somerville), Brayden Irving (Dolphins). Outs: Damien Lawrence (Pines), Seaford progressed very nicely under first year coach Ben Murphy last season and you can expect the improvement to continue in 2017. Seaford will be the bolter this season and leap into the top three with some more than handy recruits, led by ruckman Nick Shannon from Narre Warren, Matthew McCormack from the Eastern FL (Norwood), Damien Rayson from the Ammos and century goal kicker Daniel Lewis joins the returning Tommy Shaw in the forward line. Brayden Irving returns from the Dolphins, Mark Di Blasio from a knee and Dean Williamson from an ankle. 2017 Ladder Prediction: Frankston YCW, Mt Eliza, Pines, Seaford, Edithvale, Bonbeach, Mornington, Karingal, Chelsea, Langwarrin

Frankston tipped to top Nepean in 2017 NEPEAN LEAGUE By Toe Punt Season 2017 brings with it a real air of excitement. There are four new coaches in the competition - Leigh Stewart at Pearcedale, Bevan Malloy at Somerville, Brad Arnold at Crib Point and Adrian McBean at Rosebud – all are expected to have positive impacts on their clubs. Round 1 is mouth-watering and in many ways will tell a lot about what we can expect from teams this season. Tyabb has the benefit of playing last week against Hastings when it faces Crib Point this week. The Yabbies have added some talent and the Pies have lost some – mainly in ruckman James Cook. Frankston hosts Dromana – what a great first-up game for the Tigers to see where they’re at against the side many believe are certainties for the premiership. Bombers pre-season

form has been sensational, beating Frankston YCW, Mt Eliza and Bonbeeach, all Peninsula finals teams last season. The Tigers needed some height and strength around the footy and they have been able to get that. Pearcedale and Devon Meadows go toe-to-toe. The hoops are probably on the rise and Devon had 20-odd players apply for a clearance from their club. Somerville, which has lost three starting forwards and three starting defenders from their best 2016 side, host Red Hill, who have recruited a couple. Rosebud, which finished third last season, hosts the team many believe will make a significant move – Sorrento. The Buds have a new coach and that will make a significant difference. Sorrento has recruited nothing but A-Graders and will be right there when the whips are cracking. Finally, the premiers, Hastings,

who have added a couple, play host to Rye, who have lost the fab-four, as well as Brady Egan. There’s more questions than answers as we head into Round 1, however, things should present a little clear at 5pm on Saturday. Let’s take a look at the ins and outs. Crib Point Ins: Elliot Avis (VAFA), Mitchell Chopping (Peninsula Div), Aaron King (Hastings), Ben King (Hastings), Outs: James Cook (Alberton), Lee Koerner (Somerville), Kain Stratton (Hastings) The general feeling among the Magpies in 2017 under new ‘first time’ coach Brad Arnold is that kids are going to be given every opportunity. There hasn’t been a lot of recruiting in the off-season and the loss of ruckman James Cook and run-with player Kain Stratton will be signifi-

requested from Devon Meadows. The last time we saw something like this in the MPNFL was at Karingal and they now are only getting back on their feet. Activity long before Christmas suggested then that Devon players were having meetings with other clubs and yours truly was hearing from various sources that between 1015 players were considering a move. I was publicly smashed for sharing the information, however, it appears now that the information presented was unfortunately conservative. In further worrying news, the club was also advertising for Under 19s prior to the season. Unfortunately for the Panthers, the season is going to be a lean one. Dromana Ins: Jacob Barker (Southern FL), Kyle Busuttil-Inglis, Ryan Smyth (Langwarrin), Cameron Carmody (Yarra Ranges), Jeremy Daniel (Tyabb), Zac Muscialli (Edi-Asp), Continued next page Mornington News 4 April 2017