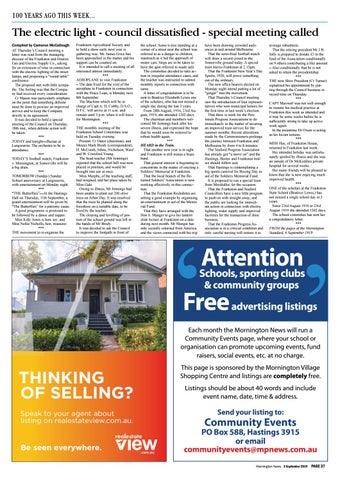 The electric light - council dissatisfied - special meeting called Compiled by Cameron McCullough AT Thursday’s Council meeting a letter was read from the managing director of the Frankston and District Gas and Electric Supply Co., asking for an extension of time in connection with the electric lighting of the street lamps, and proposing a “round table” conference. The proposal met with little sympathy. The feeling was that the Company had received every consideration. Cr Mason was particularly emphatic on the point that something definite must be done to procure an improved service and to keep the Company strictly to its agreement. It was decided to hold a special meeting of the Council on Thursday, 18th inst., when definite action will be taken. *** TODAY and tonight—Bazaar at Langwarrin. The orchestra to be in attendance. *** TODAY’S football match, Frankston v. Mornington, at Somerville will be a big draw. *** TOMORROW (Sunday) Sunday School anniversary at Langwarrin, with entertainment on Monday night. *** “THE Butterflies”—At the Hastings Hall on Thursday, 11th September, a grand entertainment will be given by “The Butterflies” for a patriotic cause. A good programme is promised to be followed by a dance and supper. Miss Kitty Jones is hon. sec. and Miss Nellie Nicholls, hon. treasurer. *** THE movement to re-organise the

Frankston Agricultural Society and to hold a show early next year is gathering way. Mr. James Grice has been approached in the matter and his support can be counted on. It is intended to call a meeting of all interested almost immediately. *** AEROPLANE to visit Frankston – The date fixed for the visit of the aeroplane to Frankston in connection with the Peace Loan, is Monday next 8th September. The Machine which will be in charge of Capt A. H. Cobby, D.S.O., D.F.C. will arrive at 11 a.m. and remain until 3 p.m. when it will leave for Mornington. *** THE monthly meeting of the Frankston School Committee was held on Tuesday evening. Present: Cr Oates (chairman), and Messrs Mark Brody (correspondent), H. McComb, Johns, Nicholson, Ward and W. Crawford Young. The head teacher (Mr Jennings) reported that the school bell was now placed in position, and would be brought into use at once. Miss Murphy, of the teaching staff, had resigned, and her place taken by Miss Gale. Owing to illness, Mr Jennings had been unable to plant out 200 olive trees on Arbor Day. It was resolved that the trees be planted along the foreshore on a suitable date, to be fixed by the teacher. The clearing and levelling of portion of the school ground was left in the hands of Mr Brody. It was decided to ask the Council to improve the footpath in front of

the school. Some ti-tree standing at a corner of a street near the school was referred to as a danger to children, inasmuch as it hid the approach of motor cars. Steps are to be taken to have the spot referred to made safe. The committee decided to take action in irregular attendance cases, and the teacher was instructed to submit monthly reports in connection with same. A letter of congratulation is to be sent to Beatrice Elizabeth Lewis one of the scholars, who has not missed a single day during the last 3 years. From 28th August, 1916, 23rd August, 1919, she attended 1202 days. The chairman and members welcomed Mr Jennings back after his severe illness, and expressed the hope that he would soon be restored to robust health again. *** HEARD in the Train. That another new year is in sight and Frankston is still minus a brass band. That general interest is beginning to concentrate in the matter of erecting a Soldiers’ Memorial at Frankston. That the local branch of the Returned Soldiers’ Association is now working effectively in this connection. That the Frankston Rechabites are setting a good example by organising an entertainment in aid of the Memorial Fund. That they have arranged with the Hon S. Manger to give his lantern slide lecture at Frankston on a date during next month. Mr Manger has only recently returned from America and the views connected with his trip

have been drawing crowded audiences in and around Melbourne. That the semi-final football match will draw a record crowd to the Somerville ground today. A special train leaves Frankston at 2.15pm. That the Frankston New Year’s Day Sports, 1920, will prove something out of the ordinary. The new office bearers elected on Monday night intend putting a lot of “ginger” into the movement. That Thursday’s Council meeting saw the introduction of four representatives who won municipal honors for the first time in last week’s election. That there is work for the Peninsula Progress Associations to do immediately in the matter of securing an improved train service for the summer months. Recent alterations made by the Commissioners prolongs the journey between Frankston and Melbourne by from 4 to 8 minutes. The Seaford Progress Association has already got “a move on” and the Hastings, Baxter and Frankston bodies should follow suit. That Hastings is contemplating a big sports carnival for Boxing Day in aid of the Soldiers Memorial Fund. It is proposed to run a special train from Mordialloc for the occasion. That the Frankston and Seaford Councillors have a nice little program to push on with straight away, and the public are looking for immediate action in connection with electric lighting, water supply and improved facilities for the transaction of shire business. That the Frankston Progress Association is in a criticial condition and only careful nursing will restore it to

average robustness. That the retiring president Mr J B. Jolly is prepared to donate £5 to the fund of the Association conditionally on 9 others contributing a like amount – Also conditionally that he is not asked to retain the presidentship. *** THE now Shire President (Cr Turner) signalised his appointment by putting through the Council business in record time on Thursday. *** CAPT Maxwell was not well enough to resume his medical practice at Frankston this week as intended and it may be some weeks before he is sufficiently strong to take up active work again. In the meantime Dr Owen is acting as his locum temens. *** MISS Hay, of Frankston House, returned to Frankston last week. Her intended holiday was unfortunately spoiled by illness and she was an inmate of Dr McKeddies private hospital for several weeks. Her many friends will be pleased to know that she is now enjoying much improved health. *** ONE of the scholars at the Frankston State School (Beatrice Lewis,) has not missed a single school day in 3 years. Since 23rd August 1916 to 23rd August 1919 she attended 1202 days. The school committee has sent her a congratulatory letter. *** FROM the pages of the Mornington Standard, 6 September 1919

Free advertising listings Each month the Mornington News will run a Community Events page, where your school or organisation can promote upcoming events, fund raisers, social events, etc. at no charge.

This page is sponsored by the Mornington Village Shopping Centre and listings are completely free.

Listings should be about 40 words and include event name, date, time &amp; address.