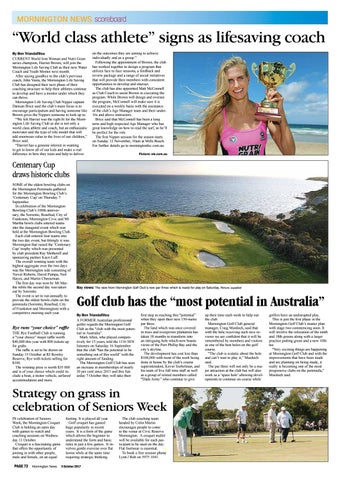 on the outcomes they are aiming to achieve individually and as a group.” Following the appointment of Brown, the club has worked together to design a program that utilizes face to face sessions, a feedback and review package and a range of social initiatives that will provide their members with consistent opportunities to develop and interact. The club has also appointed Matt McConnell as Club Coach to assist Brown in executing the program. While Brown will design and oversee the program, McConnell will make sure it is executed on a weekly basis with the assistance of the club’s Age Manager team and their under16s and above instructors. Brice said that McConnell has been a long term and high respected Age Manager who has great knowledge on how to read the surf, so he’ll be perfect for the role. The first Nipper session for the season starts on Sunday 12 November, 10am at Mills Beach. For further details go to morningtonlsc.com.au. Picture: sls.com.au

THE Rye Football Club is running a “your choice” major raffle worth $40,000 this year with 800 tickets up for grabs. The raffle is set to be drawn on Sunday 15 October at RJ Rowley Reserve, Rye with tickets selling for $100. The winning prize is worth $35 000 and is of your choice which could include a boat, a motor vehicle, airfares/ accommodation and more.

Bay views: The view from Mornington Golf Club’s new par three which is ready for play on Saturday. Picture: supplied

Golf club has the “most potential in Australia” By Ben Triandafillou A FORMER Australian professional golfer regards the Mornington Golf Club as the “club with the most potential in Australia”. Mark Allen, who played competitively for 15 years, told the 1116 SEN listeners on Saturday 16 September that the club “has the potential to be something out of this world” with the right amount of funding. The Mornington Golf Club has seen an increase in memberships of nearly 30 per cent since 2015 and this Saturday 7 October they will take their

first step in reaching this “potential” when they open their new 150-metre par three. The land which was once covered in trees and overgrown plantation has taken 18 months to transform into an intriguing hole which now boasts views of the Port Phillip Bay and the city’s skyline. The development has cost less than $100,000 with most of the work being done in house by the club’s course superintendent, Kevin Toebelman, and his team of five full time staff as well as a group of retired members called “Dads Army” who continue to give

footing. It is played all year. Golf croquet has gained huge popularity in recent years. It is a form of the game which allows the beginner to understand the form and basic rules in just a few games. It involves gentle exercise over flat lawns while at the same time requiring strategic thinking. 3 October 2017

The club coaching team headed by Colin Martin encourages people to come to the venue at Civic Reserve Mornington. A croquet mallet will be available for each participant to be used on the day. Flat footwear is essential. To book a free session phone Lynn / Rob on 5975 1041.

up their time each week to help out the club. Mornington Golf Club general manager, Craig Murdoch, said that with the hole receiving such rave reviews we are confident that it will be remembered by members and visitors as one of the best holes on the golf course. “The club is ecstatic about the hole and can’t wait to play it,” Murdoch said. The par three will not only be a major attraction at the club but will also work as a ‘spare hole’ allowing developments to continue on course while

golfers have an undisrupted play. This is just the first phase in the Mornington Golf Club’s master plan with stage two commencing soon. It will involve the relocation of the ninth and 18th greens along with a larger practice putting green and a new 10th tee. “Very exciting things are happening at Mornington Golf Club and with the improvements that have been made and are planning on being made, it really is becoming one of the most progressive clubs on the peninsula,” Murdoch said.