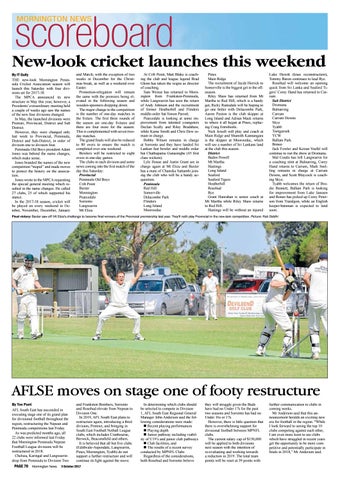 By IT Gully THE new-look Mornington Peninsula Cricket Association season will launch this Saturday with four divisions set for 2017-18. The MPCA announced its new structure in May this year, however, a Presidents’ extraordinary meeting held a couple of weeks ago saw the names of the new four divisions changed. In May, the launched divisions were Premier, Provincial, District and Sub District. However, they were changed only last week to Provincial, Peninsula, District and Sub-District, in order of division one to division four. Peninsula Old Boys president Adam Jones was behind the name changes, which make sense. Jones branded the names of the new competition “stupid’’ and made moves to protect the history on the association. Jones wrote to the MPCA requesting the special general meeting which resulted in the name changes. He called 27 clubs, 25 of which supported his stance. In the 2017-18 season, cricket will be played on every weekend in October, November, December, January

and March; with the exception of two weeks in December for the Christmas break, as well as a weekend over Easter. Promotion-relegation will remain the same with the premiers being elevated in the following season and wooden-spooners dropping down. The major change to the competition is the number of one-day matches in the fixture. The first three rounds of the season are one-day fixtures and there are four more for the season. This is complemented with seven twoday matches. The grand finals will also be reduced to 80 overs to ensure the match is completed over one weekend. Bowlers will be restricted to eight overs in one-day games. The clubs in each division and some news coming into the first match of the day this Saturday: Provincial Peninsula Old Boys Crib Point Baxter Mornington Pearcedale Sorrento Langwarrin Mt Eliza

At Crib Point, Matt Blake is coaching the club and league legend Brad Glenn has taken the reigns as director of coaching. Sam Weisse has returned to Mornington from Frankston-Peninsula, while Langwarrin has seen the return of Andy Johnson and the recruitment of former Heatherhill and Flinders middle-order bat Simon Parrott. Pearcedale is looking at some improvement from talented youngsters Declan Scully and Riley Bradshaw, while Kaine Smith and Chris Dew remain in charge. Bobby Wilson remains in charge at Sorrento and they have landed Sri Lankan fast bowler and middle order bat Chathupama Gunasinghe (45 first class wickets). Lyle House and Justin Grant are in charge again at Mt Eliza and Baxter has a mate of Chamika Sattambi joining the club who will be a handy acquisition. Peninsula Red Hill Somerville Delacombe Park Flinders Long Island Moorooduc

Pines Main Ridge The recruitment of Jayde Herrick to Somerville is the biggest get in the offseason. Riley Shaw has returned from Mt Martha to Red Hill, which is a handy get, Ricky Ramsdale will be hoping to go one better with Delacombe Park, Aaron Paxton is the club skipper at Long Island and Adrian Mack returns to where it all began at Pines, replacing Craig Entwhistle. Nick Jewell will play and coach at Main Ridge and Shamith Kannangara is the skipper at Moorooduc, which will see a number of Sri Lankans land at the club this season. District Baden Powell Mt Martha Hastings Long Island Seaford Seaford Tigers Heatherhill Rosebud Rye Grant Hanrahan is senior coach at Mt Martha while Riley Shaw returns to Red Hill. Hastings will be without an injured

AFLSE moves on stage one of footy restructure By Toe Punt AFL South East has succeeded in executing stage one of its grand plan for divisional football throughout the region, restructuring the Nepean and Peninsula competitions last Friday. As was predicted months ago, all 22 clubs were informed last Friday that Mornington Peninsula Nepean Football League divisions will be restructured in 2018. Chelsea, Karingal and Langwarrin drop from Peninsula to Division Two

and Frankston Bombers, Sorrento and Rosebud elevate from Nepean to Division One. In 2019, AFL South East plans to restructure again, introducing a third division, Premier, and bringing in South East Football Netball League clubs, which includes Cranbourne, Berwick, Beaconsfield and others. It is believed that all but five clubs (Edithvale-Aspendale, Langwarrin, Pines, Mornington, Tyabb) do not support a further restructure and will continue its fight against the move.

In determining which clubs should be selected to compete in Division 1, AFL South East Regional General Manager John Anderson said the following considerations were made: n Recent playing performances n Playing depth n Junior pathway including viability of U19’s and junior club pathways n Club facilities, and n The results of a recent survey conducted by MPNFL Clubs Regardless of the considerations, both Rosebud and Sorrento believe

they will struggle given the Buds have had no Under 17s for the past two seasons and Sorrento has had no Under 16s or 17s. However, there is little question that there is overwhelming support for divisional football between MPNFL clubs. The current salary cap of $150,000 will be applied to both divisions next season with the intention of re-evaluating and working towards a reduction in 2019. The total team points will be reset at 39 points with

further communication to clubs in coming weeks. Mr Anderson said that this announcement heralds an exciting new era for football in the region. “While I look forward to seeing the top 10 clubs competing against each other, I am even more keen to see clubs which have struggled in recent years get the opportunity to be more competitive and potentially participate in finals in 2018,” Mr Anderson said.