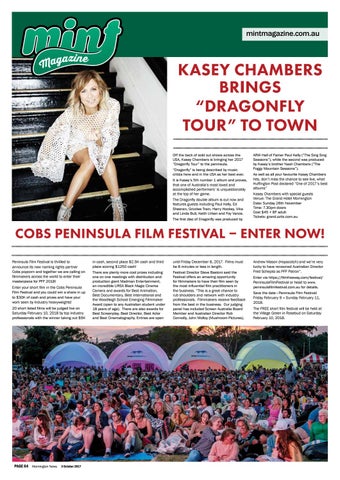 KASEY CHAMBERS BRINGS “DRAGONFLY TOUR” TO TOWN Off the back of sold out shows across the USA, Kasey Chambers is bringing her 2017 “Dragonfly Tour” to the peninsula. “Dragonfly” is being described by music critics here and in the USA as her best ever. It is Kasey’s 5th number 1 album and proves, that one of Australia’s most loved and accomplished performers’ is unquestionably at the top of her game. The Dragonfly double album is out now and features guests including Paul Kelly, Ed Sheeran, Grizzlee Train, Harry Hookey, Vika and Linda Bull, Keith Urban and Foy Vance. The first disc of Dragonfly was produced by

COBS PENINSULA FILM FESTIVAL – ENTER NOW! Peninsula Film Festival is thrilled to announce its new naming rights partner Cobs popcorn and together we are calling on filmmakers across the world to enter their masterpiece for PFF 2018! Enter your short film in the Cobs Peninsula Film Festival and you could win a share in up to $30K of cash and prizes and have your work seen by Industry heavyweights! 20 short listed films will be judged live on Saturday February 10, 2018 by top industry professionals with the winner taking out $5K

in cash, second place $2.5K cash and third place scoring $1250 cash! There are plenty more cool prizes including one on one meetings with distribution and production giant Madman Entertainment, an incredible URSA Black Magic Cinema Camera and awards for Best Animation, Best Documentary, Best International and the Woodleigh School Emerging Filmmaker Award (open to any Australian student under 18 years of age). There are also awards for Best Screenplay, Best Director, Best Actor and Best Cinematography. Entries are open

until Friday December 8, 2017. Films must be 8 minutes or less in length. Festival Director Steve Bastoni said the Festival offers an amazing opportunity for filmmakers to have their film seen by the most influential film practitioners in the business. “This is a great chance to rub shoulders and network with industry professionals. Filmmakers receive feedback from the best in the business. Our judging panel has included Screen Australia Board Member and Australian Director Rob Connolly, John Molloy (Mushroom Pictures),

Andrew Mason (Hopscotch) and we’re very lucky to have renowned Australian Director Fred Schepisi as PFF Patron”. Enter via https://filmfreeway.com/festival/ PeninsulaFilmFestival or head to www. peninsulafilmfestival.com.au for details. Save the date - Peninsula Film Festival: Friday February 9 – Sunday February 11, 2018. The FREE short film festival will be held at the Village Green in Rosebud on Saturday February 10, 2018.