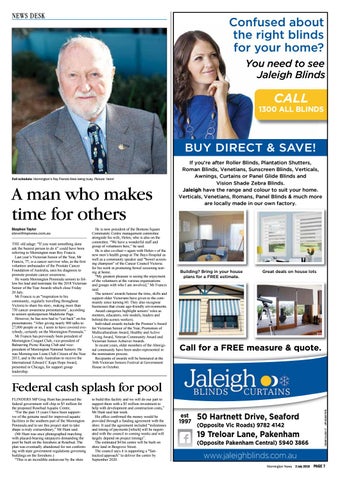 Confused about Confused the right right blinds blinds the for your home? for You need need to see You Jaleigh Blinds Jaleigh

A man who makes time for others Stephen Taylor steve@mpnews.com.au THE old adage: “If you want something done ask the busiest person to do it” could have been referring to Mornington man Roy Francis. Last year’s Victorian Senior of the Year, Mr Francis, 77, is a cancer survivor who, as the first volunteer ambassador of the Prostate Cancer Foundation of Australia, uses his diagnosis to promote prostate cancer awareness. He wants Mornington Peninsula seniors to follow his lead and nominate for the 2018 Victorian Senior of the Year Awards which close Friday 20 July. Mr Francis is an “inspiration to his community, regularly travelling throughout Victoria to share his story, making more than 750 cancer awareness presentations”, according to seniors spokesperson Madeleine Page. However, he has now had to “cut back” on his presentations. “After giving nearly 900 talks to 27,000 people or so, I seem to have covered everybody, certainly on the Mornington Peninsula.” Mr Francis has previously been president of Mornington Croquet Club, vice-president of Balnarring Picnic Racing Club and vicepresident of Mornington National Seniors. He was Morning-ton Lions Club Citizen of the Year 2015, and is the only Australian to receive the International Edward C Kaps Hope Award, presented in Chicago, for support group leadership.

He is now president of the Bentons Square Community Centre management committee alongside his wife, Helen, who is also on the committee. “We have a wonderful staff and group of volunteers here,” he said. He is also co-chair – again with Helen – of the new men’s health group at The Bays Hospital as well as a community speaker and “bowel screening champion” of the Cancer Council Victoria for his work in promoting bowel screening testing at home. “My greatest pleasure is seeing the enjoyment of the volunteers at the various organisations and groups with who I am involved,” Mr Francis said. The seniors’ awards honour the time, skills and support older Victorians have given to the community since turning 60. They also recognise businesses that create age-friendly environments. Award categories highlight seniors’ roles as mentors, educators, role models, leaders and behind-the-scenes workers. Individual awards include the Premier’s Award for Victorian Senior of the Year, Promotion of Multiculturalism Award, Healthy and Active Living Award, Veteran Community Award and Victorian Senior Achiever Awards. In recent years, older members of the Aboriginal community have been under-represented in the nomination process. Recipients of awards will be honoured at the 36th Victorian Seniors Festival at Government House in October.

Roman Blinds, Venetians, Sunscreen Blinds, Verticals, If you're after Roller Blinds, Plantation Shutters, Roman Blinds, Venetians, Sunscreen Blinds, Verticals, Awnings, Curtains or Panel Glide Blinds, Awnings, Curtains or Panel Glide Blinds and Jaleigh have the range and colour to suit your home. Vision Shade Zebra Blinds. All roller blinds locally made in Jaleigh have theare range and colour to our suit own your factory. home. Verticals, Venetians, Romans, Panel Blinds & much more 25% OFF Shade Blinds areVision locally made in our own “Zebra factory. Blinds”

to build this facility and we will do our part to support them with a $5 million investment to help with development and construction costs,” Mr Hunt said last week. His office confirmed the money would be provided through a funding agreement with the shire. It said the agreement included “milestones and timing of payments [which] will be negotiated with the council in coming weeks and will largely depend on project timings”. The estimated $43m centre will be built on shire land in Besgrove Street. The council says it is supporting a “fasttracked approach” to deliver the centre by September 2020.

FLINDERS MP Greg Hunt has promised the federal government will chip in $5 million for the proposed Rosebud Aquatic Centre. “For the past 15 years I have been supportive of the genuine need for improved aquatic facilities in the southern part of the Mornington Peninsula and to see this project start to take shape is truly extraordinary,” Mr Hunt said. (Mr Hunt was once photographed marching with placard-bearing ratepayers demanding the pool be built on the foreshore at Rosebud. The plan was eventually abandoned for not conforming with state government regulations governing buildings on the foreshore.) “This is an incredible endeavour by the shire