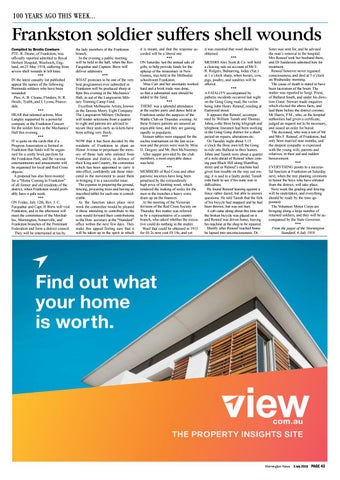 Frankston soldier suffers shell wounds Compiled by Brodie Cowburn PTE. R. Deane, of Frankston, was officially reported admitted to Royal Herbert Hospital, Woolwich, England, on 25 May 1918, suffering from severe shell wounds in left knee. *** IN the latest casualty list published appear the names of the following Peninsula soldiers who have been wounded: Ptes. A. B. Cleane, Flinders; N. R. Houfe, Tyabb,;and J. Lyons, Pearcedale. *** HEAR that talented actress, Miss Langley supported by a powerful company at the Frankston Concert for the soldier boys in the Mechanics’ Hall this evening. *** IT is quite on the cards that if a Progress Association is formed in Frankston that funds will be organised for a costly brick pavilion for the Frankston Park, and the various entertainments and amusements will be organised for local and Red Cross objects. A proposal has also been mooted for a “Home Coming to Frankston” of all former and old residents of the district, when Frankston would probably have a gala week. *** ON Friday, July 12th, Rev. J. C. Farquahar and Capt. H Brew will visit Frankston, and in the afternoon will meet the committees of the Mordialloc, Mornington, Somerville, and Frankston branches of the Protestant Federation and form a district council. They will be entertained at tea by

the lady members of the Frankston branch. In the evening a public meeting will be held in the hall, when the Rev. Farquahar and Captain. Brew will deliver addresses. *** WHAT promises to be one of the very best programmes ever submitted in Frankston will be produced sharp at 8pm this evening in the Mechanics’ Hall, in aid of the Langwarrin Military Training Camp Fund. Excellent Melbourne Artists, known as the famous Meery Eight Company The Langwarrin Military Orchestra will render selections from a quarter to eight and patrons are advised to secure their seats early as tickets have been selling very freely. *** NOW that it has been decided by the residents of Frankston to plant an Honor Avenue to perpetuate the memory of those lads who enlisted from Frankston and district, in defence of their King and Country, the committee which has been appointed to carry it into effect, confidently ask those interested in the movement to assist them in bringing it to a successful issue. The expense in preparing the ground, fencing, procuring trees and having an inscribed tablet for each one is considerable. As the function takes place next week the committee would be pleased if those intending to contribute to the cost would forward their contributions to the Hon. secretary at the “Standard” office within the next few days. They make this appeal feeling sure that it will be taken up in the spirit in which

it is meant, and that the response accorded will be a liberal one. *** ON Saturday last the annual sale of gifts, to help provide funds for the upkeep of the missionary in New Guinea, was held in the Methodist schoolroom Frankston. Miss Carr and her assistants worked hard and a brisk trade was done, so that a substantial sum should be added to the fund. *** THERE was a splendid attendance at the euchre party and dance held at Frankston under the auspices of the Wattle Club on Thursday evening. At these fixtures patrons are assured an enjoyable time, and they are gaining rapidly in popularity. Sixteen tables were engaged for the euchre tournament on the last occasion and the prizes were won by Miss D. Gregory and Mr. Bert McSweeney. After supper provided by the club members, a most enjoyable dance was held. *** MEMBERS of Red Cross and other patriotic societies have long been penalised by the extraordiraily high price of knitting wool, which rendered the making of socks for the men in the trenches a heavy extra drain up on the finances. At the meeting of the Victorian division of the Red Cross Society on Thursday this matter was referred to by a representative of a country branch, who asked whether the executive could do nothing in the matter. Wool that could be obtained in 1915 for £6 2s now cost £9 14s, and yet

it was essential that wool should be obtained. *** MESSRS Alex Scott &amp; Co. will hold a clearing sale on account of Mr E. R. Ridgers, Balnarring, today (Sat.) at 1 o’clock sharp, when horses, cow, pigs, poultry, and sundries will be offered. *** A FATALITY accompanied by pathetic incidents occurred last night on the Gong Gong road, the victim being John Henry Renouf, residing at Eastwood street. It appears that Renouf, accompanied by William Tainsh and Thomas Johns,—the three being telegraph and telephone linesmen had been working in the Gong Gong district for a short period on repairs, alterations etc. On Tuesday night about 5.15 o’clock the three men left the Gong to ride into Ballarat to their homes. Johns and Tainsh were about a quarter of a mile ahead of Renouf when coming past Black Hill along Humffray street and as Renouf’s machine had given him trouble on the way out owing, it is said to a faulty pedal, Tainsh rode back to see if his mate was in difficulties. He found Renouf leaning against a fence rather dazed, but able to answer questions. He told Tainsh that the fork of his bicycle had snapped and he had been thrown, but was not hurt. A cab came along about this time and the broken bicycle was placed on it and Renouf was driven home, leaving his machine at the shop to be repaired. Shortly after Renouf reached home he lapsed into unconsciousness. Dr.

Soter was sent for, and he advised the man’s removal to the hospital. Mrs Renouf took her husband there, and Dr Sanderson admitted him for treatment. Renouf however never regained consciousness, and died at 5 o’clock on Wednesday morning. The cause of death is stated to have been laceration of the brain. The matter was reported to Sergt. Priest, of Ballarat South, and under his direction Const. Stewart made enquiries which elicited the above facts, and laid them before the district coroner, Mr Harris, P M., who, as the hospital authorities had given a certificate, judged an inquest not to be necessary, and issued an order for burial. The deceased, who was a son of Mr and Mrs F. Renouf, of Frankston, had only been married nine months, and the deepest sympathy is expressed with the young wife, parents and relatives, in their sad and sudden bereavement. *** EVERYTHING points to a successful function at Frankston on Saturday next, when the tree planting ceremony to honor the boys who have enlisted from the district, will take place. Next week the grading and fencing will be undertaken, and everything should be ready by the time appointed. The Volunteer Motor Corps are bringing along a large number of returned soldiers, and they will be accompanied by the State Governor. *** From the pages of the Mornington Standard, 6 July 1918